Written by José I. Sierra, Editor-in-Chief of Univers Magazine where this article was first published.

Fr Ali Nnaemeka, OMI, is a Missionary Oblate of Mary Immaculate. He is an Igbo from the South-East of Nigeria. But for several years now, Ali has been a member of a 4-person team of missionaries working in eight Innu communities of the North-Coast of Quebec. The missionary team is composed of Oblates from Quebec, Madagascar, Cameroon, and Nigeria.

Fr. Ali was recently interviewed by José I. Sierra, Editor-in-Chief of Univers Magazine. 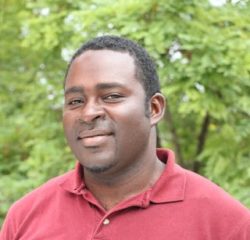 “It takes little more than an hour to fly to the community in Schefferville and more than 12 hours by train to make the same journey,” explains Fr Ali. “But as the flight ticket is very costly, I am obliged to frequently go by train.” “And that is why I spend two weeks in each of the missions every time I visit.”

This information on transportation that Ali gives us bring to mind a vast, enclaved and relatively hard to access territory. One can ask what pushes a Nigerian to leave his country to do mission work in Northern Canada. This is one of the questions I will be asking the missionary in this interview.

Jose: From Nigeria to Canada: Is it by chance that you are here?

Fr Ali: No, it was neither by chance nor by hazard … not even an act of Providence. It was wanted, asked for and planned. An Oblate colleague arrived in Canada two years before me and I was asked to come and join him here.

Already before that, when I decided to become a missionary priest, I had the desire to go on a mission far from my country. But during my formation years, I decided to stay in Nigeria. And just one year before my priestly ordination, my congregation asked if I wanted to go to Canada. After considering the propositions, I accepted it.

Jose: Why did you accept it?

Fr Ali: Because Native Mission in Canada was among the first missions of the Oblates. But there is another reason. I believe that the Canadian Church gave a lot to the world in terms of money, but also in terms of missionary support. Think of all these Quebeckers or Canadian missionaries who went on a mission to different parts of the world. To forget this Church that gave a lot to the world will be unjust and ungrateful.

Jose: So, how is your integration with the Native Community?

Fr Ali: At the beginning, it was not so easy. To better integrate to a new milieu, it is necessary to consider certain factors: it is important that the community be assured of your love for their reality, that you are there for them; it is also absolutely necessary to share their life, their vision of the world, etc. It must be a pastoral of presence in its full sense: presence in joy and in pain; presence in school, families, hospitals, etc.

Jose: I suppose you work mainly with Native Believers…

Fr Ali: In Native communities, it is very difficult to distinguish between Christians and non-Christians, for the simple reason that all members are believers. It is certain that not all the community members come to church. But we, the missionaries, we are there for everybody. We are at the service of all our community members. Our mission is not strictly to celebrate mass or sacraments. We are called to be members of the community we are sent to. I often visit schools to meet the youths and participate in their school activities; I visit cultural centers to take part in community activities; I also participate in Indigenous Youth Inter-band games, etc.

Jose: You are then much solicited?

Fr. Ali: It is really necessary for me to be there. I feel it mainly when there is a burial ceremony. There is going to be one these days. But here is the dilemma: I have a program tomorrow, here in Montreal, and I cannot then be in Schefferville. More still, my Oblate brother who normally replaces me is in a far distant area. But the community wants us to be there.

Jose: Do you speak with them in Innu? Do you speak their language?For example, each time we are absent in the community, they show it. And even when I have a program in another Church, there is always someone who comes to tell me that I am abandoning them. As a matter of truth, that shows that they love us. They are happy to have us among them.

Fr Ali: No, I do not yet speak the language. I have started understanding few words and that permits me to celebrate mass in Innu. For homilies, there is always someone who does the translation. My personal goal is to speak Innu. But I must confess that I find it a very hard language to learn because it is totally different from every other language I know. I have already been here for three years and I cannot yet speak Innu.

Jose: And Innu culture: Are there certain similarities with your own?

Fr Ali:  Of course! Native communities – even though we are from different regions of the world – have certain similar realities with what is observed among the Igbos of Nigeria. Native universe is more or less the same as the universe of my people. The place of the family in the life of an individual, for example, is as important to the Innu nation as it is to the Igbo people. The existence of an individual is always in relationship with the group the individual originates from.

There are also some similarities on a spiritual level. Among the Igbo, there exists a spiritual link between the individual and the cosmos. With the Innu nation, the universe is sacred.

When I arrived in Quebec and mainly in these communities, I discovered that I was among people who had similar values with my people, even if they are expressed differently. Having said that, I am conscious that one should be very careful not to assume to have understood the other, just because there are some similarities with one’s culture.

Jose: Apart from the similarities in your cultures, how do you live with the differences?

Fr Ali: Cultural differences intrigue me. And the more it intrigues me the more I question them and that pushes me to go beyond the known. I am someone who does not like comfort zones because this prevents me from growing. So, when I receive an assignment that presents some difficulties, I do not relent. On the contrary, it motivates me to face it and overcome it.

Jose: You do not feel discouraged?

Fr Ali: It does not mean that it is easy, but it is nevertheless a stimulating challenge. I am not easily discouraged because I take time to observe. Each time I arrive to the mission, I take a very important moment to observe, to learn and to ask questions to people.

My missionary program is based on the principle that I am sent to a people I am to walk alongside. If we observe the life of Christ, we discover that he was not spending all his time with the disciples, just to teach. He walked alongside them, and he observed them live. And when the disciples were hungry, he was hungry too. He was not detached from their reality even though he was the Christ.

Just like Christ, I walk alongside my community, here, as the community leader. But the leader is not more important than those he or she leads. The priest and his community must complement each other.

Jose: What sense do you give to your mission?

Fr Ali: There are two. As I mentioned at the beginning, it is first to maintain the Native ministry. Allow it to die away will be allowing a part of our missionary heritage to dissolve into the thin air. Secondly, to refuse to come and help this North Coast Mission will amount to being ungrateful to the Church of Quebec after all she did and continues to do in the world. For me, it is not like paying back. It is instead like a collaboration between Churches. The Church is like a family, and in the family, people help one another. All the members of the Church should not concentrate their effort in one place when there are other areas that need helping hands.

Going away from my country was not very easy for me. In Nigeria, I was in a mission I liked, in a parish that I adored. We had a school and we created a project for this school. I was dreaming to help these people that needed it.

The idea of leaving was almost like dying, for I had to leave behind my former mission. But I thought that there was more possibility of me being replaced in Nigeria than here in Canada. I then decided to come here … and I do not regret doing that! Because Canadian mission is essentially Native mission, among the Innus. If I must start over, I would do the same over and over.

The interview was first published in the October-November-December 2017 Univers Magazine, p.16-19.