By Will Shaw, from an interview with Artie Pingolt, President, Missionary Oblate Partnership

The Missionary Oblate Partnership held its 7th Annual De Mazenod Conference over the weekend of February 9-11, 2018 on the campus of Oblate School of Theology in San Antonio, TX.

This year’s conference brought the Partnership together with the U.S. Province’s Administrative Team to reflect and comment on three major areas of concern for the Province as it moves forward: “Sustainability,” “Ministry,” and “Vocations.” But why would the Administration come to the Partnership for input on its internal deliberations?

Officially, the Partnership was formed in June, 2006 in order to provide a new way for Oblates to engage with individuals and institutions who support the Oblate charism of evangelizing the world’s poor. The Partnership seeks to nurture a collaborative relationship between its members and the Oblates themselves. Partnership President, Artie Pingolt, goes beyond the boiler-plate statement:

“I think the Partnership has been kind of pushing an institutionally-reflective agenda, and it’s reflective of our membership, we have a number of partners who are involved in Church leadership, whether it’s in the U.S. Bishop’s Conference, in the foundation world, or among our non-Oblate Clergy Partners. We also have theologians, writers, innovators…even a Muslim and a Jewish member… it’s a body that’s growth-centered and question-asking, and I think the Oblates saw a variety of talent that they could draw on in an advisory capacity.” 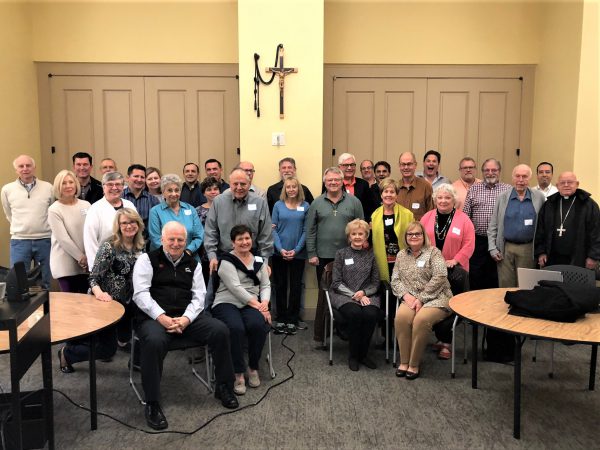 After two days of presentations and group discussions, the result was the formation of a working group that will narrow down the themes and specific suggestions from the meeting, which will then be matched with the Oblates, their resources, and convictions. Oblate Partnership Members named to this group include: Sermet Agolli; Bob Klosterman; Frank Gittinger; Shari Biediger; Ed Murray, HOMI; Fr. Lou Studer, OMI; Fr. Jim Chambers, OMI; Fr. Jim Brobst, OMI; and Artie Pingolt.

Looking back on the Partnership and its evolution over the years, Pingolt said, “Members started out being sort of a group of well-meaning and well-to-do individuals who really liked the Oblates and wanted to support them. I think we’re a much more diverse group than that now. Nevertheless, we’ll be continuing to deploy our resources in ways that advances the Province and the Charism. For example: this year we’ve launched the Partnership Mission Fund that responds to requests from Foreign Oblates. In this first year, that new fund has made grants to Oblate ministries in Chad, Tijuana, India, Paraguay, Peru, Haiti and here in the U.S.”

“I also think we’ll continue to be a “go-to” resource when needed. For example: when the Province wanted to build the School of Theology in Zambia, the Partnership funded nearly three-quarters of it. The Partnership also provided nearly 60% of the funds for the new residences at the Oblate Scholasticate in San Antonio.”

Information about the Missionary Oblate Partnership as well as the latest news on their activities is always available on: www.oblatepartnership.org