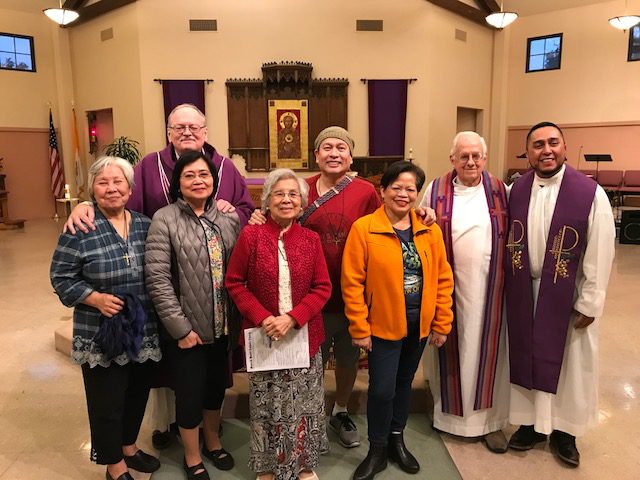 On Saturday February 17, 2018, the Oblate Associates of Oakland, California held their annual retreat. Afterwards at the 5 PM Mass at Sacred Heart Parish, they were led through the re-commitment ceremony by the pastor, Fr. Bill Mason, OMI.

At the morning session, the Associates met the leader of their retreat, Fr. Jesse Esqueda, OMI for the first time. Fr. Jesse traveled north to Oakland from Tijuana, Mexico where he is the Superior of the Oblate’s Baja Mission. There were introductions all around, followed by Morning Prayer, and Fr. Jesse’s presentation on the spirituality of St. John of the Cross.

After lunch, Fr. Jesse was joined by Fr. Scott Hill, OMI and the focus shifted to the Five Pillars of the Spirituality of Oblate Founder, St. Eugene de Mazenod. The Oblates explained the complimentary natures of the spiritualties of Saints John and Eugene, and how knowledge of them can help the Associates with their own spiritual journeys.

Fr. Jesse provided compelling examples of St. Eugene’s spirituality at work with a presentation of images of the poorest of the poor in the Tijuana Mission. The retreat concluded with a visit to the Blessed Sacrament, Oraison and Benediction. It was, according to Associate Eugenia Vallarta: “…the best retreat ever.”

Several Associates who were unable to attend the retreat, had already made their commitment three days earlier at the Ash Wednesday Mass celebrated by Fr. Don Arel, OMI at the Chapel at San Francisco International Airport. Arranging for Holyday and Special Masses at the airport is a long-time outreach of the Oakland Oblate Associates.

In all, nine Oblate Associates from Oakland made commitments either on Ash Wednesday at the airport with Fr. Arel, or on February 17, at Sacred Heart with Fathers Mason, Hill and Esqueda. The Associates are: Carol Bautista; Violeta Carabeo; Nennette Tabernilla; newest Associate Floren Domingo; Eugenia Vallarta; Rosenda Jardin; Lillie Villaluna; Ellen Peralta; and Guillermo Lagula.  Several Associates who were out of town will renew their commitments during the next Associate meeting.