On the night February 6, 2018, the Oblate Province of Brazil rejoiced with the official start of the work of its newest missionary front. We are talking about the two parishes that we took in the Diocese of Caicó, Rio Grande do Norte. 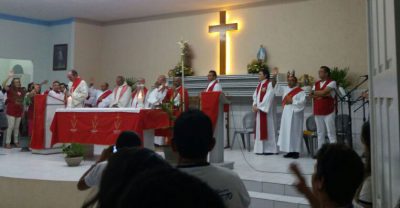 The Holy Mass was presided over by the diocesan Bishop of Caicó-RN, Dom Antônio, MSC, and was attended by the provincial of the Oblate Province of Brazil, Fr. Francisco RUBEAUX, the new administrators, and a portion of the people of God, who from now on are being evangelized by the Mazenodian charism.

Both parishes are located in a peripheral region of Caicó, greatly lacking in religious and social assistance. It is noteworthy that the territory of this particular Church is quite vast: in total it covers an area of ​​more than 9,000 square kilometers, with a population of over 300,000 people. 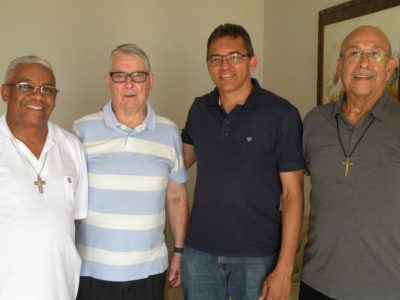 The diocesan Bishop, Antônio Carlos Cruz Santos, MSC, has been in charge of the pastoral government of this diocese since 2014. Ever since the first contacts between the Oblates and him were made, he has always been very open and welcoming, and thrilled with the possibility of having a Congregation caring for outlying parishes.

For the present, the Oblates of Mary Immaculate will be the only religious Congregation responsible for the pastoral care of a parish in the Church of Caicó. The other parishes are under the care of priests of the secular clergy. Let us accompany, with the help of our prayers, this new Oblate mission in Caicó, so that through the intercession of St. Eugene and Mary Immaculate, the people will be very well evangelized by the Oblates, and the Oblates will feel happy and fulfilled in this new missionary front God has sent us. (Fr. Sérgio DE SANTANA)