Thomas Benson, HOMI, 90, died on March 15, 2018 in Jefferson, Louisiana, with his wife, Gayle at his side. His body lay in state for public visitation for two days at Notre Dame Seminary in 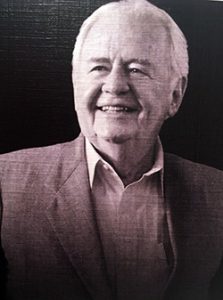 New Orleans. The Mass of Christian burial took place at the famous St. Louis Cathedral, formerly under the care of the Oblates, and was broadcast live on television on March 23. The presiding celebrant was  Archbishop Gregory Aymond, the local Ordinary. In the traditional “New Orleans style” funeral procession, his widow was seen carrying Tom’s Oblate Cross.

During his lifetime, he suffered the sad death of two wives and two of his adopted children. But he was a man of great faith and was extremely generous in supporting institutions of the Church, especially in New Orleans and San Antonio, Texas. The original “De Mazenod Scholasticate” building located at Oblate School of Theology in San Antonio was, a few years ago, renamed the “Gayle and Tom Benson Theological Center”. 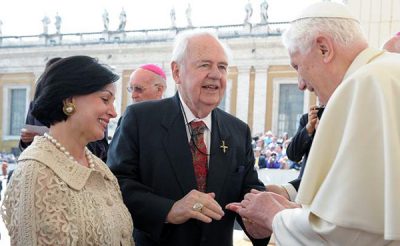 Fr. William MORELL, who knew him well, speaks more about Tom Benson’s Oblate connection. “He had a decades-long friendship with countless Oblates. During the many years Tom  lived in San Antonio, Oblates were constant guests in his home and at his ranch…and often at Saints games.  He was also a frequent visitor in Oblate houses and ministries, including the General House where he had come to visit his friend Fr Louie LOUGEN early in  his first year in office.  He and Gayle [Editor: his third wife] were married at the Immaculate Conception Chapel at Oblate School of Theology.

“Tom’s support of Oblate works, especially education and formation, was most generous.  He donated his former home in San Antonio to the Oblates and it still serves as an Oblate residence. Tom’s generosity to the Oblates covered decades. His substantial gifts helped endow Oblate School of Theology for the future. 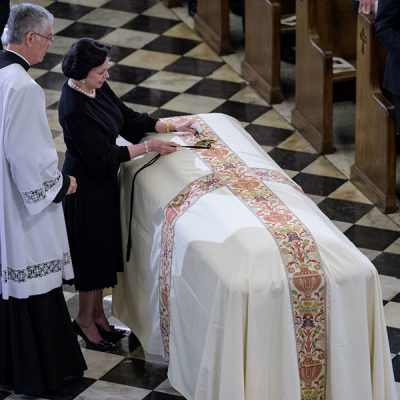 “In my many visits with Tom, I noticed he wore his little Oblate Cross with pride. On one visit to his office in New Orleans, Tom gestured to the wall covered with his many certificates, awards and honors. Then, with pride, he pointed to the Honorary Oblate certificate which was at the very center of the wall. He said it was put in the most important place for a good reason.  He said it was at the center of all his honors. It’s perplexing that none of the obituaries I have read of Tom mention anything about his 60 years of his deeply personal and markedly generous relationship with the Oblates. But, in fact, over the years that relationship has certainly been much more personal than public.  May he rest in God’s love… now a member of the saints in a whole new way.