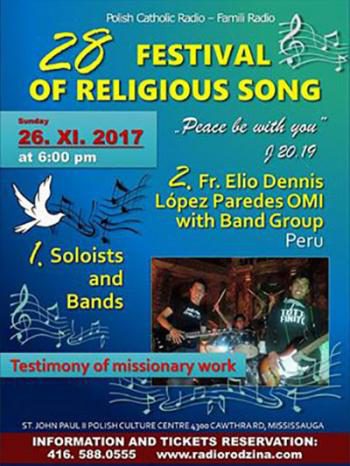 For the 28th year, the Catholic Family Radio organized the Festival of Religious Song, under the theme of “Peace be with You” (Jn 20:19) in the John Paul II Cultural Centre in Mississauga. In today’s society there is so little peace on earth, so little peace in our hearts, yet the participants all sang of the desire to search for the peace that Jesus Christ gives to all of humanity. All of the participants shared this universal message of Christ: those from Peru, those from Canada, and those from Kazakhstan, as the Festival had a particularly broad missionary feel to it this year. A reminder of the great gift of peace came from St. John Paul II, who, at the beginning of the Festival, was seen on the big screen through archival footage of his apostolic journeys and a song titled “Peace I leave you, my peace I give you.”

The guest of honour of the evening was Fr. Elio Dennis LOPEZ PAREDES and his band from Peru. Fr. Elio studied in Rome, writing songs that he stored in his desk until the moment when he went to his first mission in Orcotunie, Peru. It was there that he formed his band with local youth, “Banda 7”.

Fr. Elio, speaking during the Festival, said “We sing only to evangelize and encourage people to be open to God’s Love. We are not professional, trained musicians. We do not try to gain anything through our work — maybe only a place in Heaven.” 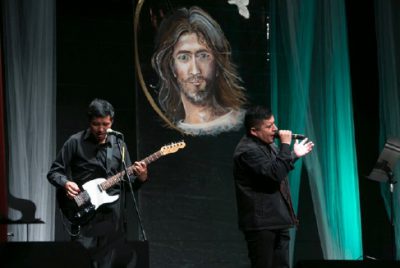 Banda 7 showed a new dimension of evangelization, through songs that they write themselves. All of the members come from different parts of Peru, meeting once every few months to carry God’s message to others.

They wore regional, colourful, traditional costumes from different parts of Peru. In the beautiful testimonies given by Fr. Elio, translated from Spanish by Fr. Marcin SERWIN, he spoke of his vocation and the faith he grew up with, especially touching on hope and love, which he learned from his mom. Members of the band spoke of their lives, their faith and evangelization of their communities.

Mr. Andrzej, who kindly drove the band for the few days they were in Toronto and the area, said: “I’ve never met such polite and undemanding young people, who were not ashamed to begin their meals at restaurants with the sign of the Cross, and who were so grateful for every little thing.” Maybe, therefore, it is worth organizing events like the Festival of Religious Song, to learn from people all over the world how we can change our view of evangelization and broaden the horizons of our faith. (by Kinga Fasciszewska, director of Catholic Family Radio in News and views, November-December 2017).