EDITOR’S NOTE: Originally, this article inadvertently identified Lazaro as a candidate for the priesthood, he is in fact, a candidate to be an Oblate Brother. This has been corrected and we regret the error. 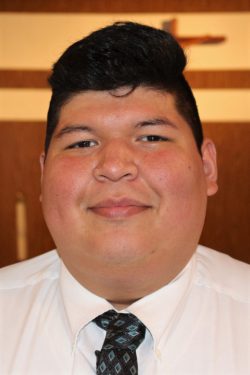 In 2016 Lazaro attended the ordination of a friend as an Oblate priest.  It was a special moment for Lazaro, when the young man realized he needed to follow a calling to become a Missionary Oblate, But Lazaro feels called not to the priesthood, but to be an Oblate Brother.

Lazaro was born in 1992 and grew up in Brownsville, Texas.  His parents were married by an Oblate in 1988 and Lazaro was baptized at the Immaculate Conception Cathedral in Brownsville which is staffed by the Oblates.

As a child Lazaro’s parents and family felt it was important to pass along their faith to their son.  Lazaro’s paternal grandmother, who lived in his childhood home, was particularly active in sharing her faith.   Lazaro was always involved with Church activities, participating in a variety of youth groups.

“In high school I wanted to grow deeper in my Catholic identity, so I decided to attend a Catholic college, and that is when my vocation journey really took a big leap,” said Lazaro.

Lazaro enrolled at Our Lady of the Lake University in San Antonio.  He joined the campus ministry program, becoming a sacristan and being involved with the music ministry.  The Oblates were working in campus ministry at the university at the time and Lazaro began to consider an Oblate vocation.  He contacted the local Vocation Director, Fr. Charlie Banks, O.M.I. who gave him an unexpected suggestion – don’t come.

“Father Charlie suggested that I finish my degree first because I was just a few semesters away from graduation,” said Lazaro.  “It was great advice because it allowed me time to form my own identity and finish what I had started.  It just wasn’t the right time for me to join the Oblates, and Fr. Charlie knew that.”

Lazaro earned his BA in Religious Studies and Theology.  He then spent a few months in the workforce before getting an invitation to attend an Oblate ordination for someone who had worked with Lazaro in the campus ministry program. 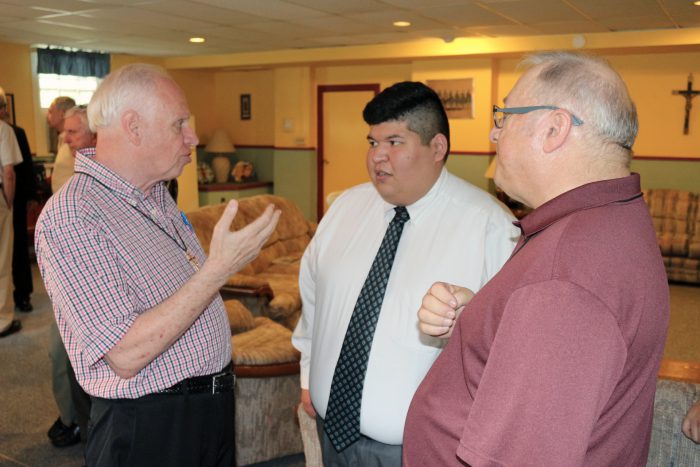 On the evening of his reception into the Novitiate Community in Godfrey, IL, Lazaro chats with Oblate Fathers Dale Schlitt (L) and Joe Ferraioli (R)

“I went to the ordination not as a discerner but as a friend,” said Lazaro.  “That day changed my life, and I knew it was time to join the Oblates.”

Lazaro jokes that when he arrived at the ordination he tried to avoid the vocation directors in attendance.  By the end of the ceremony, he was seeking them out.  Just three months later, Lazaro was a member of the Oblates’ Pre-Novitiate program in Buffalo, New York.  He spent a year there living in community with other young men discerning a calling to religious life.

Last August Lazaro entered the Oblate Novitiate in Godfrey, Illinois.  The novitiate year is a time to step away from society and deeply determine how God is calling one to serve.  Lazaro is spending his novitiate year with novices from Africa, Australia and North America.

“Today, as an Oblate novice, I am living in an international community of young men examining their calling to religious life.”  They have quickly become my friends” said Lazaro.  “Prayer is especially important during the novitiate year.  And I ask for your prayers as I continue on this amazing journey.”