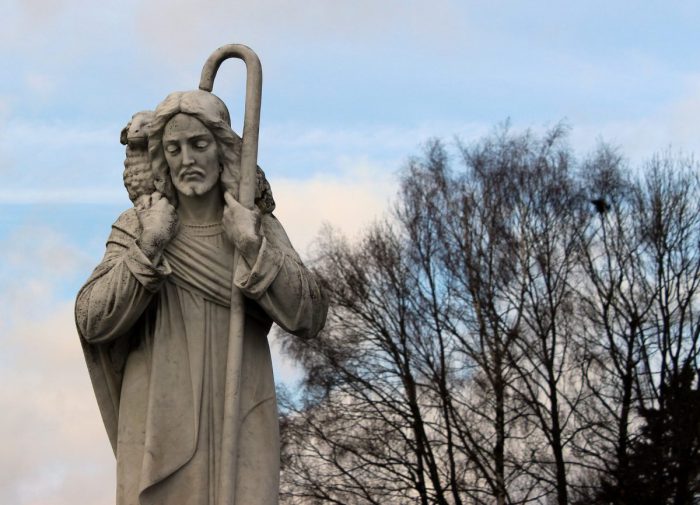 “Most parables we have don’t come with explanations; they come to us uninterpreted, as if they’re invitations from the evangelists to readers of every generation to say, ’This is in your hands. You take the responsibility for figuring out what to do with this.’”

Parables will always be open to new interpretations, a Vanderbilt University professor told an enthusiastic audience gathered at Oblate School of Theology for the school’s 10th Annual Montalbano Lecture on March 7, 2018.

Dr. Amy-Jill Levine, who is Jewish, focused on how first-century Jews would understand parables Jesus told, especially those of the Prodigal Son, the Good Samaritan, the lost sheep, the woman who lost 10 coins.

She said she discerned her vocation to teach Christian ministers how to read the New Testament after a childhood experience of being told by a Catholic student her own age, “You killed God.” Her mother assured her that God was not dead, but the girl decided she had to learn where such a horrible accusation arose from. She attended a Catholic catechism class and found no anti-Semitic teachings in the catechism or in the New Testament.

She noted the traumatic accusation occurred before the Second Vatican Council’s Declaration on the Relationship of the Church with Non-Christian Religions, Nostra Aetate, was promulgated.  She was interested in the New Testament because “It’s my story, too,” and is one of the best sources of first-century Jewish history.

“You can look at a parable of ‘The kingdom of heaven is like…’ and get multiple interpretations of it, some good and some not so good. You may have some of your own that work for you; I just want to add to them by giving a general sense of what people would have heard back then,” Dr. Levine explained.

Recalling the popular adage that religion is supposed to “comfort the afflicted and afflict the comfortable,” she suggested that if one thinks of “Blessed are the poor in spirit, for theirs is the kingdom of heaven” as comforting the afflicted, Jesus’ parables can be seen as afflicting the comfortable, since their purpose is to challenge Christians.

“Most parables we have don’t come with explanations; they come to us uninterpreted, as if they’re invitations from the evangelists to readers of every generation to say, ’This is in your hands. You take the responsibility for figuring out what to do with this.’ I actually think that when Jesus told a number of his parables, he left them open-ended to provide thoughts for conversation. She joked that “Peter would say, ‘We’ll talk with one of the Marys and we’ll get it.”

The merchant selling all he had to buy the pearl of great price would have made no sense to first-century Jews, the professor said, reasoning that had he sold everything he had to buy it, he would be destitute. He could resell it and make a profit, but that is not how the parable ends. Also, merchants were not trusted. “They would sell you things you didn’t need at prices you couldn’t afford, and by the time you’d realize you didn’t need it, they would be in the next town.”

Perhaps, she suggested, Jesus might have told the parable to encourage listeners to ask themselves what is the most important thing in their lives. Teaching in a maximum-security prison in Nashville, Tenn., she asked prisoners that question. One replied “freedom,” because he’d never realized how vital it was until he lost it. Another said “safety,” explaining he never knew when he would be attacked in prison. Levine she realized those two answers identified blessings she took for granted. She said she left the prison thinking, “How can I say I love my neighbor if I don’t know what the most important thing in his life is? Maybe the parable is designed to open us up like this.”

The professor noted that this makes sense in Greek thought. The Stoics had a term called adiaphora – things that are not essential to faith (things neither commanded nor forbidden). Paul was a Stoic, and in Philippians , he writes that his imprisonment is providing opportunity to evangelize the praetorian guards He was to be beheaded, but he is more concerned with using the time he has to evangelize the guards.

“Most people would think that being in prison under a death sentence was not good for Paul, be evangelizing is the only thing important to him. Everything else is adiaphora.

Dr. Levine noted that many people do not know what their own pearl of great price is. If they do know it, it takes courage to go after it. She described a student in her 40s who did and reported she was happier than she had ever been.

Dr. Levine said that early Christians referred to the Good Samaritan parable as “The Parable of the Man Who Fell Among the Robbers” because they were expected to identify with the victim, not with the Samaritan.  The early church and the late medieval church identified the Prodigal Son as a repentant sinner. Levine said the prisoners she taught identified strongly with him since his father, who was assumed to represent God, forgave him and welcomed him home. “They want the father to be God; they want God to love them, no matter what they did,” she commented.

Although not wishing to take away that reading, Levine said she doubts first-century Jews would have read it that way.