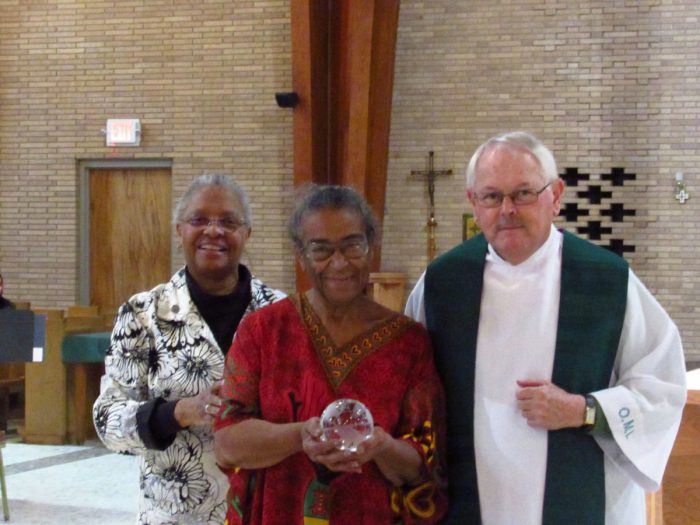 The Sankofa Institute for African American Pastoral Leadership conferred its Excellence in Education Awards for Lifelong Dedication to Education in the Black Community on Nettie Patricia Hinton, a community activist and  longtime member of Holy Redeemer Parish in San Antonio, and the Rev. Dr. Kelly Brown Douglas, Dean of the Episcopal Divinity School at Union Theological Seminary in New York City.

Each award, a small crystal globe symbolizing the Oblate world, was presented Jan. 30 at the end of Oblate School of Theology‘s weekly community Mass in the Immaculate Conception Memorial Chapel. A luncheon at the Oblate Renewal Center followed the awards ceremony.

Andrea Brooks, Hinton’s sister-in-law, noted that Hinton was the first black person from San Antonio to earn an undergraduate degree from UT Austin. After teaching fifth grade for three years at Abraham Grant Elementary School during the era of segregated public schools, she became a civil rights activist. She marched with the Rev. Dr. Martin Luther King Jr. and heard him deliver his famous “I Have A Dream” speech at the Lincoln Memorial Aug. 28, 1963.

Hinton became the first African American woman hired by the U.S. Customs Service for an important job in Washington, D.C. She served 30 years there, devising a training program for new workers, and in 1975 became a desk officer for Asia, Africa and the Pacific Basin with the customs service.

Since returning to San Antonio in 1993, Hinton has lobbied for better housing,  better schools and recognition of the East Side’s history and rich cultural heritage. Her grandmother, Isabella Brooks, an emancipated slave, walked the Pinto Trail from Fredericksburg to San Antonio and later became a home owner in the Saint Paul Square area. Presently, Hinton is working for preservation of the Hayes Street Bridge and the auditorium of the former Phyllis Wheatley High School. She serves on the city’s Martin Luther King Jr. Commission, the Arts and Cultural Commission and the Arts Commission. She also reads to the blind on OWL Radio and sings with the San Antonio Choral Society.

The Sisters of the Holy Spirit and Mary Immaculate at St. Peter Claver Academy taught her “who God was and whose I am, and that I was made in the image and likeness of God,” Hinton said in accepting the award. This knowledge helped her when she experienced segregation, as well as when she helped integrate the University of Texas in Austin in 1956 and each time she was the first black in any situation.

“I’ve been blessed,” she commented. “The Lord gave me gifts and talents. My family gave me over-the-top DNA and the opportunity to excel. I’ve been fortunate to live during times that have provided opportunities to be an activist in and for my community – not to go to hell, but to be a hell-raiser on earth.”

Dr. Diana Hayes, professor emerita of systematic theology at Georgetown University, accepted the award on behalf of Brown Douglas, a longtime friend, who could not attend. Brown Douglas was among the first African American women ordained to the Episcopal priesthood.

“She sought to introduce her students at Howard Divinity School to a reality viewed through the hermeneutic lens of an African American woman,” Dr. Hayes commented, adding that Brown Douglas’ first book, Sexuality and the Black Church,“caused a firestorm as she took on the issues of the Black body and was the first to address issues of homophobia in the black church. Her latest book, Stand Your Ground: Black Bodies and the Justice of God, provides a historical and theological foundation for the violent ‘Stand Your Ground’ culture that persists in the United States and the challenges it brings to the black community.”

At Goucher College in Baltimore,  Brown Douglas “was eminently successful” in turning lives around and ensuring that many who were seen as incapable of graduating did exactly that. She served as an associate pastor at Holy Comforter Episcopal Church in Washington, D.C., for 20 years and continues today to serve as canon theologian at Washington National Cathedral, Hayes said.

Today, Brown Douglas is plowing new ground as the inaugural Dean of the Episcopal Divinity School, which has merged with Union Theological Seminary.

A leader in womanist theology, racial reconciliation and sexuality in the black church, she has been cited as one of the most distinguished religious thinkers, teachers, ministers and activists in the nation by Essence magazine. She has inspired many colleagues and students to give back, to strive for excellence and to connect their educational aspirations with critical, communal justice issues.

The Sankofa Institute for African American Pastoral Leadership is an interdisciplinary, multidimensional academic, formation and professional leadership process for developing and supporting pastoral/church leaders committed to ministry and proclamation. All Institute programs foster an understanding and appreciation of African Americans’ contributions to Christian faith, life, and witness in North America and the world.