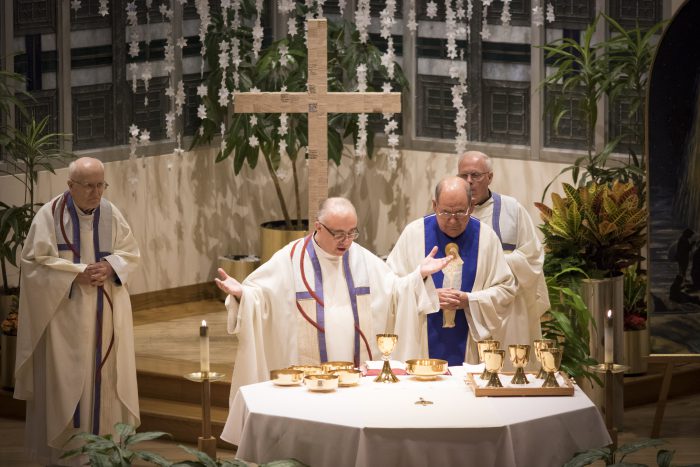 Fr. Knop during the 2017 healing and Hope Novena at the Shrine

Father Andy Knop, O.M.I. is the new Oblate Director at the National Shrine of Our Lady of the Snows in Belleville, Illinois.  His previous ministries and experience make him a perfect fit for such a role.

Father Andy grew up in Katowice, Poland as a member of the Sacred Heart of Jesus parish.  It was there that he first became acquainted with the Missionary Oblates of Mary Immaculate.  “I was an altar boy since I was seven years old.  The Oblate community at Sacred Heart of Jesus was a large one, with about 20 Oblates,” said Fr. Andy.  “We had missionaries come to the parish talking about missions and showing movies or sharing stories.  As I remember, they were very hospitable and encouraging.  I was involved in a vocation discernment group run by one of the Oblates.  I even participated in summer retreats for altar boys at the Oblate seminary in Obra where the seminarians help with the program”

It was in his 5th grade year that he noticed a vocation poster in the sacristy.  It read, “And you can become a Missionary Oblate of Mary Immaculate.”  Father Andy recalls, “It was a black and white photo with power lines hanging from posts.  I guess leading to the ends of the world?”  That poster prompted the young boy to consider spending his life serving others.

Father Andy’s family was very supportive of his decision to become an Oblate priest.  “My father told me after I was ordained that he prayed for me all that time to become a priest,” he said.  “He also did not have an easy time at his job during communism, when they learned that his son was in the seminary.  No promotions or anything like that.”

After ordination in 1989 Fr. Andy began perhaps his most memorable ministry: helping children grow in their faith.  “I went to a large parish in Poland as a parochial vicar for two years. My ministry was to lead children Masses every Sunday, as well as the children’s choir,” said Fr. Andy.  “I taught religious education classes in the public school for one year – working 21 hours a week – plus all the other parish duties.” 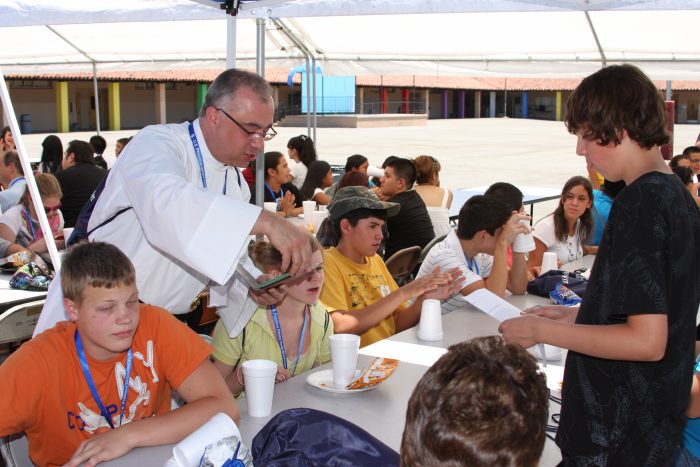 But in 1991 Fr. Andy was called to serve in a mission far from the comforts of home: the United States.  His work in the U.S. has been diverse and has kept him on his toes, always learning new things and moving to new places.

“In the U.S. I started in Chicago, Illinois by learning the English language and then went to Saint Paul, Minnesota to work at St. Casimir’s parish for two years,” explained Fr. Andy.  “After that I spent seven years in Duluth, Minnesota where I was involved in bringing two churches together and building a new church and parish center of Holy Family parish.  I consider Duluth my ‘home’ away from home and still keep in touch with some friends.”

Father Andy returned to Saint Paul in 2001 to become a Vocation Director for the Midwest area of the United States.  He remained there for six years.  Afterward, he took a sabbatical year in Rome and Aix-en-Provence.  “This was a time of reflection traveling across the country and not having much ‘success’ in finding new candidates but strengthening my own vocation and identity.  I enjoyed experiencing different cultures and people during my sabbatical year.”

His next role took him to Sisseton, South Dakota where he ministered on a Native American reservation – the Oblates’ Tekakwitha Mission.  “It was challenging but very interesting and educational,” said Fr. Andy.  “It was once my dream to work with the Native Americans in the Northwest territories in Canada, so this was my chance.”

From Sisseton he was sent to Tewksbury, Massachusetts to become a pastor of one of the largest parishes in the Boston Archdiocese: St. William of York.  “I spent seven and a half years as a pastor at St. William of York.  It was a very busy parish with many groups active in the parish,” Fr. Andy explained.  “We had the great privilege of having a Perpetual Adoration, which was a great blessing for many people.  I worked on a few projects in the church – painting, replacing church flooring and upgrading the Adoration chapel.”

While at St. William of York, Fr. Andy was able to work once again with something he is passionate about: the faith formation of children.  “The parish had a family Mass so it was great for me to get back to working with the children, having special homilies for them and playing guitar.” Father Andy loves working with children and leading children’s Masses, helping them grow in their faith while getting to know Jesus through sometimes ‘crazy’ homily ideas.

Father Andy’s latest move was made last summer, when he arrived at the National Shrine of Our Lady of the Snows.  “This is a new chapter for me and hopefully my previous experiences, mostly in the parish ministry, will help me to minister at the Shrine and help people on their journey.”

“The most surprising thing about being an Oblate, I think, is the unknown of going to many different places, meeting all sorts of people and sharing in their life journey.  How enriching this is – and all because of the missionary call.” 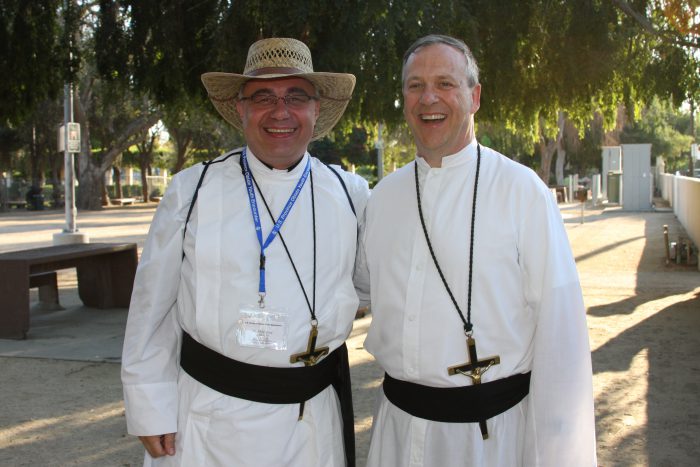