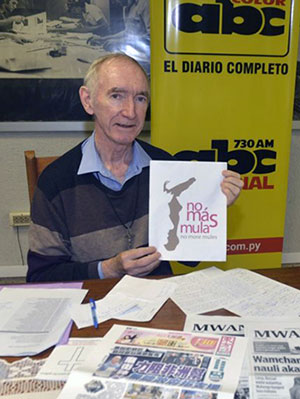 Father John WOTHERSPOON has spent much of his Oblate and priestly life as a missionary in Hong Kong, China. Originally from the Province of Australia, of which China is an Oblate Delegation, he went to Hong Kong as a teacher in a school run by the Oblates in 1985. Currently, he ministers as a prison chaplain. But this ministry has taken him from dark prison corridors to airports throughout the world as he travels to meet the families of prisoners who are behind bars because of their participation in smuggling illegal drugs. These were the “mules” that drug lords use to get their product across international borders. In effect, the “mules” are couriers who risk their own lives and freedom by smuggling drugs in their luggage, their clothing and sometimes even by swallowing plastic-wrapped drugs.

For the past few years, Fr. Wotherspoon has travelled to the homelands of some of these imprisoned “mules” to meet with the families they left behind and to enlist their help and the help of others to warn possible future “mules” of the dangers of getting involved with trafficking gangs. Among other means of communication, there is a Facebook account called: No más mulas – No more mules. He also works with government officials and judges in Hong Kong to get the laws regarding the sentencing of “mules” changed. In many cases, the vulnerable “mule” receives a harsher prison sentence than the drug traffickers themselves who often go unpunished entirely.

Late December and into January of 2018, the priest traveled thousands of kilometers to meet the families of prisoners from Central and South America and to spread the message of his campaign. His journey from Hong Kong took him to Mexico, Colombia, Venezuela, Suriname, Peru, Bolivia, Paraguay, Argentina and Brazil.

One of his means of communicating his crusade is to connect with the local media: newspapers, radio, TV. He often finds that a “mule’s” family member or friend knows someone in the media who might be interested in reporting this story.

One of the positive notes of this long journey into South America was Fr. John’s contact with Oblates in some of the countries. They could help him contact families of prisoners and also spread the message of his battle against the drug traffickers. In Ciudad del Este,  Paraguay, he met the local bishop, Mons. Guillermo STECKLING, former Superior General of the Oblates.

Here is a brief excerpt from his blog where he tells of a dangerous encounter with some of the drug traffickers in Sao Paulo, Brazil. In a large mall, he went to a place “…where the Nigerians hang out who have sent so many drug mules to HK and other places. Over the past few days I’ve checked the possibility of someone from police or media to accompany me….but (I found it) not possible/practical….so, with time running out…I went today by myself. I had my Cross on, identified myself and was taken by a ‘lookout’ to the cafe where the group of men hangs out. When some of them saw me they criticised the lookout for taking me to their location….but he cooled them down …and I shook hands with each of them and gave each of them my card… and told them I was helping Biafra (Eastern Nigeria where they all come from) before they were born (I helped organize a walkathon of some 10,000 Monash University students in Melbourne to raise funds for the people starving in Biafra during the civil war). The items I gave out were immediately taken up a staircase inside the cafe to someone further up the ladder ….

“I made a fairly prompt exit….feeling like someone who’d just thrown a hand grenade into a nest of soldiers….and I took a taxi … to make sure I wasn’t followed. 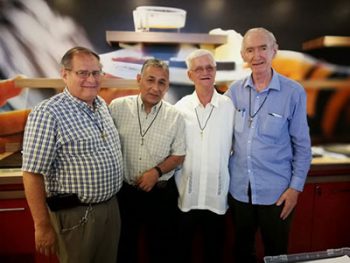 My lookout was in fact quite kind…he’s an asylum seeker…been here 2 years he said…said his name was Bobby. I had told him how I’d been to Africa 3 times, had saved maybe a 100 Africans from going to prison in HK, was trying to stop S. Americans from going to prison, just wanted the whole drug mule thing to stop. He was half sympathetic, half threatening…not really sure if I was crazy or what.

“Maybe my action was crazy, but I have a feeling that it…together with a few other activities of these days….will cause a noticeable reduction in the number of poor people from this part of the world going to prison in HK.