By Will Shaw with Dennis Kempf,   Photos by Bill Magrath 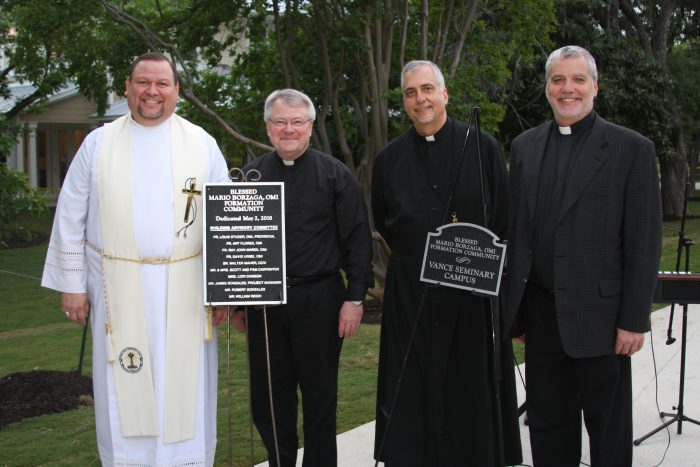 On May 2, 2018, the five new residence buildings of the Bl. Mario Borzaga Formation Community were dedicated at Oblate School of Theology in San Antonio, TX. This “Vance Campus” (in honor of Vivian Vance’s leadership gift) is located directly across the street from O.S.T., and the Oblate seminarians will live, study and be formed there beginning in August of 2018.

Each house has a formator’s suite and four bedrooms,  a kitchenette and a large common space.  These are for a chapel, a library, a meeting space/classroom , a living room and the community dining room.

CPG and the Oblate Partnership raised over 3 million dollars for the construction of the new residences.  Any funds raised over construction costs will go towards seminarian formation and education.

Dennis Kempf, Director of Oblate Charitable and Planned Giving, described the special celebration held the night before the dedication: “Right before the big gala dinner, 40 to 50 people took personal tours of the residences. Then there was a happy hour followed by a delicious dinner attended by nearly 100 people.  There, U.S. Provincial, Fr. Louis Studer, OMI personally thanked the donors as well as all who helped bring this dream to fruition.”

“One of the most impressive things was that there was a scholastic and an Oblate at every table, engaging with the donors and all those who helped bring this project to fruition,” said Kempf. 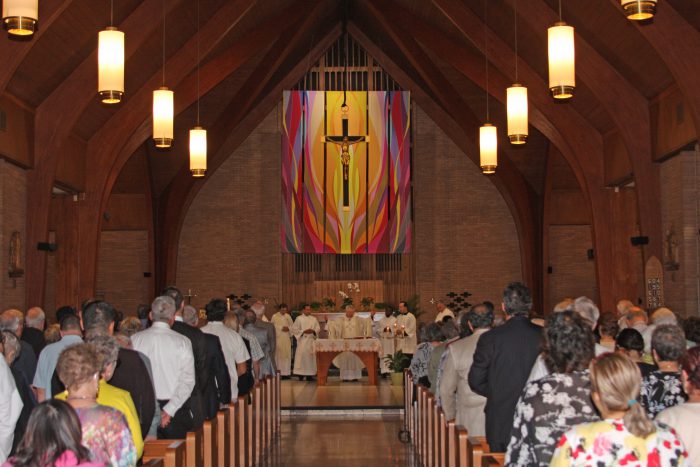 Fr. Louis Studer presides over the Mass of Thanksgiving

The next day, May 2, U.S. Provincial, Fr. Studer presided over a Mass of Thanksgiving held at the Chapel on the grounds of Oblate School of Theology. The 400 or so members of the congregation were donors, Oblate partners, Oblate Associates, Oblate priests and brothers, Oblate employees, neighbors and friends.

After Communion, Fr. Art Flores, OMI, Vicar-provincial for Personnel thanked the donors and all those who contributed to the residences. He also gave some background on Bl. Mario Borzaga, whom the scholastics chose as the patron of the new community. Fr. Borzaga was an Italian Oblate and one of six Oblate missionaries who were killed in Laos during that country’s civil war and communist take-over. He and 16 other Martyrs of Laos were beatified in December of 2016. Known as the Martyrs of Laos, they include a Laotian priest, eleven European missionaries (including the six Oblates and five priests from the Paris Foreign Mission Society) and five lay catechists. They were killed between 1954 and 1970. 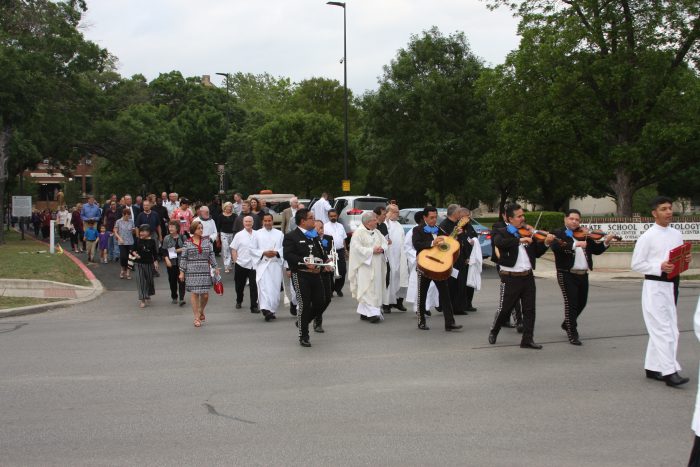 Fr. Art then asked the congregation to follow the mariachi band who led them in a procession from the church to the Vance Campus.  There, the community was formally blest, after which five priests blest each of the buildings individually before the final prayer ending the dedication ceremony and Mass.

Many of those gathered then took tours of the residences, and according to Dennis Kempf, some of the scholastics were happy to point out which rooms will be theirs. He said a unique feature of the residences is that they are designed to simulate the experience of living in a rectory for the future priests and brothers: “Oblates live in community with three or four men, where they have to learn to get along, clean, cook, do the dishes… so the scholastics will experience all the elements of living in community.” 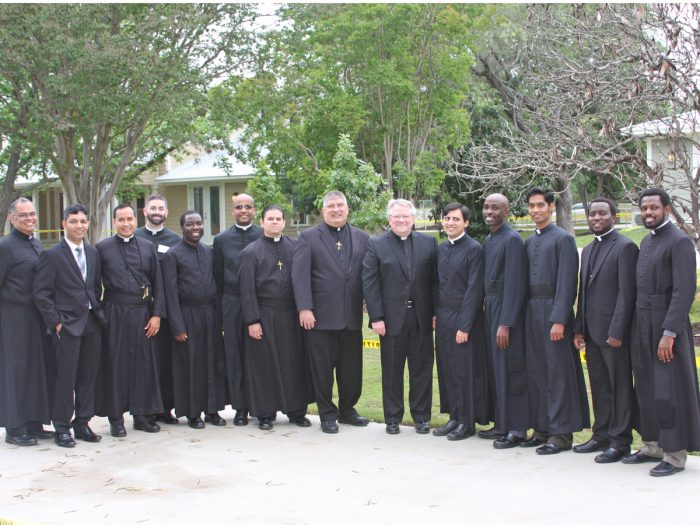 Superior, Fr. Raul Salas, OMI is at Center left, next to U.S. Provincial, Fr. Louis Studer on the right. Both are surrounded by the Scholastics who will soon move into the new residences

The two days of celebration and thanks was summed up by Dennis Kempf: “It was just really well received all the way around, the donors felt like they made a difference and they could see what they did. I think Brother Victor Manuel Patricio-Silva (who will be ordained May 18, 2018) spoke directly to the generosity of the donors at the end of the first night’s celebration:”

“I am honored to speak on behalf of these scholastics that were sitting among you.  I hope you have enjoyed getting to know them.

Thank you for your support.  So many here have donated their time, their resources and their experience to build these residences.  So I have a question for you.   What is the gift of all your generosity?

You are partially correct if you said that you helped build these five houses.  But what REALLY is your gift to the Oblates and to the world???