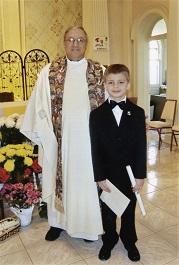 I guess my vocation story could be considered one of starts and stops. Growing up in Tewksbury, MA our family lived in St. William’s parish, an Oblate ministry. Oblate priests taught me how to serve Mass and interacted with me as a boy and teenager. One in particular, Fr. Michael Devaney, invited some of us boys to attend a Workshop Week at the Oblate Minor Seminary in Newburgh, NY. That was my first start. I went when in the 8th, 9th and 10th grades. There I met Oblate Scholastics and learned more about this missionary order. Going to Sacred Heart Grade School and St. Joseph’s High School in Lowell placed me in two more places where Oblates were working: Sacred Heart Church and St. Jeanne Baptiste Church, right across the street from my high school.

Every priest I had ever met wore a cassock and a cross. I thought all priests were Oblates, so naturally when I considered priesthood it would be as an Oblate. Two years in the minor seminary in Newburgh were my second start then it was off to Godfrey for Novitiate where I experienced my first stop. By the middle of January of my Novitiate year I felt like this was not the life for me, feeling like there was a great big world out there just waiting for me and I was tucked away on the bluffs of the Mississippi. I decided to leave and see where life would take me. But, after going home, getting a job and wondering about my future in a more mature manner, I reconsidered the priesthood and sought re-admittance to the Novitiate. I got it and had to begin the year all over again, but this time I completed it.

My years in the scholasticate in Washington were challenging academically for me, but I loved going out in the summer to do ministry and was certain this was the life for me.

Ordination came in 1977 and for 25 years I was a reasonable happy priest working in various places. In 2002 as I approached my 25th Anniversary of ordination, a mid-life crisis hit. I was somewhat bewildered and confused. I asked for a leave of absence which was granted for about a year and a half. That was my second stop. The time afforded me the opportunity to deal with some issues in my life and repositioned me again for ministry.

My final start was a return to ministry and my Oblate life in 2004 and now 14 years later, things have definitely leveled out. Through it all God’s love for me has been manifest and His guiding hand has helped me through all the starts and stops. The next stop will be judgement day for me and I intend to keep moving forward until then in a life that has given complete meaning to my existence.

One thing is for sure, if God is calling you, He will sustain you through it all. Praised be Jesus Christ and Mary Immaculate for sticking with me.