The permanent committee for the Oblate Constitutions and Rules held its fourth meeting in Rome, from May 22 to 24. The committee was established by the Superior General in Council during the plenary session of January-February 2016. Its members are: David LÓPEZ MORENO (Mediterranean Province), Bernard KERADEC (France), Raymond WARREN (Anglo-Irish Province), the Procurator General to the Holy See (David KUMAR) and a member of the General Council (Paolo ARCHIATI). Fr. Arun ROZARIO serves as Secretary.

In dialogue with the Superior General and his Council, the committee is presently working on three areas: the first is the implementation of a recommendation of our last General Chapter: “The 36th General Chapter recommends to the General Administration that it begin a deeper reflection and study on the reality of community in our Congregation in view of the Mission, and the nature and place of District communities in our Oblate life and mission.”(Acts of the Chapter, p. 65) 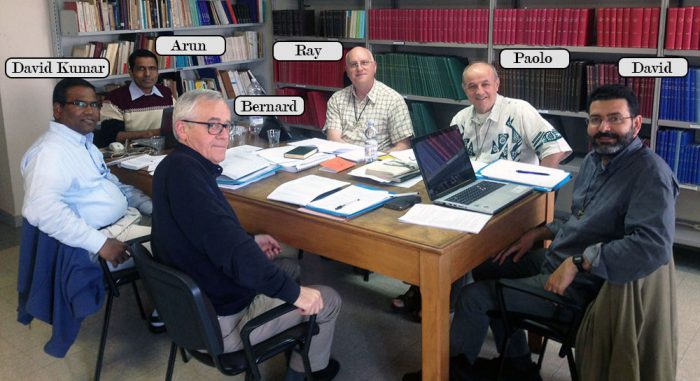 The second is to animate the Congregation in relation to the “gift” of our Constitutions and Rules. We celebrate this year the 200th anniversary of the first Rule, written by Eugene in 1818 and approved by the first General Chapter in October of the same year.

The third will involve reviewing the text of our Constitutions and Rules. Through the years we have become aware of its richness but also of the need to review and improve the text. There are a number of inconsistencies in the text, problems with translation, but we are also asking ourselves whether some sections of the text should not be revisited or rewritten, considering the changes that have occurred in the Church and in our Congregation in the last 40 years (the present text was written in 1980).

The committee, that can be reached at OMICCRR@gmail.com, is open to receive suggestions from the Oblate world in order to better accomplish its work. It will also become the “natural” reference point for all the proposals related to our Constitutions and Rules that will be addressed to the General Chapters.