Originally Published by the BBC 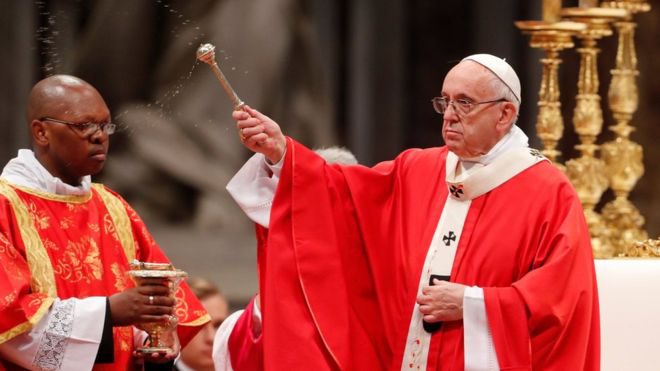 The Vatican might seem an odd place for a gathering of oil executives.

But leaders from some of the world’s biggest energy companies have gathered in the Holy See this weekend.

Pope Francis is expected to address the group on Saturday on a subject he has made one of his signature issues: climate change.

Under Pope Francis’ leadership, the church has moved to confront the business world on a range of subjects from poverty to tax havens and complex financial securities.

He put climate change front and centre back in 2015, when he devoted his second encyclical to the topic. But there has been no detail yet as to the precise message he will deliver to his room of high powered executives.

In the 2015 missive, he described the issue as “one of the principal challenges facing humanity in our day”, and one with particularly big implications for the poor.

At that time he said the international political response had been ineffective and pledged to use his pulpit to draw attention to the issue.

“We need only take a frank look at the facts to see that our common home is falling into serious disrepair,” he wrote. “I urgently appeal, then, for a new dialogue about how we are shaping the future of our planet.”

The conference titled “Energy Transition and Care for Our Common Home” has been organised by the University of Notre Dame in South Bend, Indiana.

The university declined to say what was on the agenda, saying participants had requested confidentiality in order for frank conversations.

Seamus Finn is chair of the US-based Interfaith Center on Corporate Responsibility, which has pressed firms like ExxonMobil to do more to address climate change, including by investing in renewable energy companies.