Click here or on the photo to see the video on KVEO.COM 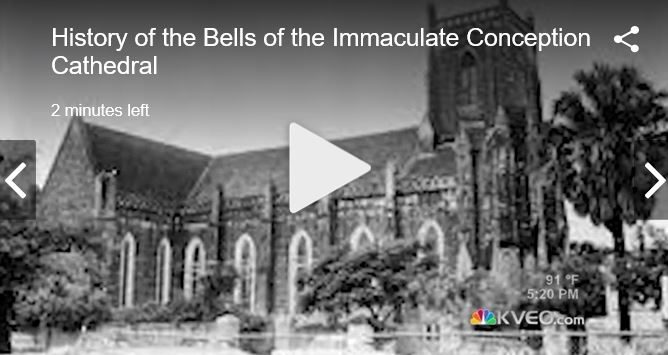 BROWNSVILLE, Texas – The Immaculate Conception Cathedral in Brownsville is one only two churches in the world that are affiliated with at St. Peter’s Basilica in Rome.

“Because it supposedly has a sliver of the Holy Cross as an artifact here,” said Eugene Fernandez, Historic Brownsville Museum Manager.

It all started in 1850 as a small wooden church, that was then taken over by an architect in France and built in a Gothic revival style, made possible by generous contributions.

“The way that these bells came here was rather interesting. Mifflin Kenedy was involved there was a Father Parisot who was an Oblate who was looking for the completion of the cathedral package and he wanted to have a concert and charge admission to help pay for the bells,” Fernandez said.

The bells bear the names and christening dates of the Kenedy children.

“Mifflin Kenedy stepped in because Father Parisot wanted Sarah Kenedy, his daughter, to sing in the pageant. Kenedy said she’s too young I don’t want that to happen. In order to avert that he gave Father Parisot a check for $2,000 in gold and that’s how we have the bells here,” he said.

“Father Parisot was fretting because you can’t have a beautiful cathedral like this without bells or chandeliers, which  were donated or brought in from Paris by Captain Jeremiah Galvan,” Fernandez said.

The Gothic Revival style church was completed and blessed on June 12, 1859, and the bells were restored in 2016 by Frank and Mary Yturria.

“[Yturria] has to be acknowledged in this by the generosity of his heart he gave so that these bells could be preserved,” he said.

(Editor’s Note: Thanks to Fr. Kevin Collins, OMI for making us aware of this story)