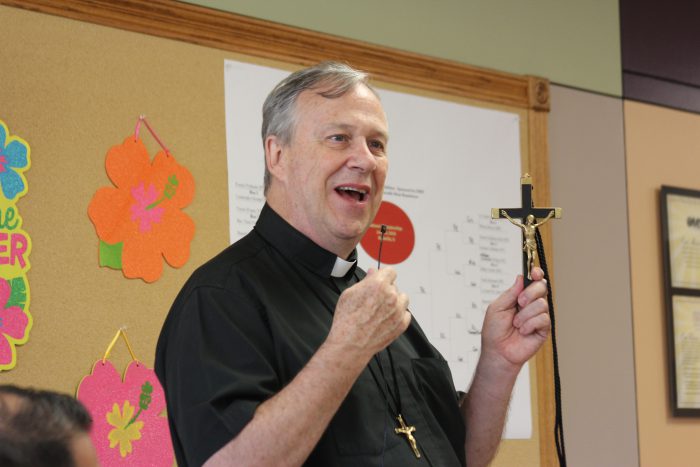 Superior General Fr. Louis Lougen holds up the Cross of St. Eugene while addressing the employees of the Missionary Association

The Most Rev. Louis Lougen, OMI, Superior General of the Missionary Oblates of Mary Immaculate spent a few days in Godfrey, Illinois and nearby Belleville during his recent visit to the United States.

Having arrived in the states around June 1st he spent time in Washington, DC, Lowell and Tewksbury, MA, and Buffalo NY before heading to the Oblate Novitiate in Godfrey, Illinois where he arrived on June 13th.

Novice Master, Bro. Pat McGee, described the General’s time in Godfrey: “We were happy to have Fr. Louie with us in the Novitiate community.  He was able to join us for Evening Prayer and dinner, to meet with the formation team, preside at Eucharist, and to share with the novices and staff in an informal conversation and Q&A session.  One of the highlights was passing around St. Eugene’s Oblate Cross, allowing each one time to pray with the Founder’s Cross.  We keep Fr. Louie in our community prayer and are grateful for his visit.”

Interviewed at the Novitiate before heading on to the Shrine of Our Lady of the Snows, Fr. Lougen was asked how it felt to be back in the U.S.: “I have received so much affirmation and support, it’s good to be home. I say the world is my home now, but the roots are here.”

Asked about his impressions of the U.S. Province after being out of the country for so long, Fr. Lougen said, “I have been mostly in Oblate gatherings so I really haven’t seen the mission here. Just before I came to the states, I was in Canada for a meeting. There were Oblates from Canada and the states looking at the future of the region and you know, it was immensely hope-filled. The Oblates have a lot to give to the Church in the U.S. and Canada. The reality is we’re aging, we’re fewer, but we’re very much alive, we have a lot to give to the Church and to the people of God.”

“I was in Buffalo (NY) and saw a little bit of the mission there. It’s always impressive to see how an old neighborhood – where the churches were emptying out – is now changing with so many immigrants.  St. Eugene would be delighted to know that. To see parishes rebound is a beautiful thing.” 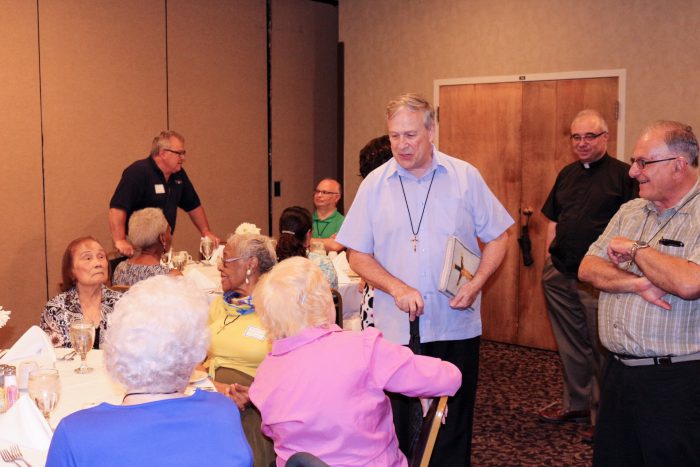 Fr. Lougen visits with Associates at the dinner. Bro. Tom Ruhmann is on the right and Fr. Andy Knop is in the right rear

On June 14, Fr. General went to the Shrine of Our Lady of the Snows in Belleville to attend a gathering he requested to have with local Oblate Associates. A long-time “booster” of the Oblate Associates, I asked if he retained his enthusiasm which brought an immediate response: “I am extremely enthusiastic! In fact, I recently wrote a letter that got me in trouble: somebody said, You’re more enthusiastic about the Associates than you are about the Oblates, you’ll have to change that letter, laughed Fr. Lougen.  He continued, I use the image of my brother’s garden, I called it the “German Garden,” everything was in perfect rows, arranged according to height, just really well organized. My sister’s garden on the other hand was the opposite, she just threw seeds, you’d have tomatoes mixed with corn, a few sunflowers popping up, just wild abandon. In a sense, the Oblate family is like that, we have so many groups which are an expression of the richness and creativity of the Charism, it’s stunning.” 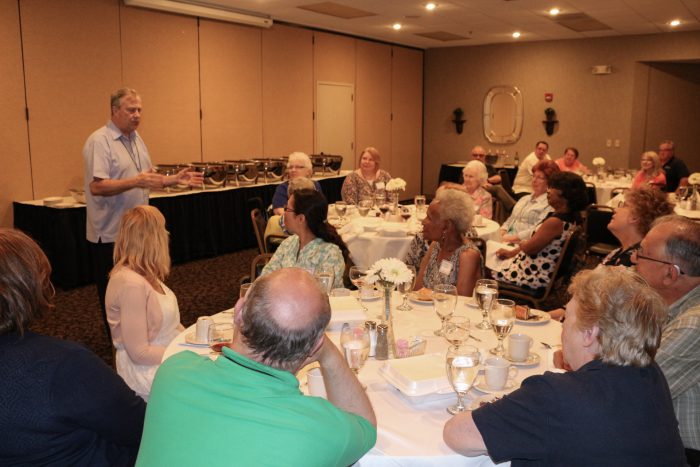 Fr. Lougen has Q & A with the Associates

That evening at the Shrine was coordinated locally by the Director of Hispanic Ministry, Fr. Juan Gaspar, with dinner provided by Shrine Director, Fr. Andy Knop. The Oblate Associates from The Shrine and King’s House Retreat Center enjoyed socializing with the Superior General, as well as with Fathers Knop, Gaspar, Harold Fisher, and Brother Tom Ruhmann. After dinner, Fr. Lougen gave a short talk where he passed on a greeting and blessing from Pope Francis, then took questions from the Associates.

National Director of Mission Enrichment and Oblate Associates, Geri Furmanek said, “Oblate Associates were very appreciative of some special moments of the visit:  the message from the Pope, the blessing with St. Eugene’s Oblate Cross (and the opportunity to see and touch it), Fr. General’s interest in how the Associate’s live the charism in the work they do and the people they encounter.  What a privilege to spend such a nice evening together!” 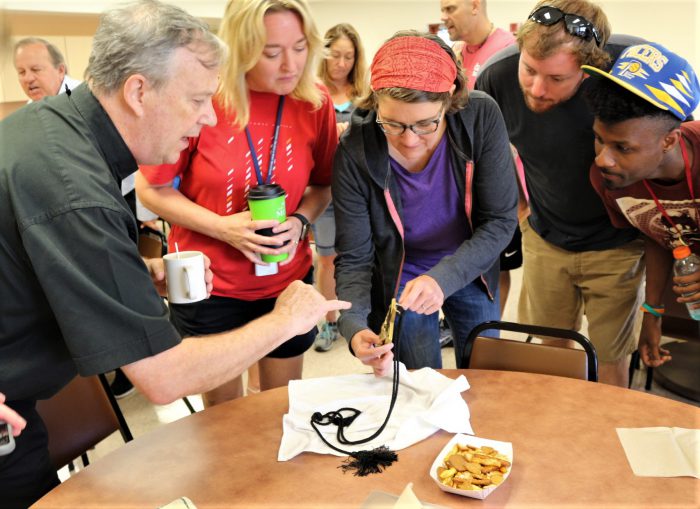 On Friday June 15, Fr. Lougen visited with the employees at the Missionary Association in Belleville expressing his appreciation for their efforts raising funds for Oblate ministries around the world. He also took questions and invited the audience to touch the Cross of St. Eugene de Mazenod.

On Saturday, Fr. Lougen was off to San Antonio for a short stay before heading back to Rome and another trip to India at the end of June.  Fr. General’s next scheduled visit to the U.S. coincides with the U.S. Province Convocation in 2020.