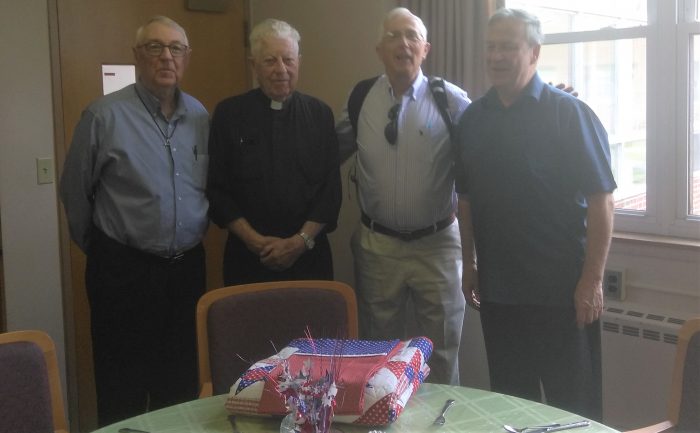 Pat Healy has received several honors recently.  On Monday, June 10, he received a Quilt of Valor, which are given to Veterans of the US Military.  The quilt was made by Mrs. Michael (Vaughan) Winter, Father Harry Winter OMI’s sister-in-law, brought to Tewksbury by her husband Michael Winter, and blessed by Fr. General, Louie Lougen, OMI.

Pat recently received the Veteran of the Year Award from the Abraham Lincoln Post 11, GAR (Grand Army of the Republic).  The award stated “Thank You Father Healy for spending your career selflessly tending to the needs of our Military Personnel.”

On May 18, when the USS Constitution was led by tugboats to Fort Independence, Boston Harbor, for its semi-annual turnabout, the U.S. Navy invited Vietnam vets to board the ship.  At the barbecue after, Pat led the blessing.

His book, The Finger of God, which describes his early service in the military, has attracted many readers.

A recent military journal describes Pat, at age 97, as the chaplain who has unretired the most of any military chaplain.  He currently serves as the full time chaplain at St. Michael’s Chapel, the Soldier’s Home, Chelsea, MA.