Originally Published by The World Council of Churches, 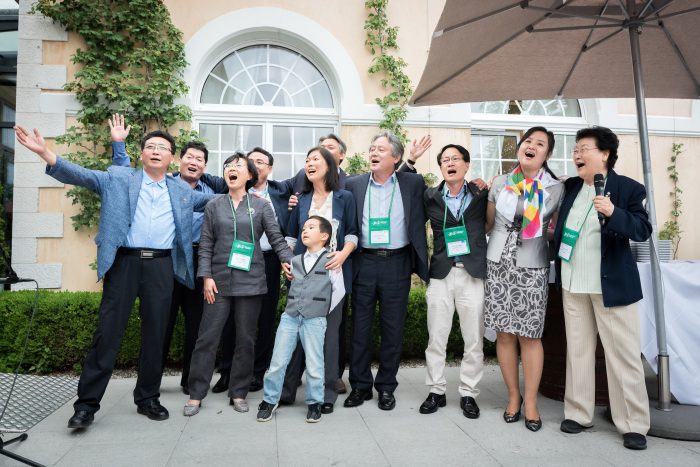 Christians from North and South Korea sing together during celebrations of the 70th anniversary of the WCC. Photo: Albin Hillert/WCC (This celebration took place at at Bossey, mentioned in the June 13, 2018 article on the Pope’s visit to the World Council of Churches

In a powerful symbol of unity, Christians from North and South Korea sang together yesterday during celebrations of the 70th anniversary of the World Council of Churches (WCC). The Koreans linked arms to sing the 600-year-old folk song Arirang that is the unofficial anthem of Korea – the united Korea that existed until civil war divided the country in the 1950s.

“Today is a day of joy and dancing. We are presenting this programme as one Korea,” WCC’s Asia region president Rev. Dr Sang Chang told the crowd of more than 350 Central Committee members and guests who had gathered for the festivities. “We thank you for praying with us for peace.”

The words of what is the most popular folk song on the Korean peninsula say: “Just as there are many stars in the clear sky, there are many dreams in our hearts”.

The presentation by a group of 15 WCC Central Committee members, advisors, and guests included singing the hymn “Nearer my God to thee” with Rev. Myong Chol Kang at the piano. Kang is the chairman of the Korean Christian Federation in the Democratic People’s Republic of Korea (DPRK). The singing of Arirang was led by North Korean Kum Gyong Ri on Korean drum and Hanbeet Rhee from South Korea on piano.

WCC is active in promoting dialogue and peace between the DPRK (North Korea) and the Republic of Korea (South Korea).  The delegations from the two Koreas are attending meetings of WCC’s Central Committee currently underway in Geneva.

The theme of unity ran throughout the day of anniversary celebrations that began with an ecumenical service at the city’s historic Saint Pierre Cathedral. The sermon by the Orthodox Church leader His All Holiness Ecumenical Patriarch Bartholomew offered insight into the history of evolving relationships among Orthodox and Protestant churches within the WCC.

The cathedral, home to a congregation of the Protestant Church of Geneva, was filled to near capacity by local church members and representatives of WCC member churches. Throughout the service, prayers, Bible readings, and songs were offered in some of the many languages of the WCC fellowship including French, German, Arabic, Chinese, and Malagasy.

The celebration at Bossey that followed the church service featured messages of congratulations from the chairman of the Pentecostal World Fellowship, Dr Prince Guneratnam, and from Dr Philip Lee, general secretary of the World Association for Christian Communication. WCC’s regional presidents led a variety of celebratory presentations from their respective regions. Songs, dancing, laughter, and expressions of gratitude marked the celebration by the global fellowship.

Young stewards working in support of the Central Committee meeting offered a song and a message reminding older committee members that youth are “the WCC of today and tomorrow” and suggesting they be offered the chance to play a larger role in the organization.

As the anniversary cake, topped by green icing, was cut by WCC Central Committee officers to mark the end of the day of celebration, WCC general secretary Rev. Dr Olav Fykse Tveit told the crowd: “We share a cake as we share our life together. A green cake is a symbol of a green future as pilgrims of justice and peace. Let us continue to pray together.”

70 years of the World Council of Churches

Meeting of the Central Committee of the WCC

(Notes on this article from Fr. Harry Winter, OMI)

A second link of Oblates with the anniversary comes from Pope Francis’ mention of Catholics being full members of the World Council of Churches Commission on World Mission and Evangelism.  The first Catholic to be such a member was Maryknoll Sister Joan Delaney, MM, who served in Rome and Geneva during the time when Cardinal Francis George, OMI, was vicar general of our congregation (1974-86).  They became fast friends and supported each other in their ministries of evangelism and ecumenism. Sr. Joan remembers that time well: “We were long time friends from the time when he was vicar.general in Rome and I was the director of Sedos.  When I was in Geneva, he was very supportive of my work and on two occasions arranged for a delegation from the WCC to stay at the Oblate Generalate.  The group was impressed with hospitable reception they experienced.”

The third link comes from the pope stating that the WCC and the Roman Catholic Church work together on the WCC’s Office for Interreligious Dialogue and Cooperation.  Most Rev. Marcello Zago, OMI, served as secretary of the parallel Vatican office, The Pontifical Council for Interreligious Dialogue, from 1983-86. He contributed much to the cooperation between the two offices. He often reminisced about the 1986 Assisi event, that he met many non-Catholic Christians, and non-Christians, in working with the WCC as he helped Pope John Paul II issue the invitations to take part in the Assisi event.