By Carol Arnett, Originally Published by the Edwardsville Intelligencer 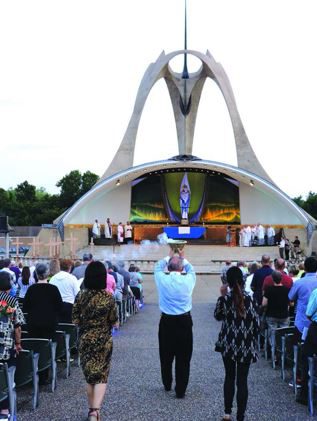 Photo: For The Intelligencer

The Novena at Our Lady of the Snows Shrine in Belleville.

Fr. Andy Knop, O.M.I., the Shrine Director, said the novena will run from July 28 to August 5. He explained the origin of the novena.

“In 352, Mary appeared to an Italian couple and predicted snow in August,” he said. “This would be very rare in Rome. Mary told the couple to build a church where the snow falls. The Pope said it was a miracle and the Basilica of Mary Major was built on the site.” August 5 is the feast day of Mary Major. The novena ends on this day.

The devotion to Our Lady of the Snows comes to the shrine through Fr. Paul Schulte, O.M.I . Schulte was a priest with the Missionary Oblates of Mary Immaculate (O.M.I.). He was known as the flying priest of the Arctic. “He was flying the Inuit people supplies,” Knop said.

An artist, J. Watson Davis, painted a picture of Schulte and his airplane. The painting shows Schulte ministering to the Inuit while Our Lady of the Snows looks over them from the sky. After his time in the Arctic, Schulte lived at St. Henry’s Seminary in Belleville and the painting was hung in the seminary chapel.

Schulte and Fr. Edwin Guild, also a Missionary Oblate of Mary Immaculate, began the novena to Our Lady of the Snows in 1943. The first outdoor novena was in 1951.

The Oblates purchased the 100 acres that would become the Shrine of Our Lady of the Snows in 1958. The Shrine is still run by the Missionary Oblates of Mary Immaculate.

“It started growing with more people coming,” Knop said. The Oblates built the grotto to Mary and then the amphitheater. “We have 200 acres here. We have 60 years at this site,” Knop said.