(In his missionary blog, Fr. Domenico RODIGHIERO tells about the ministry of one of his fellow Oblates, Fr. June Ongart KHAESER. Here are excerpts. [see www.rodighierodomenico.org])

“When I meet a handicapped person who smiles, I open my heart because I feel that life is stronger than pain, resignation and a sense of defeat.” These are the words of Father June Ongart during an informal but very stimulating conversation. …

This Missionary Oblate of Mary Immaculate has a predilection for the poor and always manages to establish with them a relationship of trust and respect. His way of serving these brothers and sisters is not at all paternalistic; on the contrary, disadvantaged people see in him a brother, one of the family who takes care of them and they do not find his way of serving them strange.

Fr. June’s field of action is large. He is the pastor of a parish in the center of Petchabun, Our Lady of Lourdes, but this commitment does not seem enough for him. He helps the nuns of a big school in that city, Saint Joseph School; but even this work, he considers almost a pastime. His interest is for the poor, for the weakest and the “periphery”, as Pope Francis calls it. … “For me,” he says, “poverty, discomfort is a great lesson. I always wonder how a handicapped, poor, abandoned person can be happy and when I sit next to them, when I listen to them, I discover their world, a world of suffering, certainly, but also a world of struggle against hopelessness and despair that makes them strong and able to win the battle over depression. The smile I see on their lips tells me that life is stronger than pain, that life makes sense even when the evidence seems to deny it. Their 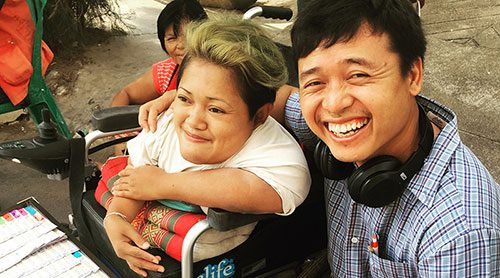 stories are a great lesson for me to help me have an experience of faith; I see God at work in their pain.”

Father June travels all day. Often he comes home late at night or he goes out after dinner because someone calls him and asks for help. His life has no rules except the rules of the poor and this makes it – he says – lively and full of surprises.

Father June is a Pakayo, a tribe of Northern Thailand. Usually, he does not speak much, but during the conversation he comes alive. He almost raises his voice and it seems that the people he talks about are there, in front of him, with all their problems and their needs and he feels that he must do something, that he must do it right away, that he cannot let more time pass because they have already waited long enough.

“When I meet the poor, the handicapped, maybe HIV-positive children, I tell myself it’s not right, it’s not their fault. I tell myself that they have done nothing wrong to deserve not being able to walk, to have to live with a disease that they did not look for and I feel like I have to do something. But then I am reassured because I see that my attention, my care for them changes them. When I see a smile on their lips, when I perceive a new hope being born in their lives, when I realize that they themselves begin to help those who are like them, then I realize that love really does miracles and I learn that basically, not only they, but each one of us, needs love, attention, recognition. I have received this love and because of this, I feel that my life has a meaning. What I want to do is to give love so that even the lives of those who are desperate might regain dignity and meaning.”

No more questions are needed now. Fr. June tells of his experiences with enthusiasm and conviction. It is precisely the little events that give substance to what is already deeply rooted in his heart. “One day I had prepared the funeral of an abandoned woman whom I had heard about and whomi I had gone to visit, because I thought she would die at any moment. I told myself it was better not to be unprepared. But then, seeing that someone was taking care of her, seeing that her life was not so insignificant and useless, she began to recover. The depression left her and now she has her own little house and she smiles again. This woman is for me a ‘living’ example of how attention to the other works miracles and I believe that my missionary duty is precisely this: to tell the poor that God loves them and thinks of them and that they are neither useless nor insignificant”.