More than 60 Oblates  concelebrated Mass on May 19, with Cardinal Chibly Langlois, Bishop of Les Cayes, presiding, to honor 75 years since the Oblates began ministry in Haiti. Another 30 diocesan priests also attended as well as 25 Oblate Associates. Oblate provincial, Fr. Ellince MARTYR, shared a brief history of Oblate presence on this island country in the Caribbean. 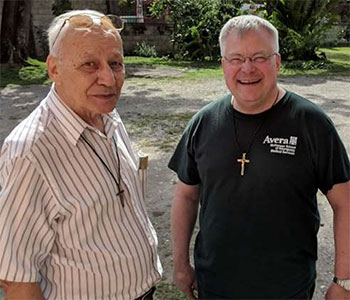 The evening before, the provincial presided at a ceremony honoring Oblate missionaries from the United States who have spent their lives of ministry in Haiti. The former Northern U.S. Province first sent Oblates to Haiti in 1943 at the request of the then Bishop of Les Cayes, on the southern tip of the island.

Oblates presently staff 24 parishes in several dioceses; they have established several primary and secondary schools, a pre-novitiate, novitiate and scholasticate.

A group of Oblate Associates, some 35 in number, have been instrumental in helping Oblates in their ministry, helping them learn the Creole language and the culture and background of the Haitian people.

The provincial gave awards to Oblates from the U.S., who together total 103 years of ministry in Haiti! 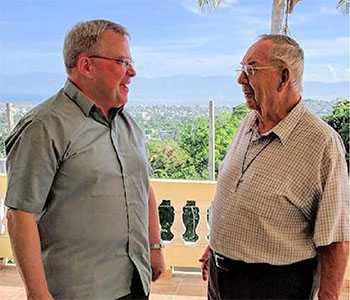 Cardinal Langolis thanked the Oblates for their many years of “generous, faithful service” and said that when the Oblates first arrived in January 1943, during World War II, priests in Les Cayes and southern Haiti were few. There was a debilitating sense of hopelessness in the Church and in society. The poor had been largely neglected by the few remaining clergy and were deprived of any government assistance.

The Oblates sent many Brothers and priests, he went on to say, and they built and staffed schools to provide quality education so the youth especially could find jobs and better themselves with an education. They built parishes among the poor and housed street kids who would otherwise likely have been killed or certainly uncared for.

“Through their schools, the Oblates found vocations to their way of life and they have been a wonderful, necessary blessing,” he said. “May they be here for many years to come!”

Today 110 Oblates minister in Haiti and they have established two missions: Colombia and French Guiana. 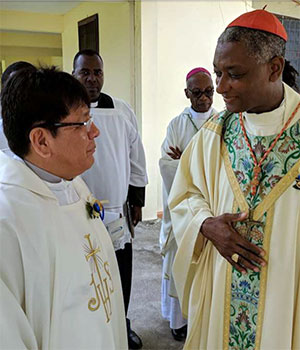 They continue to be blessed with vocations with 25 men currently in various levels of first formation. The ministry in Haiti has been financially supported by the United States Province, Notre Dame du Cap Province in Canada and the Central European Province, as well as other Oblate organizations and Catholic relief efforts and associations throughout the world.

That support has been a special blessing after the frequent hurricanes that have ravaged this poverty-stricken country. Their contributions to this Caribbean island were acknowledged and affirmed by the Haitian provincial as well, both at the Anniversary Mass and at the award ceremonies the evening before. (By Fr. Lou STUDER in OMI USA, July 2018)