Below are some “Post Card” notes and photos we’ve received from Missionary Oblates.

Fr. Nick Harding sent three photos from Peru. His descriptions are short, but the pictures speak for themselves and offer a snapshot of life there for the people in his Faith Community. 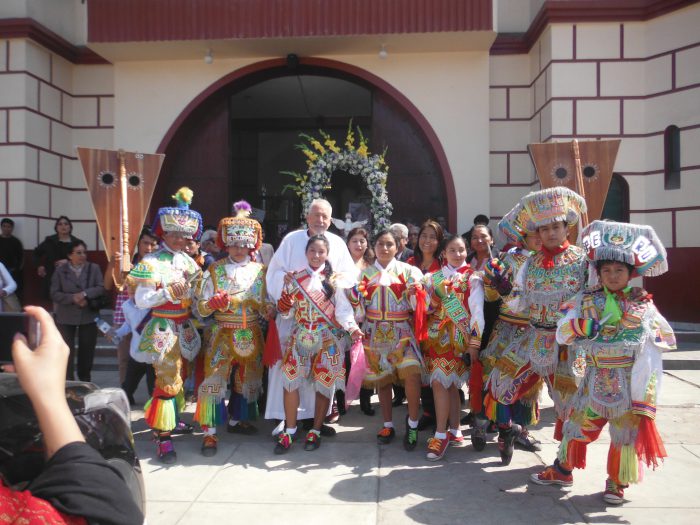 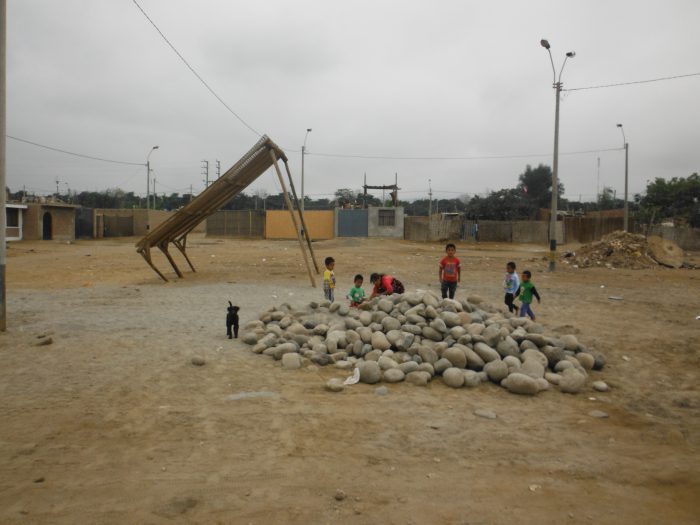 “Kids in area who use a gravel sorter for a slide” 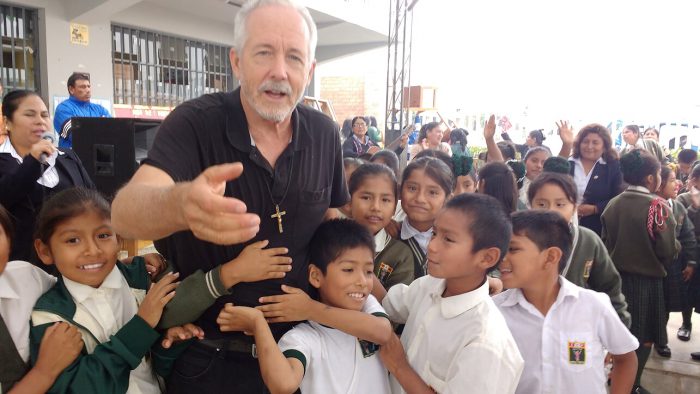 Fr. Andy Sensenig recently left his parish in Sitka, Alaska to work at the Lebh Shomea House of Prayer in Sarita, Texas. His thoughts on the move are below his photo. 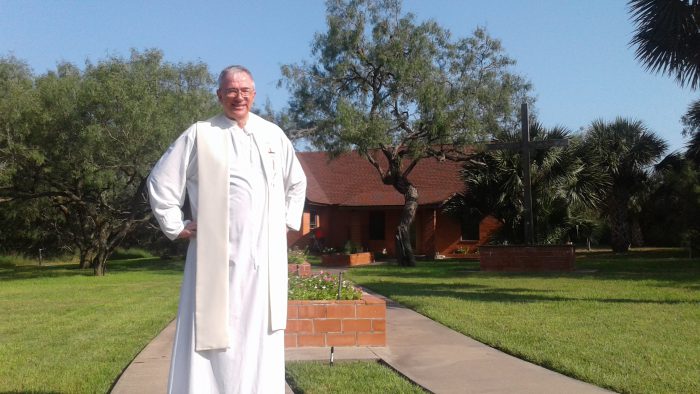 The place behind me in the photo is one of the two chapels, we have on Lebh Shomea House of Prayer in Sarita, TX.

It is called the Chapel of the Little Children.

Please know that an Oblate pointed out to me that Sarita has  a lot in common with Sitka. Both start with the letter “S” and end with an “a” with an “it” in the middle.

Yet the one thing they both have in common is plenty of good people!

Keeping everyone in prayer!

Here’s a Facebook Post with photos from the Oblate Associates of St. Joseph the Worker Shrine in Lowell, MA.  (The Shrine sets up tables for folks attending the Annual Lowell Folk Festival and invites them to “..come and rest awhile.”)

A word of thanks to the 16 folks who volunteered to assist as the Shrine participated in last weekend’s annual Lowell Folk Festival and to the “special teams” who did the heavy lifting needed to setup and take-down our sidewalk equipment. Thanks too to our underwriters who help defray the costs of our promotional give-aways: McKenna, Ouellette, D’Amato Funeral Home; Sam’s Club of Hudson, NH and Beatrice Hunt. Thanks especially to those individuals who prepared and donated some precious religious items for distribution to our visitors. Finally, thanks to Bro. Richard and Oblate Associates from near and far who assisted in welcoming our visitors. We were able to draw quite a few festival-goers to our doors – for some it was a great discovery – the first time they realized that the Shrine even existed; for others, it was a nostalgic return to a place of fond memories from yesteryear; for all, it was a great way to make our continuing presence known in this sesquicentennial anniversary year of the establishment of St. Joe’s. Also we would like to thank Fr. Gene Tremblay, OMI for all his hard work and dedication in preparing a place for festival-goers to have a rest, get some shade and have a place to enjoy all the festival food!

Here are some additional thoughts on the Festival outreach from Fr. Gene Tremblay, OMI:

The Shrine is the only Catholic entity located in the heart of the Festival grounds – each year we strive to draw to our doors some of the estimated 100,000 folks who frequent the Event.  We maintain our normal schedule of weekend Masses and confessions and keep open our welcoming air-conditioned doors throughout the Festival days for those who might seek a quiet respite – enjoying the centering sounds of Chant music and admiring the beauty of our worship space.  Quite a few took advantage of the opportunity; for some, it was a great discovery – the first time they realized that the Shrine even existed; for others, it was a nostalgic return to a place of fond memories from yesteryear; for all, it was a great way to make our continuing presence known in this 150th anniversary year of the establishment of St. Joe’s.

In addition to the array of family-style, umbrella-shaded picnic tables in the area fronting the Shrine, convenient for folks who seek a quiet place to consume the ethnic foods purchased just around the corner, we also feature a promotional tent wherein Catholic devotional items and literature are offered to folks free of charge.  The 3 most popular items selected this year were hand-made twine rosaries, small bottles of holy water (“from St. Joseph’s house to your house”) for home blessing and the Shrine’s promotional hand fans.  The “basket ‘o rosaries” containing those hand-made beads prominently signaled that they were hand-made and with a request that they be prayed with a remembrance of Robert who is battling serious health issues.  All with whom I made eye-contact at that basket promised that they would indeed pray for him.

On the whole, the Festival was a huge success and the Shrine’s participation, once again this year was an outreach well worth the effort. 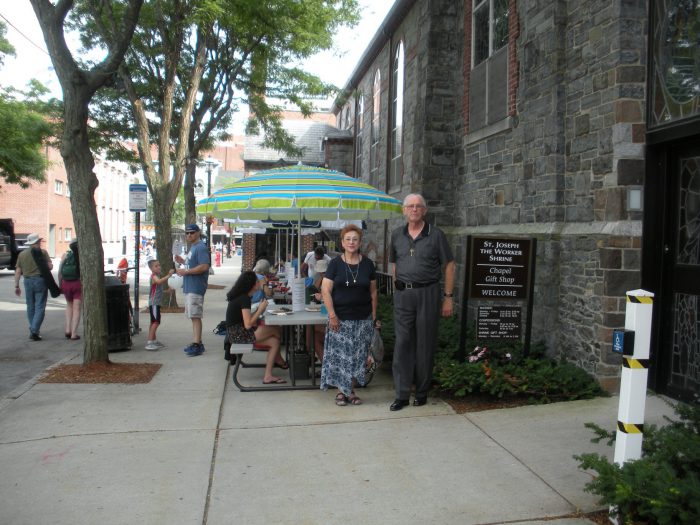 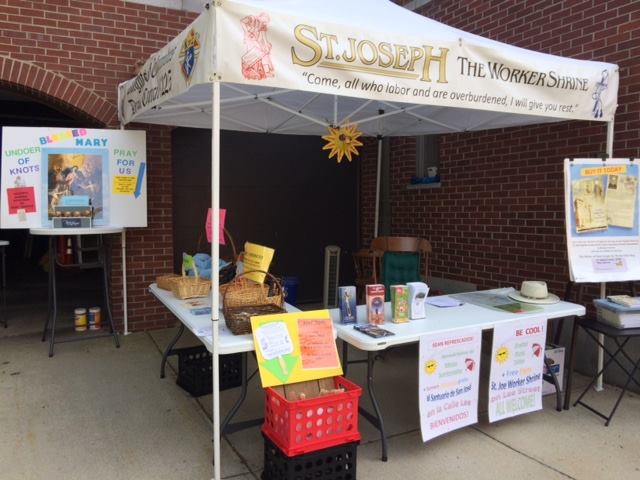 `Information about Shrine programs is available to the visitors 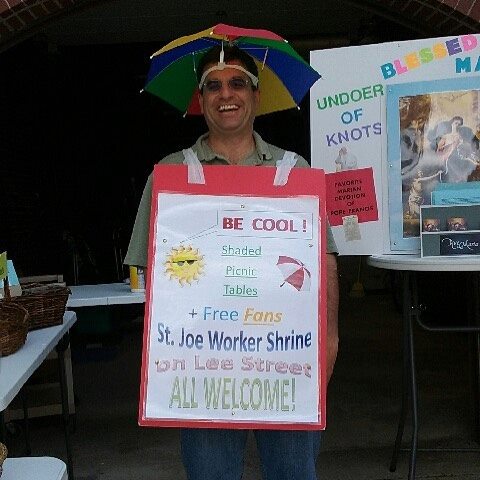