Text and Photos By Christine Corbett Conklin , This feature is being shared with the permission of Yakima Magazine and the Yakima Herald-Republic 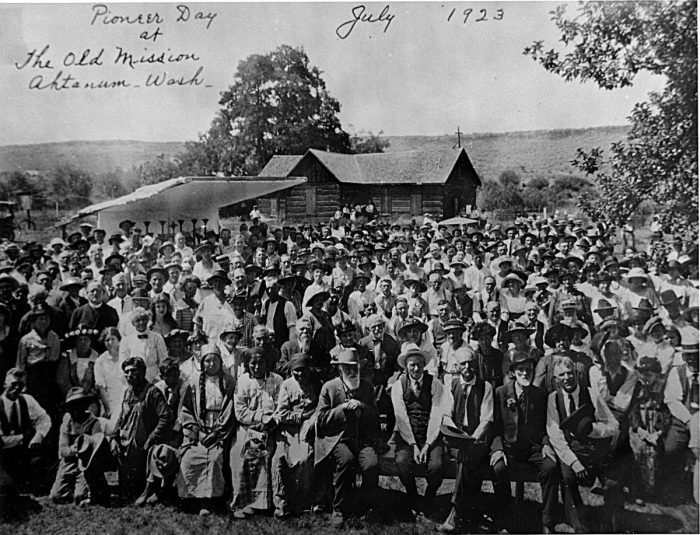 Photo taken at “Pioneer Day” in 1923. Courtesy of the Yakima Valley Museum

In the gentle breeze and the chirping of birds, there is a sense of timelessness at the St. Joseph Mission at the Ahtanum located beside Bachelor Creek. In this park-like setting with cottonwoods, evergreens and apple trees planted in the mid-1800s, the whispers of history are all around.

At any moment, you can almost expect to see Father Louis Napoleon St. Onge, a founding “black robe” of the Mission, come walking out the door of the rustic log chapel. Or perhaps Chief Kamiakin bringing vegetables to this French Oblate priest who, in 1869, headed construction of the chapel at this site, about 12 miles southwest of the City of Yakima.

The serene setting is an important part of Northwest history, the site where Oblates of Mary Immaculate and Yakama Indians, including Chief Kamiakin, worked side by side to make irrigation canals and raise crops. The Oblates had been invited to come by Chief Kamiakin. He sought to learn and teach his people about the Catholic Faith, donating land to establish the Mission. The site was named to the National Register of Historic Places in 1976.

Today, the Ahtanum Mission, as it’s known, encompasses about 12 acres, with the Diocese of Yakima still owning some 165 acres of the original 200-acre property. The setting is open for reunions, picnics, weddings and receptions, with a picnic shelter, tables and RV site. A playground includes swings, a slide, baseball field with backstop, horseshoe pits and a volleyball net.

Those interested in history also can see numerous monuments to the heritage of the mission. The major showpiece is the 16 x 24-foot chapel of hand-hewn logs with dovetailed joints, constructed in the shape of a cross. This is a replacement for the original chapel, initially called Holy Cross Mission – or Saint-Croix d’Ahtanum — which was burned in 1855 by soldiers who discovered a buried keg of gunpowder on the grounds and suspected that the priests had been providing gunpowder to the Indians, according to historical accounts.