Ashgabat, Turkmenistan (Agenzia Fides) – “There is a category of non-believers who ask themselves questions about their own existence after contact with poetic language, because poetry raises questions that mathematics and physics do not. A lady once told me that she had decided to receive baptism after reading a collection of my poems. From this, I understand that being a priest-poet is useful.  Poetry is for me a silent testimony of the love of God”. This is what Fides reports about Fr. Andrzej Madej, Polish priest of the Oblates of Mary Immaculate (OMI) and Superior of the Mission of Turkmenistan on the eve of the publication of his latest collection in Polish, “Pod skrzydlem aniola” (“Under the Wing of the Angel”) . 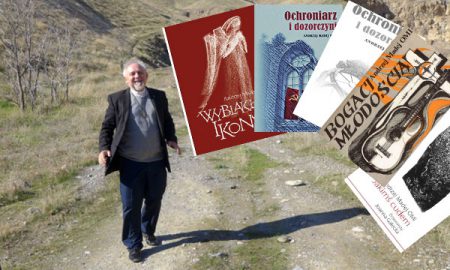 The Oblate also explains to Fides: “I have been writing poetry for almost 50 years and in many moments of my life, the Lord has shown me that I should continue. When I was a seminarian in Rome in the early seventies, the superior of the Oblates of Mary Immaculate, a great theologian, often used poetic language in his homilies and catechesis. It was there that I learned that symbolism is a great tool for preaching. I am a priest who uses poetry to be even more strongly and deeply a priest “.

Fr. Madej’s compositions are written in Polish, but often translated into Russian.  This makes them available to the faithful of Turkmenistan: “My mission is to be among the people, for this reason I do not have time to translate the poems. But some of the faithful who speak Russian, ask me for updates on the latest texts”, he says.

The Oblate has been serving in Turkmenistan since 1997, when John Paul II established the Missio sui iuris with which the local Catholic church was reborn. For thirteen years, the presence of the Oblates was tolerated only as representatives of the Vatican Embassy.   At first they met in private homes and Mass was celebrated in the diplomatic territory of the Apostolic Nunciature of Ashgabat. In 2010 the Turkmen government officially recognized the Catholic presence. The Turkmen Catholic community, consisting of about two hundred faithful, meets in the chapel of the Transfiguration of the Lord, in the capital Ashgabat, and is led by two Oblates. Turkmenistan has 5 million inhabitants of whom 90% are Muslim. (LF) (Agenzia Fides 11/8/2018)