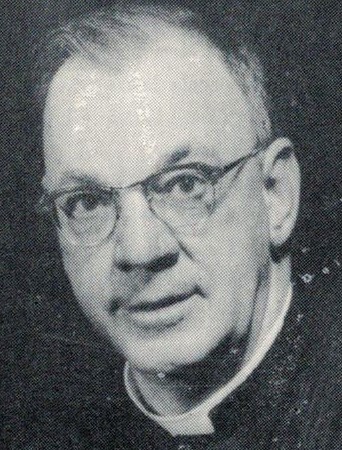 Father Paul R. Rust, OMI (1906-87) spent much of his life examining the Episcopalian Church.  His books, The First of the Puritans and the Book of Common Prayer (1949) and Fallible Fallacies (1955) reflect his admiration for the Episcopalian Book of Common Prayer, and his conviction that Anglican Orders were null and void (Pope Leo XIII established this with his encyclical letter of 1896).

However, the August statement by the Anglican-Roman Catholic International Commission (ARCIC III) “Walking Together on the Way,” shows how much we have changed since Paul’s books and the earlier statement by Pope Leo.  Yet “Walking Together” reflects and incorporates some of the hesitations of both Paul and the pope. Note that in the USA, the world wide Anglican Church is called Episcopal.

“Walking Together” is long, 59 pages of text consisting of 161 numbered paragraphs, with another 27 pages of Introduction, list of Anglican and Roman Catholic signers, and bibliography:  click here to see the entire document. Those with some back ground in theology will find the entire document a remarkable summary of much of our Catholic and Episcopalian theology of the Church, of Baptism and the Eucharist, and of our joint history.

For those who want to taste a shorter version of this brilliant statement, I recommend the 2 page Preface (pp. iv-v) and the Conclusion (pp. 56-59).

For both groups, please note the following.  First, this statement bonds Ecumenism and Mission.  Some ecumenists today neglect the fact that Ecumenism arose in the challenge of many Christian Churches competing as missionary Churches. Mission and Unity are the two sides of one coin (especially #’s 48-49, 55, 75,104,106,154).

Secondly, “Walking Together” admits very frankly that the early hopefulness of better relations between our two Churches has been dashed.  Ordination of women as priests and bishops by many Anglican Churches, the shift towards gay marriage by some Anglican Churches has caused many difficulties (#’s 77-78). It has been about 12 years since this consultation produced a statement. When “Walking Together” was finished in 2017, it took until this August before it was published.  There has been very little publicity about it, partly because its new approach needs some time to digest.

Thirdly, the statement proposes a new and startling way to proceed when difficulties arise. Both Churches admit that each has something the other needs. Being receptive to qualities which the other has, can help us walk together. On the Roman Catholic side, the role of the papacy and synod of bishops heads the list (#’s 42, 76). On the Episcopalian side, the place of the laity in the leadership of the Church (#’s 54, 81,148,156). So “mutual receptive learning” is explained.

The Episcopalian and Catholic signers of the statement do view themselves as continuing the reform of the Church begun by Martin Luther:  Preface, p. v.  For much more on this, see the USA Oblate website Mission-Unity-Dialogue, home page, www.harrywinter.org.

I suspect Paul Rust would appreciate the frankness and creativity of this statement.  I think he would also notice that “mutual receptive learning” is a wonderful method for solving difficulties within the Oblates of Mary Immaculate, and any community.