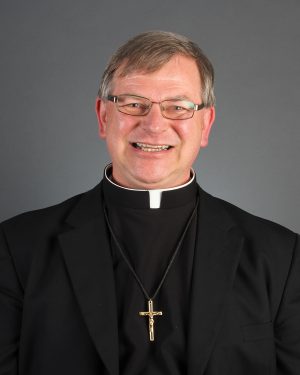 By: Dominique Johnson, Originally Published by The Inside Passage

Growing up in Cornwall-on-Hudson, New York, Fr. Dwight Hoeberechts, OMI never envisioned that one day he would become a priest. His first aspiration was to become a commercial airline pilot.

When he was 16 years old Fr. Dwight received his first flying lesson as a Christmas gift from his parents and a passion for flying grew from there. While in high school he shared that he was known for two things, “Youngest member of my class and the only one who could fly an airplane by himself.”

After graduation Fr. Dwight worked to gain more flying experience, while taking college courses for a degree in Business Administration. His dream of becoming a pilot came to a halt at the age of 18 when his “eyes changed” and he had to start wearing glasses. A friend, who was an airline pilot with American Airlines told him that wearing glasses would disqualify him from becoming a commercial pilot.

“I gave up (on flying) at that point,” Fr. Dwight said and changed career paths all together and went into nursing. He received an associate degree in nursing and became a registered nurse in the state of New York. For two years he worked as a spinal cord injury rehab nurse at a Veteran’s Hospital.

However, there became a need for commercial airline pilots and Fr. Dwight saw it as a chance to achieve his dream. So, he left his job as a nurse at the VA and moved to Florida to begin flight school. He received his commercial license instrument rating and began working on an instructors rating. He moved back to New York to continue his instruction, but at his six-month medical exam his eye prescription had changed again. “I talked with my flight doctor and he said I could pass for a while, but one day it wouldn’t work,” he said.

Again Fr. Dwight decided to end his pursuit of becoming a commercial pilot and went back into nursing as the charge nurse of the emergency room in his hometown. It was during slow nights working in the ER that he began to discern his vocation, “I had time to pray and that’s when I started asking God what do you want me to do.” He considered lay missionary work as a pilot or nurse and he considered becoming an Oblate brother.

Fr. Dwight doesn’t recall anyone asking him about becoming a priest while he was growing up or as a young adult, but after spending time in prayer he decided to talk with the vocations director for the Missionary Oblates of Mary Immaculate and decided to enter formation. When he told the head nurse, a parishioner at his local parish, that he has resigning from his position she responded, “I knew you weren’t going to be with us forever, and I was going to ask you if you had ever thought about becoming a priest.”

Click here to see the rest of the article