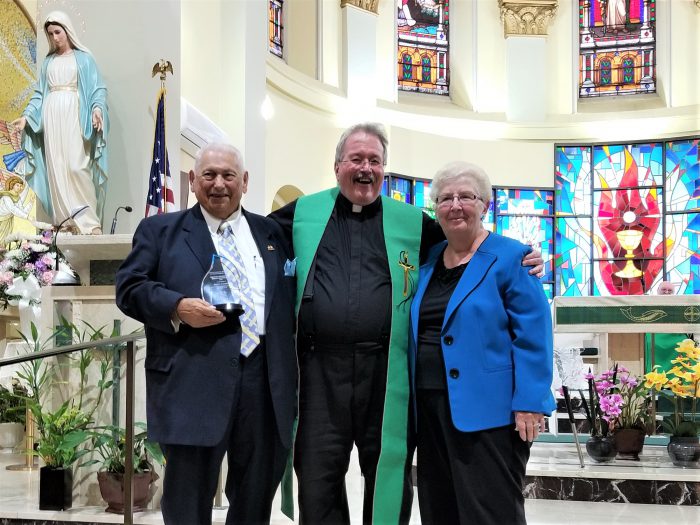 (Editor’s Note: The St. Joseph the Worker Award is a “Christian Worker Award” given annually by the Shrine to an individual or individuals who demonstrate Christian values in the workplace.)

Albert is the devoted husband of Thérèse – this coming year they will be celebrating their 60th wedding anniversary.  Al is the loving father of 7 children and the doting grandfather to 11 grandchildren.  He is a daily communicant who has made the Shrine his weekday church home – he extends himself in service of his fellow-worshipers here by serving as lector, server, and usher, as needs arise.

For 60 years, Al has been a successful and conscientious businessman and Notary Public headquartered in Dracut.  He is a respected Certified Public Accountant who combines an Insurance Agency and a Real Estate Brokerage among the array of services offered to the public – to prevent these ledger-keeping tasks from dulling the spirit, Al also maintains a commercial garden center adjacent to his offices.  He makes time to smell the roses!

In his younger and formative years, Al graduated from Keith Academy and Bentley College; he served his country in the National Guard for 9 years.  His civic engagements over the years have included the Dracut Rotary Club, the Lafayette Club and the Friends of D’Youville.  He served as Grand Knight of the Dracut Knights of Columbus and has been a driving force animating the Franco-American Day Committee – he was named the 1982 Franco American Man of the Year by that same organization.

In his spare time over the years he engaged in even more outreach into the community, he volunteered to serve as Treasurer of the Acre Model Neighborhood Organization; got involved with the St. Jean Baptiste Preservation Committee and served on the St. Joseph Elementary School board and its VIP 1,000 Club.

This multi-talented and civically involved man even acceded to the role of a super-sleuth at one point (this is the stuff of legend in these parts); when an iconic and long-revered statue of St. Jean Baptiste (the patron of French Canadians) mysteriously disappeared from its eponymous church building during a major transition, Al was the one to connect all the dots; he successfully retrieved it and restored it to an honored place in the French Canadian community of Lowell.

Kudos to this generous man of faith for his model involvement and living of Gospel values.