By Mike Viola with Mark Hernández

Mark Anthony Hernández was making a name for himself in the investment banking field.  He had a good job, and a nice paycheck. He had been selected for an exclusive program dedicated to training future leaders in the banking industry. This training would prove to open a door towards his dream job. His mentor at the time even told him when he was selected for the position in investment banking, “You may not understand fully now, but the stars have aligned in such a way to make this possible. Many of us here are working in the minor leagues of banking, but you are going to the major leagues of banking”. At this time Mark did everything in his power to dress the part, talk the part, and took great pride in this effort. 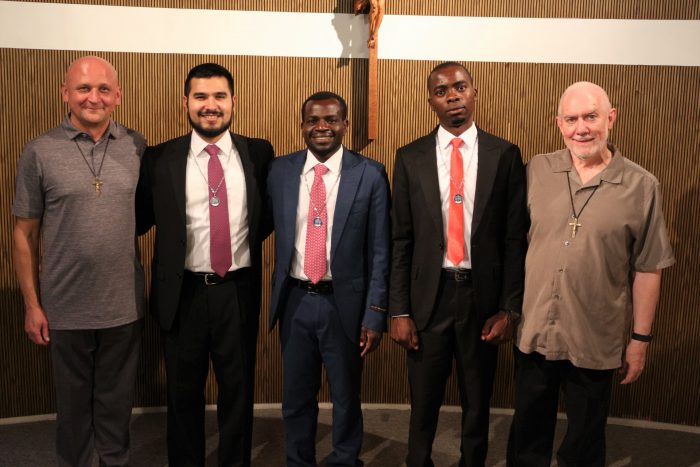 Six months into this new position, Mark began to realize the investment that really mattered was not in his career, it was an investment in living the gospel.  One night while in the comfort of his luxury apartment suite, he acknowledged he was becoming a workaholic. His eyes had been open to this reality by his family. He asked God that night, “God this is the work I believe you are calling me to do, yet perhaps I am blinded by my own desires to grow successful, rich, and highly esteemed in society. How can it be that it feels like I am burying my true talents? Please give me a sign that this is not the place to where you are calling me to give my life”. Shortly after this plea with God, Mark was inspired to open his Bible. He opened the Bible to Haggai Chapter 1. He remembers the words as if it were yesterday that he read them. “In the second year, in the sixth month, God spoke to his people”. Mark recalls pausing here as he was in the second year of his banking career, and he had held this new position for six months. He told God, “Lord whatever it is you want to speak next, allow it to really touch me, please let it speak Truth”. As he continued reading he was touched by the words, “You have worked long hours, yet you have borne little fruit. You have attempted to carry your money bag home, but it is filled with holes. Your house is well built, while my house lies in ruins. Reflect on your experiences; you have told yourself that the time has not yet come to help rebuild the house of the Lord, but I tell you the time is now”. These words struck Mark like a lightning bolt. He broke down in tears at the realization that his true calling was not in the field of banking. He knew deep in his heart that these words spoke Truth. In this experience a seed was planted within Mark’s heart. A seed that would push Mark to invest his time, energies, and entire life to help rebuild God’s Church and to bring the talents God has given him to the service of God’s people. Soon after this experience, Mark took a giant leap of faith; he resigned from his comfortable job in order to deepen in his relationship with God.

Born and raised in Texas, Mark has been part of the Oblate family since an early age.  He received his first few Sacraments in an Oblate parish in Eagle Pass, Texas. In a family recording of Mark’s First Communion, Oblate Fr. Richard Guerra teased Mark on how serious he was during the Mass; maybe too serious. Fr. Guerra tried to get him to smile after the Mass was over and photos were being taken. Even though at first Mark was reluctant to smile, Fr. Guerra finally managed to get Mark to smile with his unique sense of humor.

Mark grew up in a family of migrant workers.  His grandparents and parents would travel from Texas to Wisconsin and Montana during the summer months to work in the fields as laborers.  His mother became a high school teacher for people with special needs and his father became an Assistant Supervisor for the Texas Department of Transportation. When Mark reflects on the sacrifices and struggles his parents have had to make in order to open many doors for him and his two brothers, he is filled with admiration and gratitude. 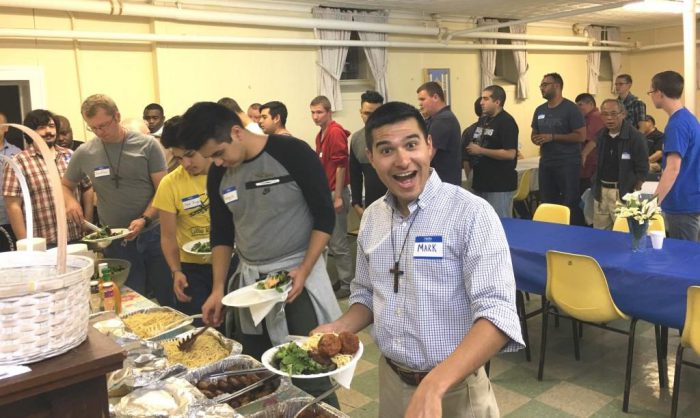 During Mark’s time at Texas A&M he encountered many Oblates. These Oblates left lasting impressions on Mark as they gave him advice, encouraged him, and walked with him on his journey. The Oblates Mark encountered during this critical time in his spiritual journey were Fr. Jim Loiacono, Fr. Francis Kelly Nemeck, Fr. Charlie Banks, and Fr. Roberto Peña. During his transition from banking to exploring religious life, Mark remembered these relationships and was reminded that his roots in the Oblate family go deep and are part of his life story. Fr. Peña, who has now just turned 95 years old, was deeply influential to Mark. The role he played in Mark’s life, was the role of a grandfather. Mark’s grandfather’s past away before he was born, and he always longed for a grandfather. During his time in college Mark’s mother would invite Fr. Peña to Eagle Pass to come celebrate his oldest brother’s birthday with them. It became a consistent ritual for Mark to stop for Fr. Peña at the Madonna House during his Christmas break from school and drive 3 hours together to his hometown. Fr. Peña would stay with his family, as they already had a room prepared for him in their home. These car rides and family visits brought Mark to see the humanness of an Oblate priest. He saw Fr. Peña as a man of joy, a man of certitude, and a person that spoke out on behalf of the voiceless.

These experiences brought Mark to the realization that God had been sending him gifted and talented spiritual companions on his journey. Although reluctant at first to consider the Oblates as a potential spiritual family. It was God that opened his eyes to see that it was not him that would choose his spiritual community, but it was God that had been weaving his story alongside the stories of influential Oblates.

Mark has since finished the pre-novitiate program and is currently discerning his calling at the Oblate novitiate in Godfrey, Illinois.  He is part of an international novitiate community. Mark said he has seen his relationships with others grow and evolve since pursuing his desire to live the Gospel. He is encouraged by his experiences. Even though he still finds himself serious when learning about God and the faith, Mark is overjoyed at the invitation to follow Christ and no longer needs to think twice about smiling when striving to show others the love of Christ, and the love God has shown Mark.