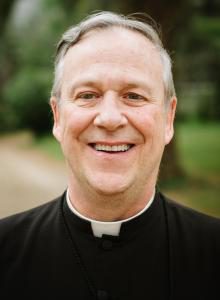 Fr. General’s letter to the Congregation on the 200th anniversary of the first Rule

During the months of September and October, we recall Eugene de Mazenod at his family’s chateau, Saint Laurent du Verdon, writing the first Rule for the Missionaries of Provence.  From October 23 to November 1, Eugene preached a retreat on each of the articles of the Rule, and it was approved by the members of the First General Chapter.  We remember with some ironic humour how he called the scholastics to vote so that his project of religious life would be approved at that Chapter!

On All Saints Day, 1818, the Missionaries of Provence made their first oblation of chastity, obedience and perseverance before the Blessed Sacrament.  It was too radical at this point to include poverty, and this vow would only be introduced at the Second General Chapter, in 1821.  In the Rule, Eugene envisioned missionaries who were to live in an apostolic community, who were to share a life of virtue, prayer and study of the Word of God, and who would preach the Gospel to the poor and most abandoned.

First of all, the Founder wanted this group of missionaries to continue the heritage of holiness and apostolic labours of the great Orders that had been suppressed by the French Revolution and its aftermath.  He understood that the vows, living together in apostolic community, and the pursuit of a holy life were essential for the effectiveness of the mission.  In his mind, these were not mere add-ons or optional niceties to a missionary life, but integral to the call to preach the Gospel to the poor and most abandoned.  Although the number of missionaries was small at our beginning, Eugene’s vision was in no way small or timid, but anticipated taking up and continuing the work and holiness of the Jesuits, the Franciscans, the Redemptorists, etc.!

Secondly, the Rule was written to express a particular spirit characteristic of the Missionaries and to bind them together for a common mission.  The vision, the sense of vocation, the encounter with the mystery of God’s love on a Good Friday impelled Eugene to form a community with the mission of announcing God’s love and mercy to the poor and most abandoned.  Eugene sought to express this spirit in the Rule, which would sustain a common vision and preserve the unity of the small group of missionaries as it crossed its first borders, moving out of the diocese of Aix and into the diocese of Digne.

Responding to the urgent needs of each era, the Rule has evolved and changed through the lived experience of Oblates all over the world and through the communal discernment of successive General Chapters.

I have received a proposal from Brother Benoit Dosquet of the Aix community and from the General Committee of Oblate Brothers, which I invite you to support.  To commemorate the 200th anniversary of the first Rule throughout the Congregation, I am asking all our communities to organize a retreat day with a time for adoration.  While November 1st is the actual anniversary, in light of pastoral needs we could commemorate this significant date on October 30th or 31st as well.  Where possible, an entire day of continuous adoration could take place in Oblate communities and ministries, inviting our collaborators in mission, lay associates and all those connected to the Oblate charism to join with us in prayer.

During this time of adoration, I invite us to renew our vows in the presence of the Lord and with the fervour of Saint Eugene.  Let us do this in communion with all our Saints and Blessed Oblates, and in communion with all the Oblates who have gone before us. United with our entire family in heaven and on earth, we will celebrate the solemnity of All Saints and the commemoration of our Faithful Departed as a time of special communion in charity. We can also do this in light of the present situation of crisis in the Church, spending extra time in prayer for Pope Francis, for our Congregation and the entire Church.

Please contact Fr. Shanil Jayawardena at the OMI Communications Office, shaniljomi@gmail.com and notify him of the day and time that your community will have its adoration/day of retreat.  We will post this on the OMI website and experience a sense of global communion during these days.   Already, I thank you for responding so fully to this request!