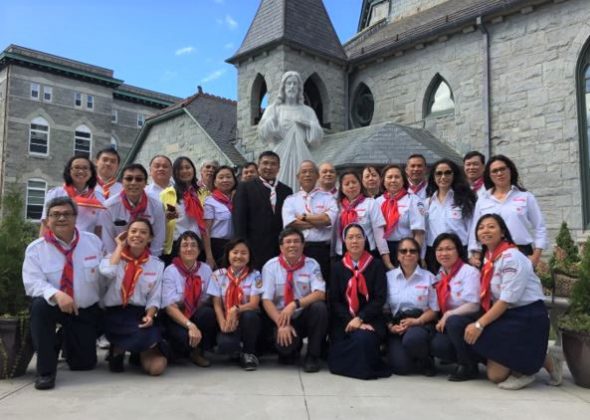 Fr. Pham is standing in the center of this photo with his youth group

The most difficult time of Oblate Fr. Tuan Pham’s life was also the most inspirational.  It was when he was one of the “boat people,” escaping the turmoil of Vietnam.  He spent more than ten days on the open sea, not knowing if he would live, die or where he would end up.

“In a strange way, I felt like I was reborn out there on the ocean.  It was at that time I really started to think about becoming a priest,” said Fr. Pham.

Father Pham was born in 1955 in Vietnam.  Even after the Vietnam War ended in 1975, there was a lot of conflict in the country.  Adding complications for the Pham family was that their father had worked for the previous government, making him a target of the new Communist regime.

In 1983 Fr. Pham decided it would be best for him to flee the country.  He left his family and friends behind and escaped with other refugees on a boat.  It took almost two weeks for the boat to reach Hong Kong.  Father Pham then spent more than two years as a refugee before being allowed to immigrate to Canada in.

In Canada Fr. Pham followed through on his desire to become a priest. In 1991, he entered St. Peter’s Seminary in London, Ontario. In 1996, he joined the Missionary Oblates because he wanted to be a missionary to a far off place like South America or Africa.  But then he realized that being a missionary doesn’t mean having to travel far away.

“A missionary is not necessarily someone who goes out to another country to work,” said Fr. Pham.  “You can be a missionary right here at home.”

Father Pham was ordained in 2002 and ministered in Canada several years, including with the Vietnamese population.  Then he received his “missionary” assignment.  But it was not to a far away country.  It was to the United States. 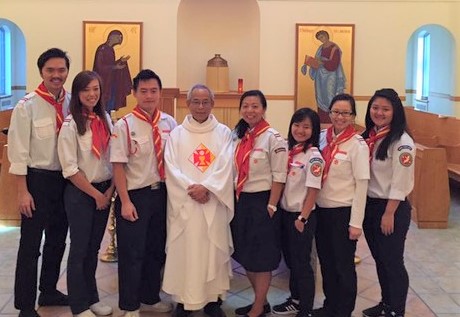 Fr. Pham and members of the Vietnamese Eucharistic Youth Movement

One of his American assignments was ministering for six years at St. Patrick Church in Lowell, Massachusetts.  Saint Patrick’s is a multicultural parish, with Sunday Masses being held in five different languages.  Father Pham was responsible for the Masses in Vietnamese and Burmese.

Children and teenagers often read as lectors at the Vietnamese Masses.  This was a way to bring generations together as the young people had to work with their parents or grandparents in practicing how to read in Vietnamese.

Today Fr. Pham wears many hats in his missionary activities.  He is a Vocation Director for the Oblates covering the northeastern part of the United States.  He is also often on the road preaching missions for Vietnamese communities in the U.S. and Canada.

In 2016 Fr. Pham began serving as an area chaplain for the northeast chapter of the Vietnamese Eucharistic Youth Movement (VEYM).  Specific to the Vietnamese community, VEYM aims to teach youth ages 7-17 to become better individuals as well as excellent Christians.    There are 14 chapters of the VEYM in the northeast including Massachusetts, New Hampshire, New York, Connecticut and New Jersey.

About every two years, Fr. Pham returns to Vietnam to visit his two families: his biological family and his Oblate family.  Father Pham has been instrumental in getting the Oblates’ Vietnam mission up and running effectively.

“Things have really started to grow at our missions in Vietnam in recent years,” said Fr. Pham.  “It’s something that brings great pride to me and the Oblates.”

The Oblates in Vietnam

The Missionary Oblates were allowed by the Communist government to enter Vietnam in 2000 to perform limited missionary work.  The Oblates are one of just a handful of religious congregations given permission to work in the country.

There are currently 19 Oblate priests and three brothers working in Vietnam.  Much of their work is pastoral in nature, but they also have outreach programs including overseeing the Bung Orphanage.

A source of great pride for members of the Vietnam mission is that there are 53 Oblate seminarians currently in the country discerning a calling to religious life.  This is the largest number of Oblate seminarians in any country in Asia.

The Oblates in Vietnam are currently taking part in a Year of Vocations.  They kicked off the year with a special Mass in January that was attended by more than 150 Oblates.  Bishop Joseph Nguyen Tan Tuoc presided at the Mass.

“I pray that every Oblate is aware of his belonging to God, that he obeys God’s Will completely within the charism of the Oblate founder, St. Eugene De Mazenod,” said Bp. Joseph.  “In this way, the Oblates will continue to bring the Good News to the poor and most abandoned in Vietnam for many years to come.”