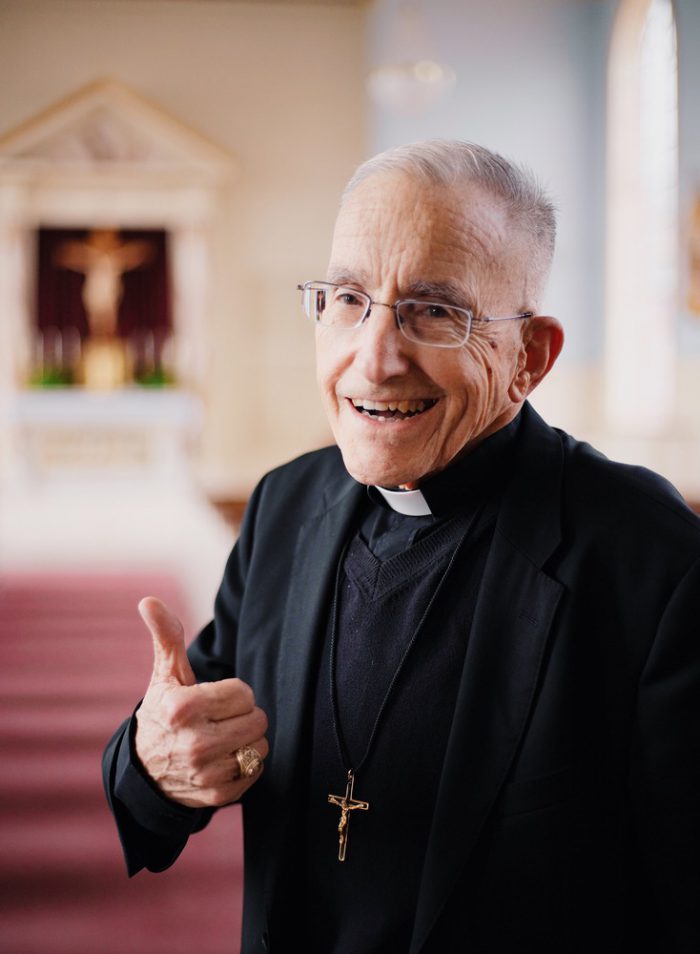 A young man, who wishes to remain unnamed, had a problem. He was joining a religious order, entering the seminary, and taking a vow of poverty. As a former student of Texas A&M University, his Aggie class ring was a treasured possession, and he could not take it with him. After praying, the Holy Spirit offered the perfect solution. He gave the ring to his spiritual mentor at St. Mary Catholic Center, Missionary Oblate of Mary Immaculate Father Charlie Banks.

Age 79, Father Banks is the superior of the Oblate Madonna Residence in San Antonio, a retirement community that includes 23 priests, one brother and one bishop. Since 2007, he has made the more than three-hour trip to College Station to spend Mondays at the Catholic Center. There, he offers spiritual direction to students and others who seek his kind and wise counsel. Midafternoon, Father Banks moves to the confessional for two hours, where a long line waits to receive the sacrament. Then, he celebrates Mass, attended by hundreds; he drives back to San Antonio on Tuesday.

The students love Father Banks, and Father Banks loves the students, who give him great hope for the future of the Catholic Church. He admires these young adults, who strive to live their faith in a world that constantly challenges it.

“It is an honor and inspiration to go to St. Mary’s every week,” Father Banks said. He also praised the dedication of the priests, Apostles of the Interior Life Sisters, and the lay staff who serve there.When the former student offered him the Aggie ring, Father Banks was surprised and touched. He knew that students cherish their rings as a symbol of their membership in the larger community of Aggies. They continue to wear them long after college, often throughout their lives. All over the world, the ring identifies Aggies to each other. Symbols on the ring represent the values of Texas A&M University and scholastic achievement. Five stars signify the phases of Aggie development: mind or intellect; body; spiritual attainment; emotional poise; and integrity of character.

Because the ring has a solemn meaning for Aggies, Father Banks wondered if he could rightfully wear it without offending those who honor its tradition. He asked a friend, Joe Franklin, Class of 76, to find out. Franklin contacted Texas A&M’s Association of Former Students and explained the circumstances. The Association gave their blessing for Father Banks to wear the ring.

Franklin said if any one exemplifies the values that Aggies hold dear, values also reflected in Catholicism, it is Father Banks.