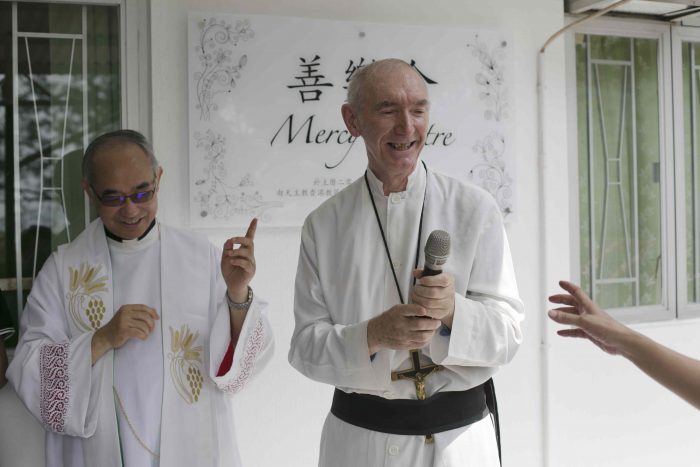 Fr. Wotherspoon is on the right

A 72-year-old Oblate priest in Hong Kong is battling some of the most powerful drug lords in the world – and he’s winning.

Father John Wotherspoon, O.M.I. is leading a campaign to reduce drug trafficking in Hong Kong.  Since 2013, hundreds of drug mules (drug couriers) have been stopped from reaching Hong Kong thanks to the efforts of Fr. Wotherspoon.

“The more people know the risks of being a mule, and understanding that this tempting path can lead to a terrible and painful fate, the more people and their families will not suffer the ravages of drug trafficking,” said Fr. Wotherspoon.

The “No More Mules” campaign that Fr. Wotherspoon started is proving that the pen is mightier than the sword.  The campaign consists of former drug mules writing letters back home warning others not to follow their example.  The letters are also shared on Facebook (no mas mulas – no more mules), along with several websites and social media platforms.

The letters that Fr. John receives are heartbreaking.  A man from Colombia, who was caught with a package of drugs he was carrying through the Hong Kong train station, recently wrote to Fr. John:

“I first want to congratulate you father on a job well done.  I’ve heard a lot about you and your anti-drug campaign.  I would very much like to join.  I was ignorant and greedy, and I thought this was a quick way to make money.  Now I am in jail.  I am suffering and my family is suffering back home.  I can no longer support my wife and our two children.  Everything is gone.  I want to share my story with other people so they will not fall victim to something like this.”

Father John began his anti-drug trafficking campaign while working as a prison chaplain in Hong Kong.  He met several smugglers from Africa and South America who shared that they had become drug mules to support their families.

A mule can be paid thousands of dollars to smuggle drugs into Hong Kong.  In one trip, they can make the equivalent of several years of wages.  The mules smuggle drugs in their luggage, clothing and sometimes even by swallowing plastic-wrapped drugs.

While talking with a drug mule from Tanzania, Fr. John convinced the man to write a letter home warning people not to follow in his footsteps.  The “No More Mules” campaign was born.

Father John was not a likely person to take on international drug traffickers.  Originally from Australia, he arrived in Hong Kong in 1985.  Most of his ministry as an Oblate priest had focused on parish work and teaching high school students.  Now, he was teaching the people of Hong Kong about the plight of drug mules.

Father John estimates that the campaign stops at least one drug mule from entering Hong Kong every week.  In addition to his drug trafficking awareness campaign, he also works with government officials and judges in Hong Kong to get the laws regarding the sentencing of mules changed.  In many cases, the mules receive a harsher prison sentence than the drug traffickers that hired them.

In the past few years Fr. John has taken his “No More Mules” campaign on the road.  He traveled to Africa three times and preached awareness of drug trafficking in Tanzania, Kenya, Uganda, South Africa, Lesotho and Zambia.  Earlier this year he was in Latin America bringing his message to Mexico, Colombia, Venezuela, Suriname, Peru, Bolivia, Paraguay, Argentina and Brazil.  In Latin America he also met with many of the family members of the drug mules he counseled in prison in Hong Kong, setting up support groups among them and engaging their help in the anti-drug campaign.

During his overseas trips, Fr. John had many media meetings to get his message printed or broadcast.  He will even confront drug traffickers at great personal risk, including this encounter he wrote about on his blog after visiting a mall in Sao Paolo, Brazil where drug mules are recruited:

“I went to a place where the Nigerians hang out who have sent so many drug mules to Hong Kong and other places.  I checked the possibility of someone from the police or media accompanying me but that was not possible or practical.  So I went by myself.” I had my Cross on, identified myself and was taken by a ‘lookout’ to a café where the group of men hangs out.  When I started showing them pictures of drug lords in my files, they recognized some.  My lookout advised me to leave before there was trouble, and took me to a different location where he lectured me – ‘if you don’t want to lose your passport and your money, if you don’t want to be penniless and begging on the streets here, you go back to your own country and pray for the world.

“Maybe my action that day was crazy, but I have a feeling that it may have caused a reduction in the number of poor people from that part of world going to prison in Hong Kong.”

While his ministry may be a little bit crazy, people in Hong Kong are taking notice of the missionary priest who won’t back down from the drug lords.  In 2017 Fr. John was honored with a Spirit of Hong Kong Award in which he was voted the people’s choice award winner through on-line voting.

But the awards and personal recognition are not what matters to Fr. John.  It’s the stack of letters on his desk that he cherishes the most.  In one of those letters, a Colombian drug mule in a Hong Kong jail wrote to Fr John: “First of all, God bless you and your campaign.  It is a wonderful opportunity at redemption for me and a second chance at doing the right thing.  I may be in jail, but I have faith that everything is going to change with the help of God.  Please write back soon… and God bless you.”

A Letter From A Drug Mule

My life in Brazil had become very stressful and difficult in recent years.  Most of my life was caring for my father who suffers from a chronic and advanced lung disease, now in its terminal stage.  He is in a debilitating condition, bedridden and connected 24 hours to tubes and equipment to help him breath.

I found myself not only being my father’s main caregiver but I was also the main provider for the household expenses, including buying food, paying the rent, helping with my father’s medical expenses as well as my own living expenses.  Despite the fact that I hold two university degrees, I could not find employment to sufficiently provide for my family.  I got into debt.  All I could think of was paying my debts and affording my father some comfort at the end of his life.

At this time I met a man who had traveled abroad carrying drugs, doing what is known as a mule job.  Through telephone communication he introduced me to people who offered me $4,000 (U.S.) to do the same.  I felt like it was the solution for my difficulties and I accepted it, much to my regret today.

It has been more than nine months since my arrest at the Hong Kong airport.  I have created great suffering for myself and brought extreme burdens to my already financially and emotionally stressed out family.  Not the least it brought great pain to my father, for whom I received love and tenderness and who I will never see alive again.  It is a terrible price to pay.

I committed a serious error for which I am truly remorseful.  I have sinned against God and man.  I know I am forgiven by Him who can see my inner self.  The sorrow of being separated from my dying father and from the rest of my family brings me punishment every day.  With God’s grace I hope to be able to serve my sentence with courage and faith.

I will use this experience the best that I can to warn young people engaged in such activities that there are brutal consequences for drug trafficking.  I cannot go back in time and change anything, but I can change the future.