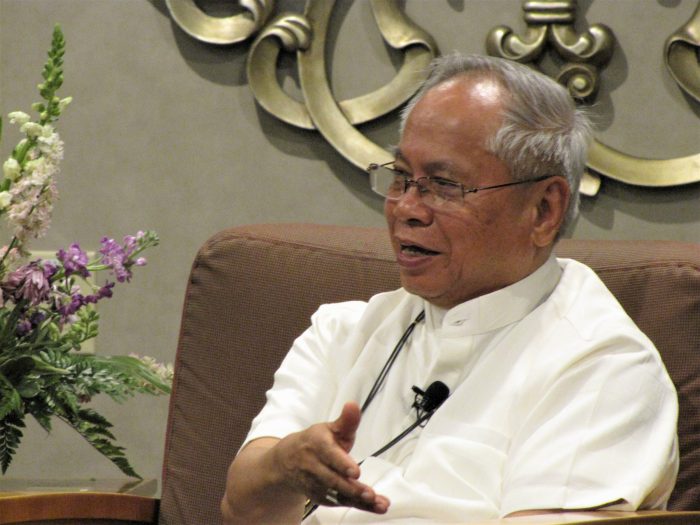 n an exclusive interview with ZENIT, Cardinal Orlando Beltran Quevedo, Archbishop of Cotabato in the Philippines, stressed this when discussing what advice he would give his young people, noting they ought not to feel pressure to conform. The first cardinal from Mindanao, spoke with ZENIT in Bologna, Italy, on the sidelines of the 32nd meeting in the Spirit of Assisi, Oct. 14-16, started by St. Pope John Paul II in 1986 and continued by the Community of Sant’Egidio, where representatives of different cultures, faiths and religions joined together to build “Bridges of Peace.” Mindanao has a majority Christian population. But most of the Muslims in the Philippines live in 5 provinces in Mindanao, called the Autonomous Region of Muslim Mindanao. The seat of the Archdiocese of Cotabato is found in this region. In the interview, the Filipino cardinal spoke about the Sant’Egidio encounter in Bologna and Christian-Muslim relations in his country, the Synod and his nation’s young people, the Vatican’s upcoming February summit on the protection of minors, and more.

ZENIT: Your Eminence, how would you say this encounter that started with St John Paul II’s Spirit of Assisi helps establish dialogue and peace among different religions and cultures?

I would like to answer that from personal experience, as I have been to three of these encounters in Assisi. Chairman Murad of the Moro Islamic Liberation Front and I were together at the Assisi World Day of Prayer for Peace in 2016. Pope Francis was already Pope. There at that time, we lit a candle for peace. It was very symbolic and reminded us of the peace process, still going on in the Philippines. I wondered if Muslims and Christians there would see the how the leaders of both faiths in the rebellion area were in harmony and peace in the presence of and under the gaze of the Pope.  It was a significant moment. It teaches a lesson to others on the worldwide stage who see leaders in conflict areas of the world being introduced to each other lighting together a candle for peace.  I think this gives the Spirit of Assisi a concrete example, a real symbol.

ZENIT: In the Philippines, how would you describe Catholic-Muslim relations?

At the grassroots level, in daily life, [there is] no problem. But deep inside the Christians and Muslims, there are historic biases and prejudices. Even though they say hello to one another and smile at one another and are good neighbors, there could be a time when mistrust erupts.  This is always a threat to the peace of a community.  There are many examples of bias. For instance, the mentality can be reflected in this way: if you are a ‘good’ Muslim, then Christians think: “you are like a Christian.”  The same thing with Muslims: if you are a very good Christian, in their eyes, then: “you are like a Muslim.”  Those kind of comments and judgments express what is in one’s heart.  We need to eliminate this mentality.  The Muslim-Christian relationship in daily life is harmonious, but inside each are biases and prejudices, historic ones going back to Spanish times.

ZENIT: Pope Francis shows a very open and trusting attitude towards interreligious dialogue.  Do you believe this is correct or as some say, a little naive?

I think he is aware of everything going on. The Holy Father knows and has known Muslims in his own country.  I don’t think this is naive–it is realism based on experience.  I recall that at one of these Sant’Egidio encounters, a woman was being aggressively questioned. Despite this hostility, she simply kept her composure and answered very politely and calmly; in the end, interestingly, she embraced that person as a friend. The person was flabbergasted; he who was aggressively critical, was now disarmed.  Hostility is diffused by kindness. That is what Pope Francis is doing.

ZENIT: What would you like to be the main takeaway today from your intervention, in this afternoon’s panel on ‘Islam and Christianity: Ways of Encounter’?

Listen and learn from each other. Listening is the pathway toward dialogue… If you are not listening, and you are caught up in your own little world and you simply answer questions from inside your little ‘box,’ you have not listened.  I remember a psychologist in the Philippines who would draw a heart with ears. The moral of the story being: listen with your ears, but most of all, listen with your heart.

ZENIT: As you know, at this time in the Vatican, there is the Synod of Bishops on young people, the faith and vocational discernment taking place. What do you think is most important to consider when reflecting on your young people in the Philippines?

The Philippines is a country of young people. The young people are the most dynamic group in the Church. In our dioceses, there are very dynamic youth programs. The youth are very enthusiastic. I hope they live their faith not only in a routine way, but in a youthful way with enthusiasm, and encouraging others to do the same.  I hope they are agents of dialogue. One sees often that Catholics, Protestants, Muslims in our Catholic schools in Mindanao become friends with one other [smiling].  It is inspiring for older men like me. My message to the young people in the Philippines:  be yourself,  be yourself… Forget those who are drifting, who escape reality through drugs. Be yourself. Live your faith daily and bring joy to your communities, neighbourhoods and friends. 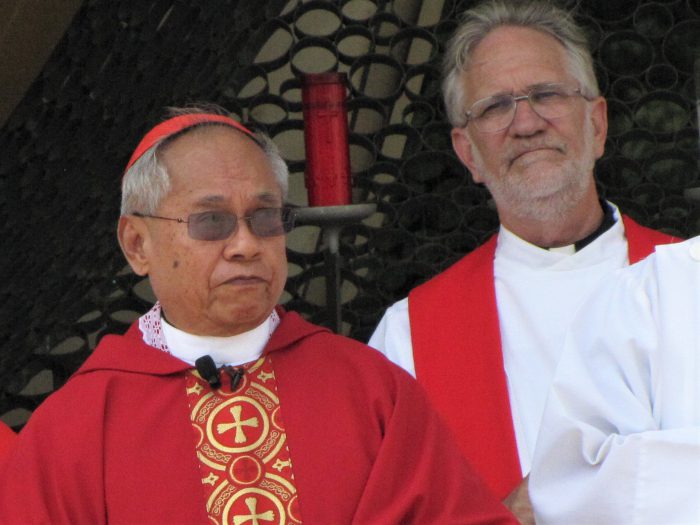 Former U.S. Provincial, Fr. William Antone, OMI is behind Cardinal Quevedo at a celebration held in 2015 at the National Shrine of Our Lady of the Snows in Belleville, IL.

ZENIT: Would you say that the main issue for your young people is that they cannot be themselves?

Some of the problems involve this ‘drifting’ way of life, lack of dreams, and this attempt to ‘escape’, if you will, especially through alcohol or chemical dependency. It is very sad for someone who has a friend suffering in that way; his heart goes out to that friend. Perhaps young people then contemplate whether they did enough for that suffering friend.  The young people in Rome [at the Synod of Bishops], or those who go out to the Asian Youth Congress, do not fall into this category. I would say 98% are dynamic and joyful living their faith as a foundation. They are simply like that. They inspire and encourage one another and build communities, friendships, with one another, not only among Catholics, but also among classmates in universities, whether they are Muslims and Christians, or members of other faiths.

ZENIT: As you know in February, there is going to be a Summit in the Vatican on the theme ‘Protection of Minors.’ Despite the negative press and lack of trust that could dissuade young people from being involved in the Church at this time, what would you tell them, in terms of why it is worth it to still be a person of faith and not lose hope?

I would tell them that even among the Apostles, there were two disciples who fell. One recovered. The other betrayed and rejected Christ completely. Like the Apostolic College, so is the Church, the Church that Christ loves.  So if young people see scandals in the Church regarding abuses toward minors and children, they should not forget that the great majority of the priests in the world are not like that.  This is part of the imperfections of an imperfect Church. It is this imperfect Church that Christ loves.

ZENIT: Is there something in February that you would like to see happen, in terms some sort of system, some sort of measure, in order for it to be effective?

The dioceses in the world are completing or doing protocols of ethics on the conduct of priests. It is essential that boundaries are respected and that they do not take advantage of their priestly calling. It is is a position of authority; they should not take advantage of that. There are protocols that are already approved by episcopal conferences. That is true of the Philippines. Others are in the process of being approved. These measures are necessary responses to everything that has scandalized people, young people and those who hope something will be done to end the abuses. Screenings and priestly education and formation are key. And when a priest falls, legal proceedings within the Church should be used. The convergence of the legal procedures of the Church and those of civil courts is necessary too for effectiveness. Both are important.

ZENIT: Would you say the zero-tolerance for priests, regarding sexual abuse, that is already Church policy, must apply to bishops?

Zero tolerance… One strike–you are out.