During this migrant crisis in Tijuana, there are a total of six Missionary Oblates of Mary Immaculate attempting to respond to the thousands of desperately poor as best they can. The six Oblates are: Fathers Lucio Castillio, Webert Merilan, Marek Stroba and Jesse Esqueda at Iglesia San Eugenio de Mazenod (St. Eugene de Mazenod Church) in La Morita, and Fr. William Antone and Bro. Peter Vasquez at Casa Estudiantil de Mazenod (Oblate pre-novitiate) in Tijuana. Below are excerpts from a telephone interview with Fr. Jesse Esqueda, followed by a re-posting of a Facebook post with photos by Fr. Esqueda. 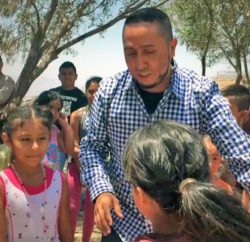 Fr. Jesse Esqueda, OMI with some of the children of his parish

“Most of the migrants are staying at a shelter. The shelter was originally close to the border, but after some of the migrants tried to cross over, they moved the shelter further away. The shelter is now about 40 minutes from the border and about 10 minutes away from where we live. The shelter is much better now, part of it is indoors and that’s where they are putting women and children. But most of the people are outside. They say there are about 6,000 people in Tijuana. They have many needs: food, drinking water, socks, everything. They have arrived here from a long and dangerous journey and they have almost nothing.

We have heard of a few instances of violence, but the great majority of them are very respectful, and are just trying to escape a difficult situation in their countries. They are willing to wait their turn and see if they have a case for asylum. The waiting part is very difficult because they don’t have work and they need something to do.

We have about 20 migrants staying with us for now. That number includes four women, four children and twelve men . As we get to know them, they tell us their stories and it’s very moving. They’ve come from a very painful past, they’re seeking a safer, better life for their families. We’ve asked what they will do if they can’t get into the U.S., will they stay in Mexico? They say definitely yes they will stay in Mexico, they don’t want to go back to their country because of the violence and gangs.

I am very moved by our parish community here in Tijuana. Even though they themselves are very poor, they’ve been bringing clothes and shoes and blankets, different things they have at home, whatever they can spare to help.

This is a very political issue and I know this has created a lot of anger on both sides of the border.  There are thousands of people in need of water and food and shelter. It is our duty as Oblates and as priests to try and respond to those basic human and spiritual needs as best we can.”

UPDATE: On December 11, Fr. Jesse sent a short message and some additional photos of the migrants he is helping:

“We go to the refugee camp (shelter) several times a week to take blankets, socks, underwear and food. On Saturday our young adults together with the migrants staying with us cooked a traditional Honduran meal (Baliadas) and we took them to the camp.

On Friday we took our migrant friends to Walmart to buy them clothes, shoes and hygiene supplies.” 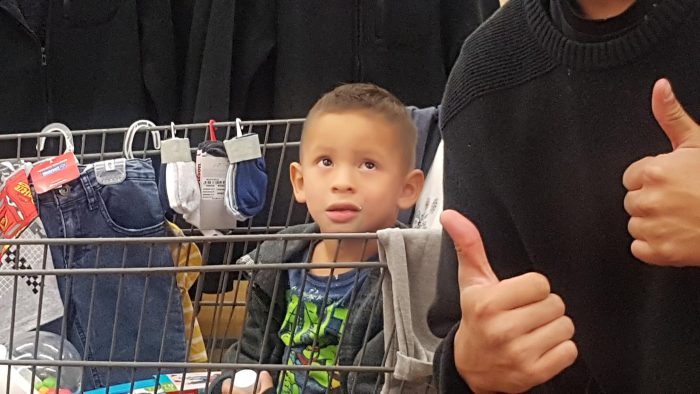 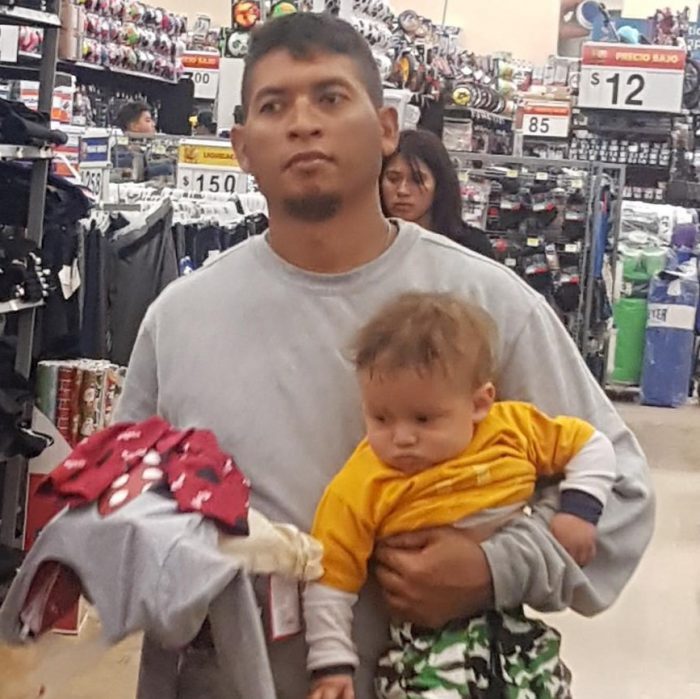 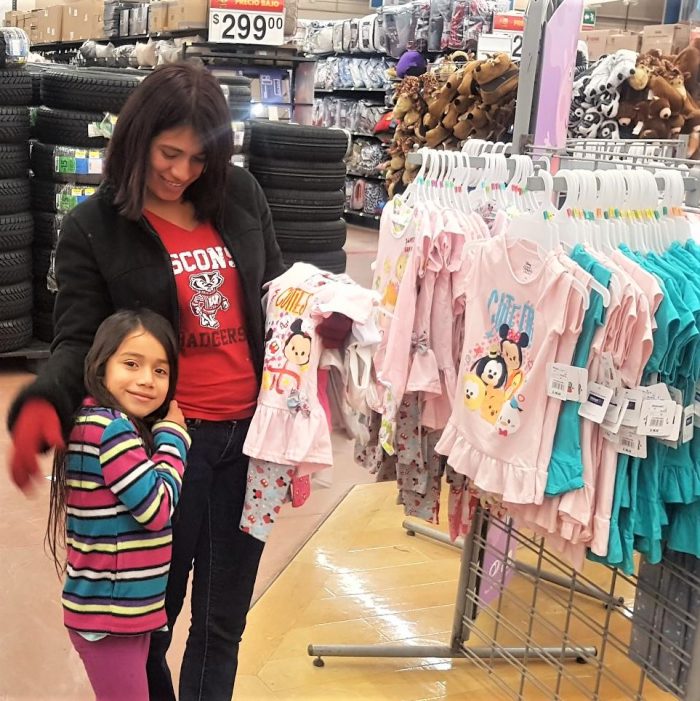 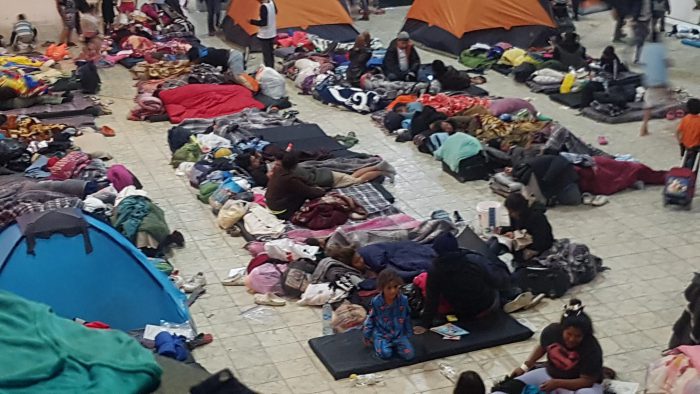 Sleeping on the floor at the indoor shelter 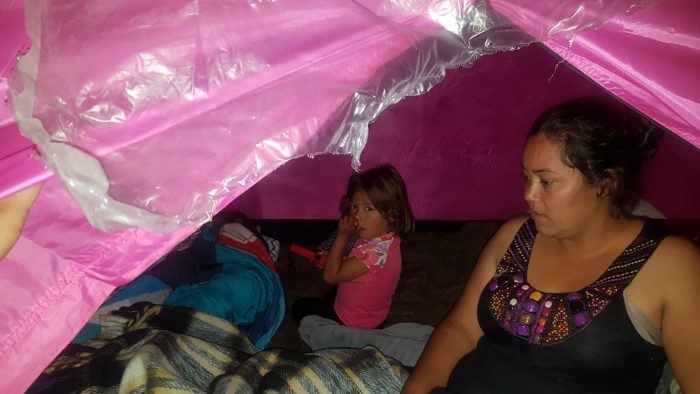 Under plastic during the rain at an outdoor shelter 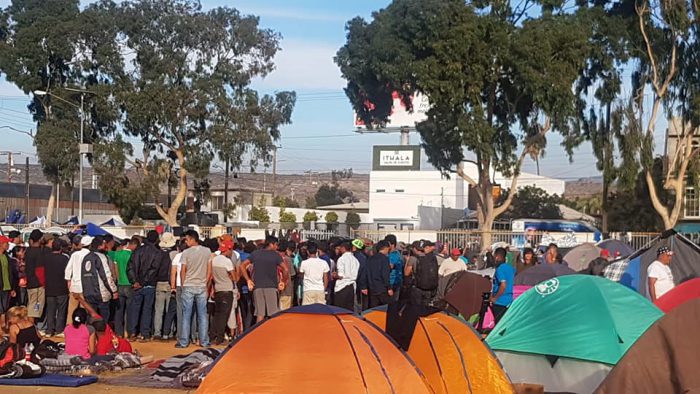 There has been a lot of talk and news coverage about the migrant caravan staying in Tijuana. It has been a very political issue, but regardless of your views about this issue there are thousands of people (children, women and men) who are in desperate need of food, water, clothing and shelter. They are staying outdoors in tents and wait in very long lines to get a little food. It started raining in Tijuana which will make the next few days extremely difficult for all of them. We are giving shelter to a group of children, women and young adults at our Youth Retreat Center. I ask that you pray for the safety of everyone, especially the children! “For I was hungry, and you gave Me something to eat; I was thirsty, and you gave Me something to drink; I was a stranger, and you invited Me in” (Matthew 25:35)” 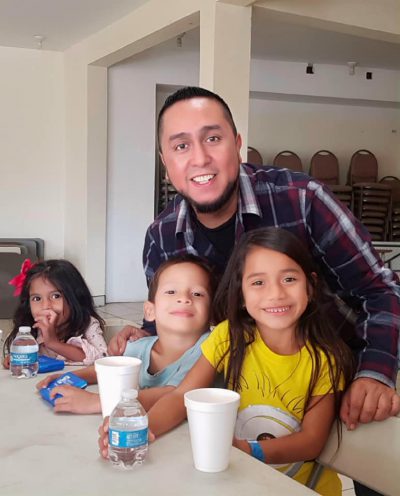