By Gus Bova,  Originally Published by the Texas Observer

A charismatic priest and the local diocese hope to save a 120-year-old chapel near the Rio Grande.

Around the Texas border town of Mission, Father Roy Snipes is known for his love of Lone Star beer, a propensity to swear freely and the menagerie of rescue dogs he’s rarely seen without. At 73, Father Roy, as he’s universally known, stays busy. He says around five masses a week at Our Lady of Guadalupe Church in downtown Mission, and fields endless requests to preside over weddings and funerals. Lately, he’s taken on a side gig: a face of the resistance to Trump’s “big, beautiful” border wall.

“It’ll be ugly as hell,” said Snipes. “And besides that, it’s a sick symbol, a countervalue. We don’t believe in hiding behind Neanderthal walls.” 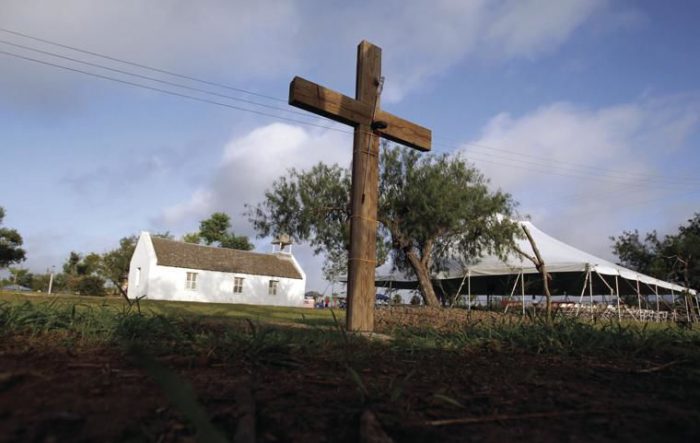 For Snipes, Trump’s wall is no abstraction. It’s set to steal something dear from him. Snipes is the priest in charge of the La Lomita chapel, a humble sandstone church that has stood for 120 years just a few hundred yards from the Rio Grande, at the southern outskirts of Mission. Inside its walls, votive candles burn, and guestbooks fill up with Spanish and English messages left by worshippers.

Snipes belongs to the Oblates of Mary Immaculate, the congregation of priests that built the chapel in 1899. Nearly 40 years ago, he took his final vows at La Lomita, which was named for a nearby hillock. At sunset, he said, he often piles a couple canines into his van and drives the gravel levee road that leads to the chapel, where he prays and walks the dogs. Local residents worship at La Lomita every day, and as a state historical landmark, it draws tourists from around Texas. For Snipes, the diminutive sanctuary serves as a call to humility. “We come from a long line of hospitable, humble and kind people, and La Lomita is a reminder of that,” he said. “It’s the chapel of the people.”

If Trump has his way, the people’s chapel will soon languish on the wrong side of a 30-foot border wall, or be destroyed entirely. Already, Border Patrol agents hover day and night at the entrance to the 8-acre La Lomita property, but Snipes thinks a wall would be another matter. Even if the chapel survives, and even if it remains accessible via an electronic gate in the wall, he thinks almost all use of the chapel would end. To prevent that, the Roman Catholic Diocese of Brownsville, which owns La Lomita, is fighting in court to keep federal agents off the land — but it’s a Hail Mary effort. Border residents have tried, and failed, to halt the wall before.