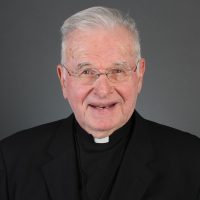 Recently, the eBay website offered for sale a genuine Oblate Cross for five hundred dollars. Every Oblate Cross has special, hard won value. An Oblate Cross has accompanied each Oblate during his life through difficult times and sweet times. They have valuable stories to tell, if they could.

In 1054 a.d., at a synod in Constantinople, the Eastern Church offered a new, graphic image of the crucifixion of Jesus Christ. On their crucifix, Christ was naked, a cloth spread across his loins, his body bent from suffering, arms stretched on the cross beam, dislocated, his head bowed in death, inclined toward his right shoulder.

In the early centuries of the Church, when it was displayed, the image of Christ on the cross was a catechetical tool to teach about the crucified, risen Christ to the expanding and largely illiterate Roman Empire Christian population. Christ was portrayed on the cross robed, upright, arms open to the world, his lordly eyes gazing outward.

Today there are many ways Christ’s crucified body is presented. Artists, liturgists and teachers high light various aspects of Jesus crucifixion, but the general details of the thousand year old, Constantinople image have stood the test of time, and that image is the most common way Christ on the cross is displayed.

Each Oblate at his perpetual vow ceremony receives an Oblate cross, brass, inlaid with ebony, a brass figure of Christ mounted on the cross and no other markings.

The image of Jesus Christ on the Oblate Cross used by Eugene de Mazenod, and which is the image most Oblate Crosses have, presents Jesus crucified, naked, cloth across his loins and body bent from suffering. But on the Oblate Cross Christ is alive, head raised, eyes closed. Many say, on the Oblate Cross, Christ’s face looks patient, indifferent to his torment, even to his anguish that God the Father has let him suffer and die by himself(Mt.27:46). 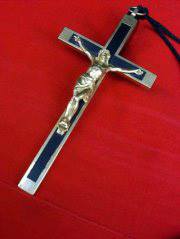 Eugene de Mazenod said the Oblate Cross will remind each Oblate, “of the humanity, patience, charity, modesty and all the other virtues with which they are to carry out their ministry.”

The image of Jesus Christ, dead on the cross, head bowed, throws a different light on the crucifixion. Christ died in accordance with the Scriptures(Rom. 5:9). God shows his love for us in that while we were still sinners Christ died on the cross for us(Rom.5:9). Christ died submitting to his father’s will. By his death Christ opened salvation to people.

When Eugene de Mazenod composed the first rule of life for the fledgling Missionaries of Provence, along with other resources, he kept on his desk, as a guide, the Redemptorist rule of life, written by Alphonsus Ligouri.

The Oblate cross, given at perpetual vows is part of the Oblate religious habit. It is also  used when preaching and teaching.

Christ on the Cross is a central image of the Christian faith. There are many different crucifixion images, some graphic, some beautifully shaped, some are abstract, cerebral images of Christ’s crucifixion.

Saint Basil, in the fourth century, said Scripture reveals to us the Word of God and also gives us the image of God. Holy images like Christ crucified are part of God’s revelation.