By Mark Reagan, Originally Published by the Brownsville Herald 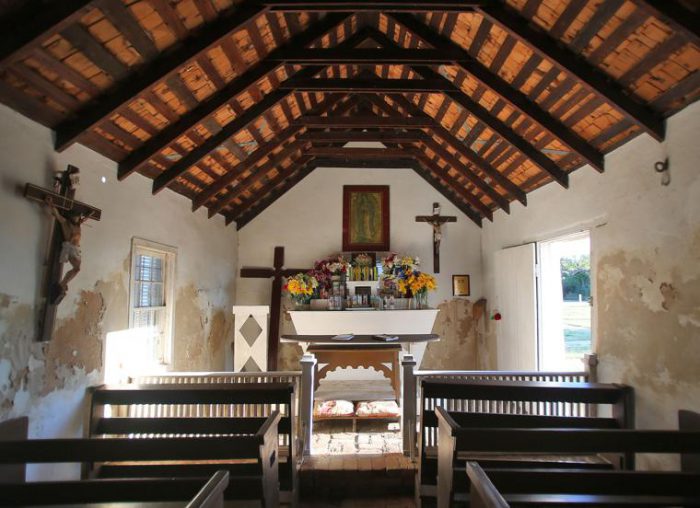 Inside the historic La Lomita Chapel as seen on Thursday, Jan. 3, 2019, in Mission. (Joel Martinez | jmartinez@themonitor.com)

The Diocese of Brownsville says that U.S. Customs and Border Protection has not confirmed whether the government intends to remove the historic La Lomita Chapel to accommodate the planned-border wall’s 150-foot enforcement zone, court documents indicate.

“CBP has represented in other informal conversations with community members that La Lomita will not be removed, and that there will be a gate in the border wall to allow access (to) the chapel, although the Government has not provided any official confirmation of its plans,” the Diocese said in a motion expanding on its religious objections to the federal government building a border wall on its property.

On Oct. 25, the federal government filed a Declaration of Taking to seize properties owned by the Diocese of Brownsville that include the La Lomita Chapel and property south of the Juan Diego Academy in Mission on brush land next to the levee. The Catholic Diocese of Brownsville is opposed and in late November, the federal government asked a federal judge to give it immediate possession of the property so that it can begin surveying.

The Diocese of Brownsville’s latest filing occurred on Dec. 31 and provides additional information about the future of the La Lomita Chapel as well as expanding on the Catholic church’s religious objections to a border wall, which it calls a physical symbol of division and dehumanization.

CBP’s plans for 25 miles of border wall in Hidalgo County include a 150-foot enforcement zone where federal authorities would remove all vegetation and install lighting and cameras. According to the Diocese of Brownsville, the La Lomita Chapel is 130-feet from the southern levee and would fall within the enforcement zone on the south side of the border wall. In the filing, the church said it anticipates that all the grass and trees around the chapel will be removed and replaced with lighting and surveillance equipment, destroying a tranquil and peaceful environment where parishioners can feel the presence of God.