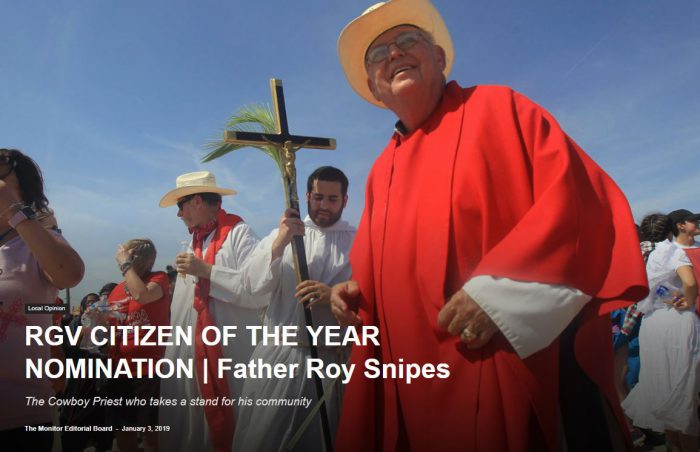 Father Roy Snipes, who for more than 25 years has served as the spiritual leader of his congregation, has transcended his role over time, and is now much more to the surrounding communities, his parishioners and the people of the Rio Grande Valley.

The influence of the man affectionately referred to as the Cowboy Priest — a moniker of sorts earned for his charming, old-world persona — has extended outside the confines of his Mission congregation at Our Lady of Guadalupe and impacted the region; reaching the masses in national media reports and cementing his inclusion as a nominee for the 2018 Rio Grande Valley Citizen of the Year.

The always-smiling, cowboy-hat-wearing, beer-drinking priest has for half a century stressed that relationships with people, the earth and God be as natural as they are intimate. In addition to spirited sermons, his contributions to Sunday Mass, which attracts hundreds of parishioners, also include appearances by his beloved pack of dogs along with his favorite music: country.

And he walks the walk.

In 1992, Snipes secured a couple acres adjacent to La Lomita Chapel, the mother church to Our Lady of Guadalupe. Snipes has held summer camps there, just yards away from the Rio Grande, for members of his parish as a way to reconnect with the environment and the land he believes God gave them dominion over, and more importantly to unplug from the world.