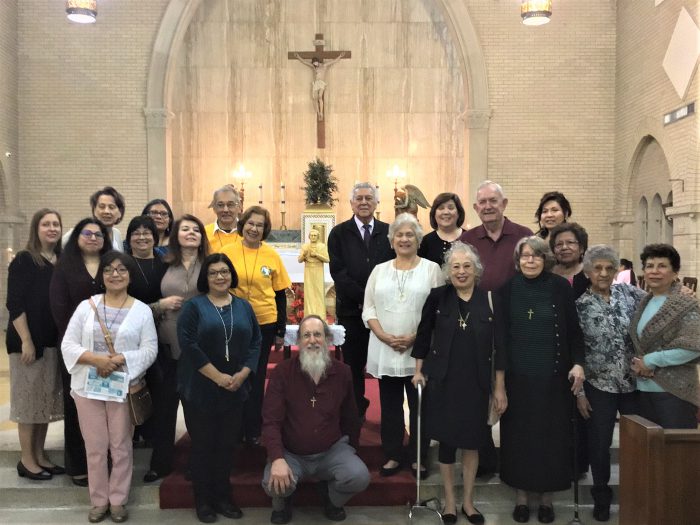 Sunday, February 17, 2019 was the 193rd anniversary of the approval of the Constitutions and Rules of the Missionary Oblates of Mary Immaculate by Pope Leo XII.  The date was even more special for some Associates of the Houston area who took the occasion to make their annual commitment to the charism and spirit of Oblate Founder, St. Eugene de Mazenod on “Oblate Day.”

The ceremony was originally scheduled for last December 7, the eve of the Feast of the Immaculate Conception, with thirty-two Houston area Oblate Associates slated to make their yearly commitment. But flash floods from a thunder storm made it impossible for fifteen of the Associates to attend. Nevertheless, Oblate Fathers, Sal De George and Henry Walker celebrated the Mass and received twelve commitments knowing that another ceremony would have to be scheduled. So on Sunday, February 17, 2019, the remaining Associates made their annual commitments along with Maricella Vara and Gloria Alaniz who made their first commitment and received their cross and pin.

The Sunday Mass was filled with those learning about our faith: adults and children of the RCIA program and children of the parish who attend catechism classes along with their families. The congregation heard Fr. Walker speak about the Beatitudes, finding a balance in our lives, and what February 17th means for the Oblates of Mary Immaculate and the Mazenodian Family. Fr. Walker continued, “As St. Eugene sought out priests to send to the missions, we as Oblate Associates are being gathered by the congregation to go out and spread the love of Christ to those abandoned. To seek those forgotten and let them know that God is present in their lives.”

The ceremony made Joseph Cipolla think about his years as an Oblate Associate: “I made my re-commitment in December but as I witnessed the commitment on Sunday I reflected on February 17, 1969, when I received my junior Oblate cross and how it made me feel a part of the community at 15 years of age. Then I thought of how our parish priest, a diocesan priest, told me about a conversation with Fr. De George about the Oblate Cross, Jesus looking up and at the world. He said it was a revelation to him to think of the corpus as alive and looking out to the world. It’s true; Jesus sought out the abandoned even while dying on the cross. It must have been part of the revelation St. Eugene witnessed.”

Associates, Mary Andrade and Anna Hickey, (not pictured above) who made their re-commitments in December wrote: “Father prayed for us and blessed us and as we prayed the concluding prayer together it touch my heart as always. I wanted to cry but I stopped myself and thanked God for bringing us there that night with the weather being so bad. We made it by the grace of God to hear the encouragement of Father Henry and Father Sal… It inspired me to fully commit myself to my promise completely and do the best I can for another year. Even though at times I know it will be hard, I know God with the help of our founder St. Eugene and Mary will guide us.”

Nearly 700 Associates are now active all over the U.S. Geri Furmanek, National Director of Oblate Associates says, “They are drawn by the opportunity to share in the charism and take the Good News to the most abandoned.  The Associates work beyond boundaries of parish or neighborhood, staying in communication about the needs of the people and resources they encounter. I am grateful to the Oblates for their tradition of being close to the people.  This, in addition to their invitation to men and women to use their talents and goodness to bring the Good News to those on the margins encourages the people to become part of the Mazenodian Family.