Originally Published by Today’s Catholic, Newspaper of the Archdiocese of San Antonio 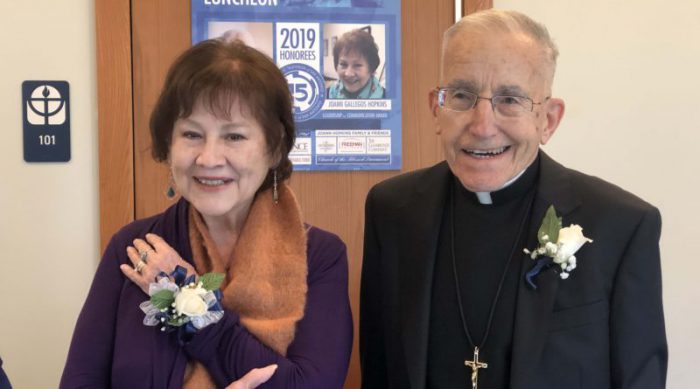 CTSA honored Father Banks with the St. John Vianney Award for his extraordinary pastoral care, his dedicated service in campus ministry and his leadership in vocations and formation, and a large number of Oblates were in attendance at the gathering to honor their confrere.

For more than 53 years, Father Banks has served the people of God as an Oblate priest. He has provided the sacrament of reconciliation to numerous ACTS retreats and parishes throughout the area. Father Banks has done this while serving in the Missionary Oblates of Mary Immaculate Provincial Administration for several years, traveling most weekends since 2006 to College Station to serve as a part-time campus minister and vocations director at Texas A&M’s Catholic Student Center. In addition, he serves as the vocations director for the Oblates’ Southwest Area and is the superior of the Oblate Madonna Residence, a convalescent and retirement center for his brother Oblates. Father Banks has also served as a pastor and assistant pastor in parishes throughout Center and South Texas.

Father Banks has the distinction of being the first member of a religious congregation to receive this honor. The St. John Vianney Award is sponsored by Catholic Life Insurance, and his name will be included on a plaque noting this recognition inside the Administration Building at Assumption Seminary.

Hopkins was honored with the CTSA Leadership in Communications Award for her faithful leadership in communicating Catholic faith in action. Hopkins has worked as an advertising representative for Today’s Catholic newspaper for 25 years. She has been an integral part of a small team which ensures the publication of the official newspaper of the archdiocese every other week. Hopkins has been instrumental in the production of special projects and commemorative sections in Today’s Catholic. She works closely with Catholic schools of the archdiocese to publish their events and activities, and has been honored with an Outstanding Leader in Catholic Education Award from the Department of Catholic Schools for her efforts.

The CTSA Leadership in Communications Award gives the station the opportunity to recognize the honoree’s vision and understanding of the importance media plays in the life of culture, and how the responsible use of it can make a positive difference.

Elizabeth Ruiz, host of the CTSA program “On the Scene” and newscaster for KTSA Radio, served as emcee for the event, and Auxiliary Bishop Robert Reed, president of the CatholicTV Network – CTSA’s broadcast partner for the past three years — traveled from Boston for a presentation at the gathering. 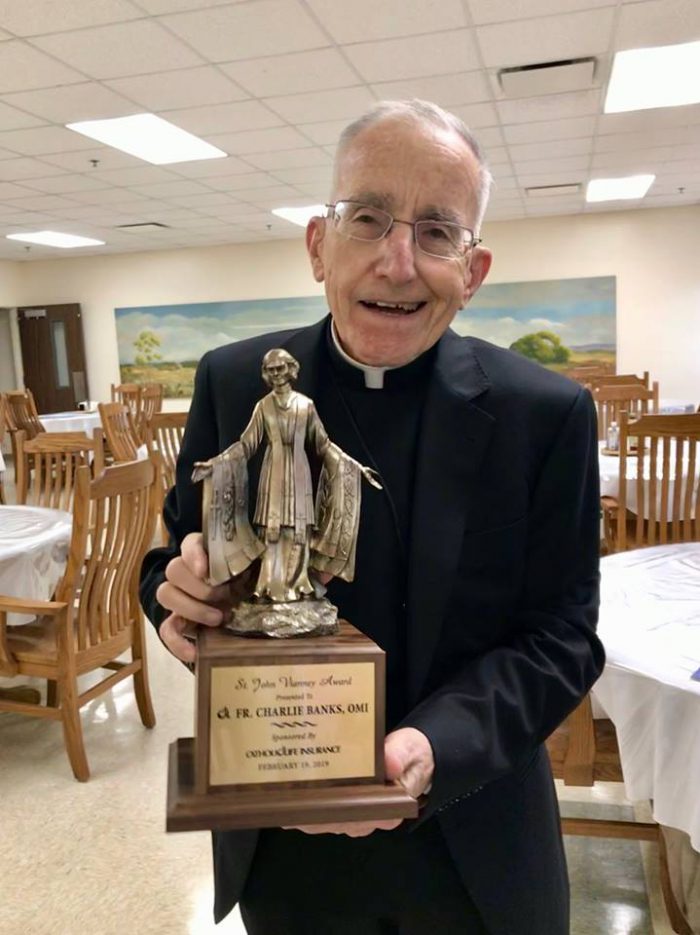 In his comments, Archbishop Gustavo García-Siller, MSpS, said that from the very beginning the church has used the arts to communicate Christ’s message and fix it in people’s minds and hearts. “Contemporary media such as television do this today. They are means with which the church, like the farmer in the parable, ‘broadcasts’ the seed in all directions,” he said. “Thus is the gospel ‘proclaimed from the rooftops.’ The collaboration of catechesis and television, therefore, deserves close attention and encouragement.”

The archbishop described how the communications revolution has had a profound impact on the world, with implications as great for religion as for any other area of life, saying that television offer marvelous opportunities for catechesis.

“The impact of television is very powerful, and the influx of information from all forms of media is overwhelming. A person living in the United States today is exposed to more information in a day than his or her counterpart of two centuries ago was in a year,” he said. “Communications media are relevant to every level of catechesis; they are pertinent to human development, to growth in theological understanding, and to faith experience itself.”

Archbishop Gustavo emphasized that knowledge of the audience is as important to successful broadcast production as familiarity with media technology. He stressed that broadcasters must understand people’s attitudes and values, and that religious and catechetical programming should be professionally excellent, and responsive to the interest and needs of viewers and listeners.

“Television can be particularly helpful in meeting special catechetical needs and problems. They can, for instance, be the most effective means of communicating with people in isolated and rural areas, as well as with such groups as the aged and shut-ins. Television also offers opportunities for ecumenical collaboration and for reaching large audiences,” he shared.

The Missionary of the Holy Spirit told listeners that he has the opportunity to know and talk with many interesting people in the Archdiocese of San Antonio, and that they have a deep sense of faith, a profound commitment to serve, and an uncommon knowledge of the local church.

He also thanked luncheon attendees, as their financial support of Catholic Television of San Antonio helps them carry out their ministry as a sort of “electronic parish” and reach people.

At the beginning of CTSA, then-Archbishop Patrick Flores reminded his brother priests that, “We are entering an age when media will become increasingly important to all of our people” and with the voice of a prophet warned, “If the church ignores this reality, we will suffer. We must make every effort to proclaim the Gospel message through all available means and resources.”

“It was with that sense of urgency that Catholic Television of San Antonio was born,” the archbishop continued. “CTSA, Television That Inspires, continues to respond to the challenges our church faces today, producing programming that tells powerful and personal stories of faith, provides understandable access to the teaching of the church, and comforts the lonely and fragile among us.”

In a recent message for World Communications Day, the Holy Father Pope Francis said, “Everything depends on the way we look at things, on the lens we use to view them. If we change that lens, reality itself appears different. So how can we begin to ‘read’ reality through the right lens? For us Christians, that lens can only be the good news, beginning with the Good News par excellence: ‘the Gospel of Jesus Christ, Son of God.’”

Archbishop Gustavo concluded by thanking CTSA supporters for helping the station to continue to express that vision. “With your continued generous support, prayers and participation we will realize the promise that was given birth many years ago; that CTSA will always be an important tool of the new evangelization, bringing that Good News to all in South Central Texas and beyond.”