Fr. Ramon BERNABE, Assistant General for Mission, recently visited Jolo, Sulu, in the southern Philippines, to convey the Congregation’s sympathies and to express solidarity with the Vicariate of Jolo after the January 27 bombing of the Cathedral of Our Lady of Mt. Carmel.

As of the latest count, 24 persons had been killed by the twin blasts inside and outside the Cathedral.  The dead included 16 civilians, 7 Army soldiers, and 1 person from the Coast Guard.  Fr. Bernabe also visited the families of some of the victims.  As many as 90 other persons sustained various injuries.  Fr. Bernabe visited 15 of them,, young and old, who were still in hospitals.  Some of them had amputated legs, fractures, third-degree burns, and/or shrapnel wounds. Former Provincial Larry de GUIA, who is a medical doctor, is personally attending to the needs of the injured.

The first blast inside the Cathedral happened at the time of the Second Reading of the Sunday Mass, killing some of the parish’s active and regular Sunday Mass goers—among them a husband and wife, elderly persons, a 14-year old girl, the former President of the Parish Council, the President of the local secular order of the Discalced Carmelites, and a teacher. A few moments later, a second blast exploded just outside the main door of the Cathedral, killing Army soldiers who were helping secure the Cathedral, as well as other Army soldiers who had rushed to help after hearing the first blast.  Also killed outside the Cathedral were some vendors.

The Mass was presided by Fr. Ricky Bacolcol, a diocesan priest of the Vicariate of Jolo. He did not sustain injuries, but was traumatized by the bombing, which was the second for him, the first being the bombing at the Sacred Heart Chapel of the parish, on Christmas Day 2010.

The Oblates and a number of lay people from the parish were already out of Jolo at the time of the bombing, as they were on their way to Cotabato City to attend the installation of the new Archbishop of Cotabato, Archbishop Angelito Lampon, OMI, formerly Bishop of Jolo for 20 years, who left Jolo only a couple of weeks earlier.  The Oblates returned immediately to Jolo after the incident.

One of the concerns now is to attend to the psychological needs of the surviving victims, especially the young.  Provincial Fr. Charlie INZON and Vicariate Administrator Fr. Romeo SANIEL are collaborating to address the myriad issues after the tragedy, which has been officially blamed on terrorist bombers.

The Cathedral, which sustained extensive physical damage, is presently closed and under the control of the military authorities.  Masses are being held in two chapels.  Only last November in 2018, Father General Louis Lougen visited Jolo, Sulu, in the course of his fraternal visit to the Philippine Province.

The Vicariate of Jolo has been entrusted to the Oblates of Mary Immaculate since 1939.  Three Oblates, including the Vicariate’s fourth Bishop, Benjamin de Jesus, along with a number of lay people, have been killed in violent incidents in these southernmost provinces of the Philippines. 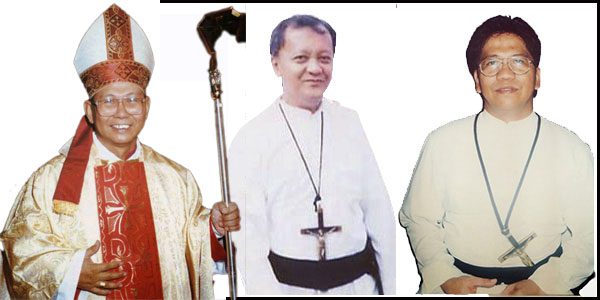