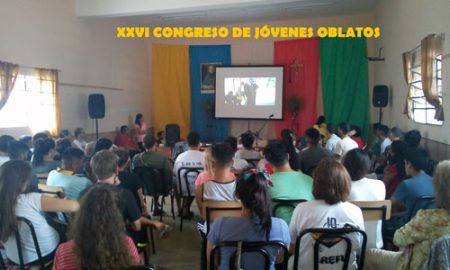 Recently, in the parish of La Candelaria, in the province of Córdoba, and with the support of the Oblate community and of many lay people of the parish, we celebrated the XXVI Congress of Young Oblates.  This time, however, there were not only young people, but also lay Oblates who participated by listening and accompaniment. From Santa Fe, Mendoza, Buenos Aires, and the surrounding area of Córdoba there was a re-encounter of the Oblate family, with Scholastic Brothers from Peru (Gonzalo and Gerson), and Paraguay (Victos, Eduardo and Diosnel).  From Uruguay, Fernando and an Italian Scholastic (Giovanni) who is doing his regency there, also participated. We were also accompanied by the COMI in the person of Verónica Amaro who is in the mission of Buenos Aires.

With the determination to listen to the proposals of young people and, from there to set out paths for mission, we began this process last year. We have been carrying out a work of bringing the Oblate youth ministry in the Argentine sector to life again. Ten years ago, the XXV Congress of Young Oblates was held, and since then, other ways of meeting together were chosen.  But for many, the memory of and the desire to relive that Congress still lay hidden. Both the vocations congress and the Year of Oblate Vocations have been moments of rethinking the mission with Youth. Visits to each group and parish stimulated participation and allowed us to relive those moments with strength and joyful hope. The final document of the 2018 synod was the basis for this encounter. “He walked with them… their eyes were opened … they set off.”

It was necessary to meet again, to reflect, to celebrate and to go out to share the good news of Jesus; and we did so.

During the Congress we lived moments of deep reflection on the document of the synod; one night we celebrated Eucharistic adoration and on the next, we venerated the relic of Saint Eugene. This moment was very emotional for all of us; there we prayed for vocations and for the congregation and we were invited to consider our own vocation.

After the Congress, 60 missionaries left for three places in the Prelature of Dean Funes, in the north of Córdoba, to share the mission days in Villa Quilino, in San José de las Salinas and in Lucio V. Mansilla. We lived the mission with joy and many responsibilities, in a climate of life-sharing among the members of each group, as we adapted to the high temperatures of those places. There, the missionaries were accompanied by Father Basilio MALU, who celebrated the Eucharist one day in each place. 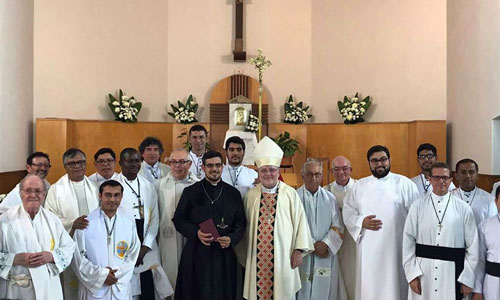 At the end of the mission, all returned to Cordoba to participate in the celebration of my Perpetual Oblation on February 2, in our parish of La Candelaria. In this way, we lived an intense week that meant a lot of effort but that left the heart full of joy and hope. Now we need to continue accompanying and reviving, in each community, the identity of the Oblate Charism as a way of living faith and mission. The feed-back we received from those who participated was very positive; it was touching to hear what many of the young people said: “Let’s invite others to live this experience!”