When Fr. Harry Schuckenbrock, O.M.I. was nine years old, he began herding cattle in Texas.  For the past 60 years, he has been herding the faithful to a better understanding of the Good News.

“I was baptized by an Oblate so I guess you can say they have been part of my entire life,” said Fr. Harry.

Born and raised in a farming community in the Rio Grande Valley of Texas, Fr. Harry didn’t really know any priests other than Oblates.  The Oblates ministered in rural area and were rather eccentric.  Young Harry admired them greatly.  The boy assumed that cowboy hats and boots were standard attire for a Catholic priest since his Obate pastor wore them.

The Schuckenbrock farm was along one of the few roads in the area and the Oblates would travel it frequently, often stopping by the farm for a bite to eat and fellowship.  As a child Fr. Harry remembered trying to sleep while his dad and the Oblates played cards, smoked, joked and caused quite a ruckus.

“The Oblates were just part of the family and my dad loved them,” said Fr. Harry.  “Mom on the other hand didn’t really care for them.  The Oblates would give her suggestions on how to cook and she wasn’t having any of that.”

Harry became an altar boy at his church and the Oblates began pestering him about becoming a priest.  He kept making excuses to avoid religious life.  As a freshman in high school, Harry was a self-described “big deal” in his local Future Farmers of America chapter and he was convinced his future was on a farm.

But the Oblates kept planting the seed of religious life inside the young man.  Eventually a calling developed and Harry agreed to spend his sophomore year of high school at the Oblates’ St. Anthony Prep Seminary in San Antonio, Texas.

“I never regretted my decision to go to St. Anthony.  The education, both academic and spiritual, was top notch,” said Fr. Harry.

Ordained in 1959, Fr. Harry spent much of his ministry as a pastor at Oblate parishes in Texas, including Brownsville, Houston and Port Isabel.  The parish hall at one of Fr. Harry’s former parishes in named in his honor.

In addition to his pastoral work, Fr. Harry also served as superior of St. Anthony Prep Seminary, headed a diocesan program of Marriage Encounter, and for seven years was the Religious Education Director for the Diocese of Brownsville.

“That assignment was right after Vatican II so everybody was trying something new and it was all over the place,” said Fr. Harry.  “It was an exciting time for the Church.”

During his later years of missionary work, Fr. Harry was in reduced-active ministry, helping out Fr. Jim Erving, O.M.I. at Our Lady of Refuge Parish in Roma, Texas.  Father Jim reinvigorated Fr. Harry’s missionary spirit, and the elderly Oblate was active in numerous parish ministries.  Sadly, Fr. Jim would be diagnosed with brain cancer, and would succumb to the disease at the age of 43.

“Father Jim was truly a character who treated me beautifully,” said Fr. Harry.  “He was always so positive, even when his body was failing.” 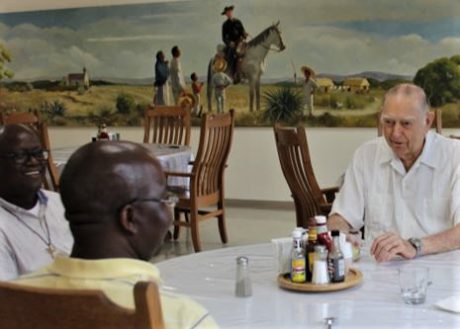 Father Harry moved to Madonna House, the Oblate retirement community in San Antonio, on his 80th birthday.  It has been his home for the past five years.

“I spent much of my life doing head religion.  Now at Madonna House I can focus on heart religion,” said Fr. Harry.

Father Harry loves the minimal schedule at Madonna House.  Outside of daily Mass, meals and a few organized activities, he is free to do whatever he likes.  Father Harry enjoys reading, usually in his favorite chair with a picture of Oblates on horseback on his wall and a cowboy hat on the dresser.  He now tends to stay away from books on theology, preferring to avoid “head” religion so he can focus on “heart” religion.

Recently Fr. Harry reread To Kill a Mockingbird.  The novel strikes a chord with Fr. Harry who also witnessed the effects of profound racism in the South.  In the book, as the lawyer Atticus Finch walks out of the courtroom, the African Americans rise as a sign of respect for the noble Atticus.  A man turns to Atticus’ daughter and tells her, “stand up, your father is passing.”

The same thing could be said about Fr. Harry – “stand up, your Father is passing.”