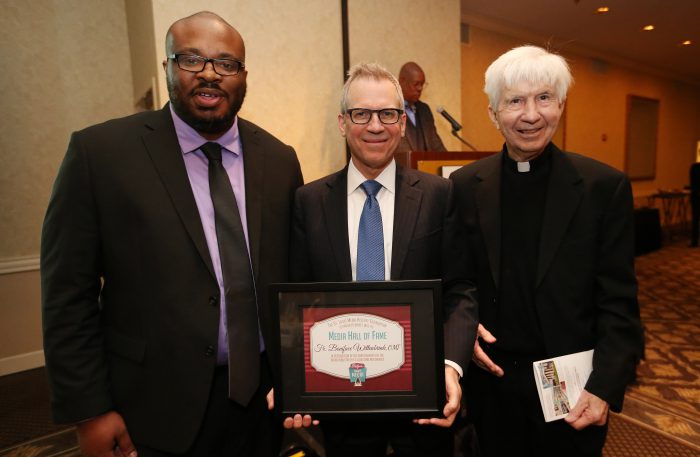 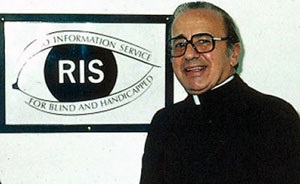 At a gala dinner held atop a St. Louis hotel, Fr. Boniface (Boni) Wittenbrink, OMI (1914-2017) was inducted into the St. Louis Media Hall of Fame along with several other local media celebrities on March 30, 2019.

Fr. Wittenbrink was the founder of the “Talking Book” program for the St. Louis metropolitan area in 1972. It was called Radio Information Service and it provided sight-impaired individuals with special receivers allowing them to hear an audio stream consisting of news and features from the daily newspapers, as well as readings from books and magazines.

Fr. Wittenbrink raised funds for equipment and to provide free receivers for the audience. He also recruited volunteers to read over the air, run the equipment, and deliver and service receivers. He went on to establish similar services in ten Illinois cities, as well as in Texas, Canada and the Philippines. The service founded by Fr. Wittenbrink continues to serve the area under its new name, Mind’s Eye.

The late Fr. Wittenbrink was represented at the ceremony by his sister, Meg Wittenbrink, Tom Williams of Mind’s Eye, and a member of his religious order, Fr. Allen Maes, OMI.

The Media Hall of Fame is sponsored by the St. Louis Media History Foundation which is actively involved in pursuing all aspects of preserving local media history. They have an oral history effort in which media veterans are encouraged to share their memories for posterity.

The Foundation also maintains the St. Louis Media Halls of Fame and has established a college scholarship in the name of the St. Louis media and restaurant critic, Joe Pollack, who was an original board member.

Below is an archival interview with Fr. Wittenbrink from 2008 wherein he tells about the founding of Radio Information Service, and a humorous story about a run-in with a newspaper publisher who thought Fr. Boni was violating his copyright. (Interview runs 10:38)