This weekend Father Frank Uter invited me to preach a short Lenten mission at the Immaculate Conception Parish, Denham Springs, Louisiana, to commemorate the centenary of the arrival of the Oblates in this area.

After the mission, Fr. Santucci cuts the celebratory cake!

As I preached on our Oblate charism and spirituality, a large number of  parishioners approached me warmly recalling the Oblates who had served here. Specially remembered was Ron Walker, who had been pastor for nine years before leaving for Zambia.

The centerpiece was the gate! Here are the details of from the parish bulletin: 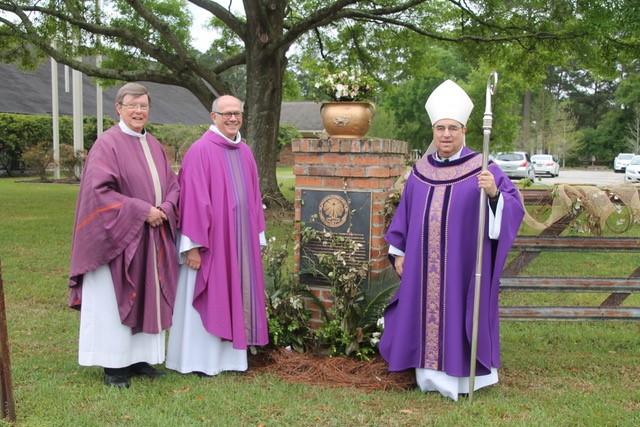 We already have a memorial on the grounds to the Oblates, not some big granite memorial but rather an old, rusty gate which prior to 1964, stood near Hatchell Lane when our church campus was nothing but pasture and woods.  Richard Young saved the gate when the property was developed, placing it in his barn, and years later pulled them out and in 2011 gave them to us when we celebrated the 50th Anniversary of our parish  A few years later, Bishop Muench walked through it when we dedicated the Faith Formation Center.  In 2015 the gate was placed permanently on the property as a memorial to the Oblates who served here throughout Livingston Parish from 1919 until 1983. 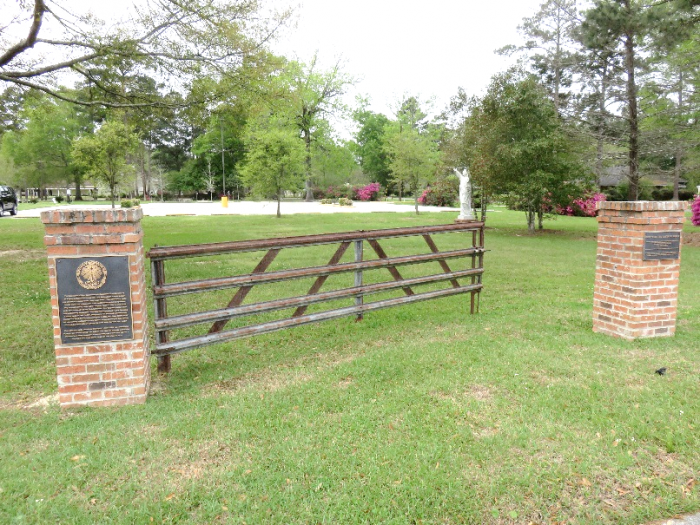 Two bronze plaques were made for the posts which hold up the gate.  The one on the left has a brief history of the gate and dedication to the Oblates and the one on the right has our Mission Statement which begins with our being a welcoming community.

“The Missionaries of Mary Immaculate were founded in Aix-en-Provence by St. Eugène de Mazenod on January 25, 1816. Their mission as stated in their coat of arms is to minister to the “poor in our midst.”  They ministered to youth, those in prison, and in those areas of the world most in need of their presence.  They accepted ministry to the entire Livingston Parish on May 12, 1919, which at the time numbered very few Catholic families.  Over the years, thanks to their dedicated ministry, Immaculate Conception Mission continued to grow, becoming a church parish in 1960.  In 1964, this property was purchased and Immaculate Conception Church Parish continued to grow.  In 1983, the Oblates felt the parish had grown strong, and faithful to their mission, decided to relinquish their ministry here and direct their efforts in parts of the world where they were more needed.  These gates were at the entrance to this property which in 1964 was a combination of pasture and wooded acreage.  We dedicate these gates as a memorial to the Oblate Missionaries of Mary Immaculate who opened the gates of faith, hope and love – the gates of life – to our church parish and those whom we serve.”

“OPEN WIDE THE GATES OF MERCY

These gates were dedicated by the parishioners of Immaculate Conception Parish

In honor of the Oblate Missionaries of Mary Immaculate

We pray that the Year of Mercy may always be expressed in our Parish Mission Statement:

Immaculate Conception Church Parish and the Mission of the Sacred Heart is a welcoming community, centered in the Eucharist, rooted in faith, growing in fellowship, and sharing in unity the mission of Christ entrusted to us.”