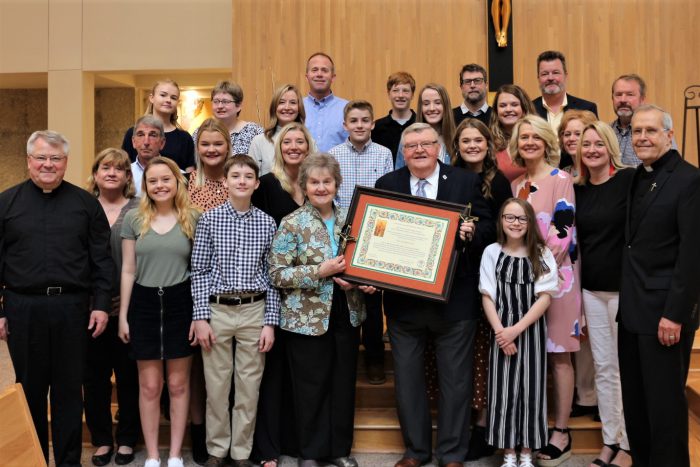 For Jack and Sandy Weck, more than 50 years of work and service to the Missionary Oblates of Mary Immaculate was celebrated with friends, family and Oblates on Saturday, April 13, 2019 as they were named Honorary Oblates of Mary Immaculate (HOMI) at the National Shrine of Our Lady of the Snows in Belleville, Illinois. The Shrine was the perfect spot for the occasion since Jack was hired in 1960 by the Shrine’s Founder, the late Fr. Edwin Guild, OMI. Retired since 2010, Jack remembered that day 59 years ago: “I first came into contact with the Oblates while I was still at Cathedral high school. Fr. Guild sent an announcement that the Oblates were looking to hire a couple of young men at their Missionary Association of Mary Immaculate. I applied for one of the jobs and was hired. I graduated high school on a Sunday and started work on Monday. Actually it was a blessing for me because it was right down my alley. I loved being involved in the Catholic Church and after I found out what the Missionary Oblates were all about I saw it was a good fit for me.” 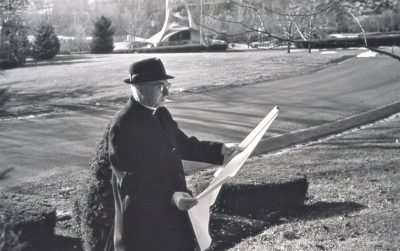 Jack began his career in the production department where the fund-raising letters were printed and mailed. But he had been involved in photography since high school, and was soon re-assigned to take photographs for the various printed materials and press releases, and that’s what he did for the next 35 years before moving into the acquisition of premiums (thank you gifts for donors) and finally, charitable gifts. 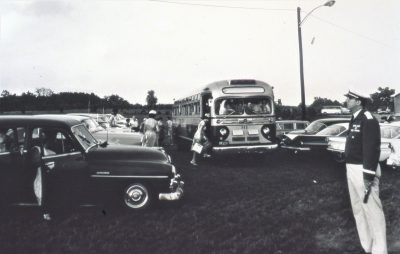 The Missionary Association of Mary Immaculate was founded in the early 1940’s to raise funds for the Oblate’s missions and for building the Shrine of Our Lady of the Snows. Since 1944, the Annual Novena to Our Lady of the Snows had been held at the Oblate’s St. Henry’s Seminary in Belleville. The year after Jack was hired, in 1961, the Novena was held for the first time on the partially finished Shrine grounds. Like many of the Oblate employees, Jack worked each night helping to park the hundreds of cars that brought families to pray during the Novena.

Fr. Guild also recruited Jack and other employees on weekends to plant many of the trees that now tower over the Shrine’s 200 acres.  “We planted thousands of tiny trees and now they’re so tall…he would be out there with us working, he had a farmer’s tan like everyone else,” Jack recalled. 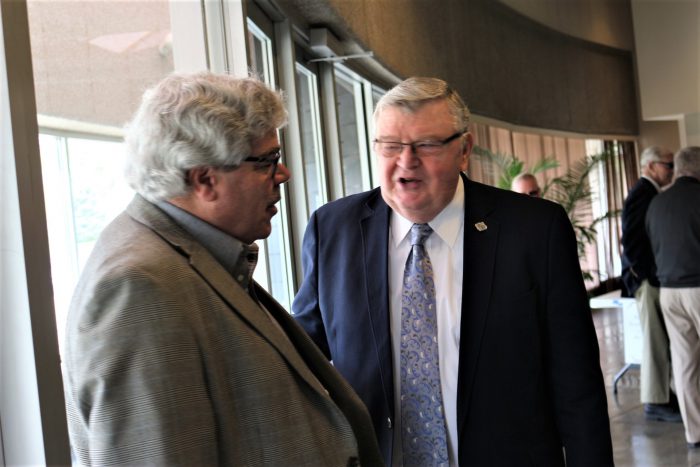 Jack personally greeted the guests as they arrived for the Mass. Here he greets Fr. Mark Dean, OMI

“Fr. Guild always said what he thought. Every morning he would make rounds at the Missionary Association, he always called me Johnny, I don’t know why, everybody else always called me Jack or ‘Whitey’ (because of Jack’s white-blond hair in those days). One morning he came into my office and said, ‘Howdy, howdy’ – that was his greeting. He said, ‘Well Johnny, I guess you’ll be getting a haircut today.’ That was his way of telling you it was time to get a haircut,” laughed Jack. “He was a great guy and treated me very well.”

Over the years Jack continued to work each night of the novenas, no longer parking cars, now he took photos for the various Shrine publications and for the local diocesan and secular newspapers. He wasn’t there alone for long either. He and his wife, Sandy, whom he met through friends were married in July of 1963. Thereafter she was a full partner, while Jack lugged the tripod and shot the old, 4 x 5 film, she attended all the services, managing the younger members of the Weck family which eventually totaled six children. “She was really involved in the ministry out there, just in another way.”  Sandy even got their kids involved, “They filled Holy Water bottles in our basement, the Missionary Association gave them a penny for each one they filled.” 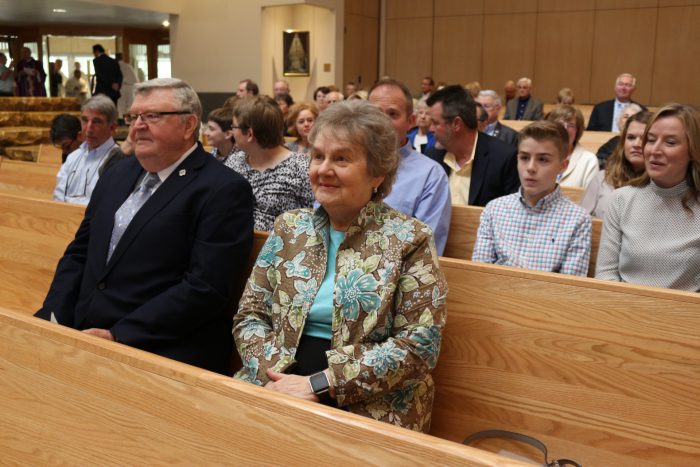 Jack and Sandy await the start of the Mass with children and grandchildren right behind them.

He has seen a lot of change over the nearly 60 years since he started working for the Oblates: “Certainly the photography has changed, it’s all digital now which is sort of a mechanical change. The appeals are different too, but I feel like the message hasn’t changed that much because the Oblates are still doing what they did before, reaching out to the poorest of the poor, and they’ve taken on even more difficult missions.”

After so many years, does Jack feel like he’s part of them? “After you work for them for so many years, sometimes I’ll say, ‘We’ when I mean the Oblates. I’ve been with them so long I feel like I’m part of them. I’ve had the chance to go to so many of their missions to take pictures. Sandy and I had the opportunity to go to Oblate ministries in Lourdes, Aix-en-Provence, and Rome, it’s been thrilling and we do feel like we’re part of it. 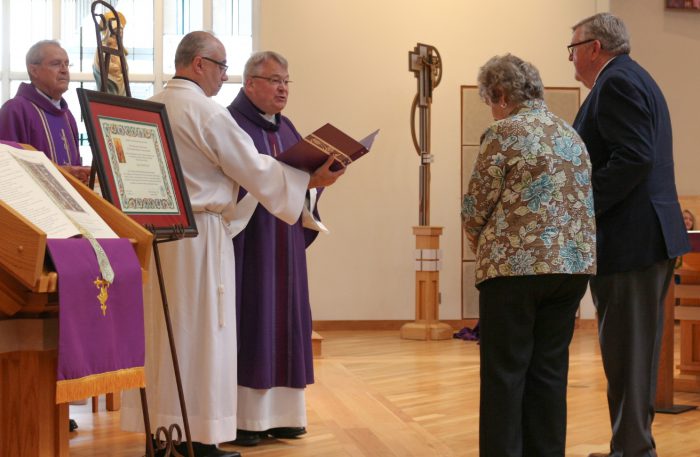 What priests come to mind? Sandy said, “Fr. (James) Taylor, Fr.(William) Clark, and Fr. (David) Kalert, Fr. (Elmar) Mauer, Fr. (Louis) Studer more recently. He is always so friendly and makes you feel comfortable – all of them do.”  Sandy then related the story of meeting Fr. Thomas Singer: “When I was introduced, I said hello and accidentally winked my eye, so since then  whenever he sees me, he winks,” she laughed.

Jack has special memories of Fr. David Kalert with whom he worked closely when Fr. Kalert was Director of the Missionary Association: “Fr. Kalert was a real backbone for me at MAMI.”  Jack also remembers late in his career when big changes at MAMI put his status at risk, Fr. Studer insisted that be kept on in a new position. 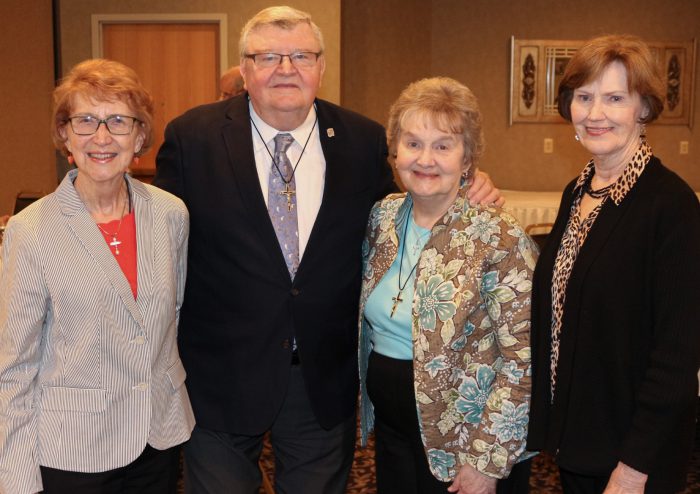 The Church of Our Lady of the Snows was filled with many friends and former colleagues in addition to a large gathering of Jack and Sandy’s children and grandchildren. Speaking for the family, daughter Diane Green said, “I am so happy my parents were recognized with this amazing honor.  I’ve watched them live the Oblate charism my entire life.  I hope to achieve a fraction of what they have done.  My father’s work with the Oblates inspired me too!  I have worked for them and with them for 31 years.  I feel blessed to partner with the Oblates every day.”

“U.S. Provincial, Fr. Louis Studer presided at the Mass and presented Jack and Sandy with a copy of the proclamation of their HOMI status signed by Superior General, Fr. Louis Lougen, OMI. The honorees received the Oblate crosses carried by two old friends of theirs: the late Fathers William Clark and James Taylor. Fr. David Kalert delivered the homily.

At the celebratory luncheon at the Shrine Restaurant which followed the Mass, Jack reflected, “It’s such a great honor, I felt all my life like I was part of the Oblates, now I guess Sandy and I really are!” 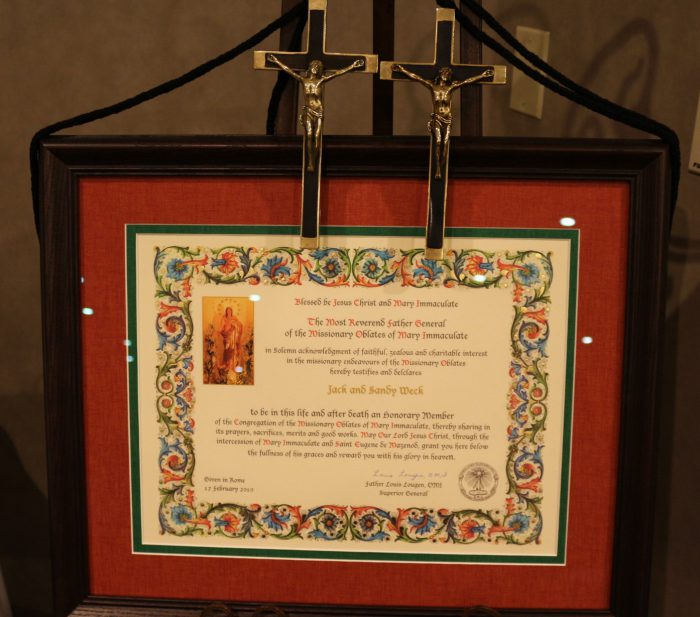 The official proclamation signed by Superior General, Fr. Louis Lougen, and their Oblate Crosses on top.