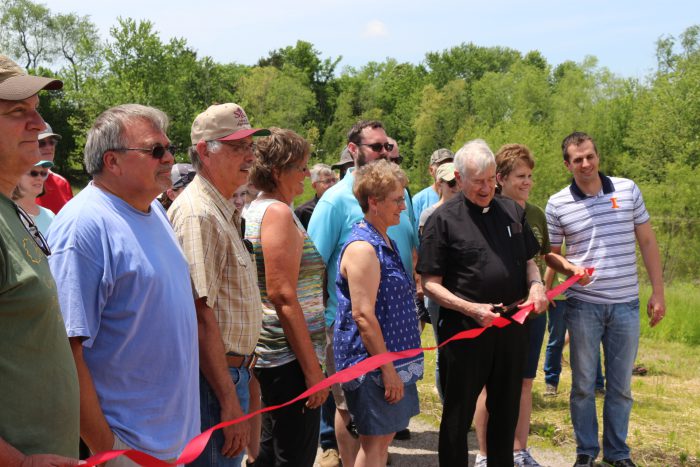 On Saturday May 18, 2019, some 110 people gathered in a rural area of Monroe County, Illinois to celebrate the work of Fr. Paul Wightman, OMI. Not for his 60-odd years as a priest mind you, but for his secondary, 70-odd year career as a spelunker, surveyor, and mapper of caves, most notably, Fogelpole Cave, the largest and most biologically diverse cave in Illinois. 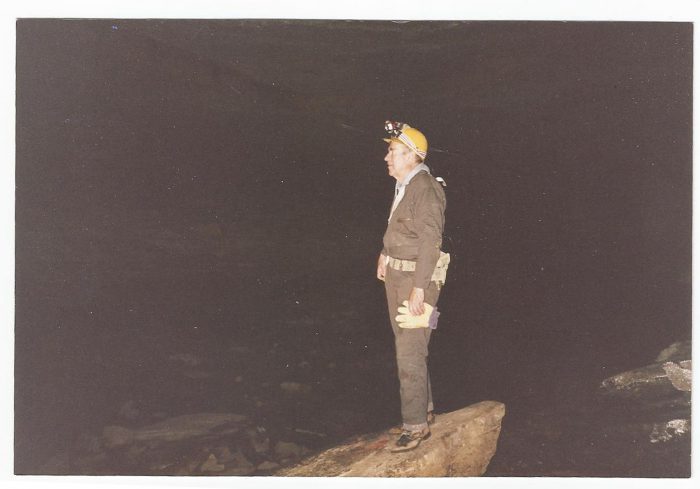 Fr. Paul during one of his cave explorations

It was back in 1949 while still a student at the Oblate’s St. Henry’s Prep Seminary in Belleville, Illinois, that another student, Cletus Meier, mentioned to young Wightman that he knew of a cave on his uncle’s farm. The uncle, Joe Fogelpole showed the boys the opening and, sticking his head into it, Wightman saw a crevice with a 15-foot drop. The two young men fashioned a rope ladder and climbed down into what Wightman described as a tremendous cave with three different passages all heading in different directions, Wightman was hooked for life. Though his friend Cletus was forbidden further explorations of the cave by his parents, Fr. Paul’s parents reluctantly agreed he could continue. Fr. Paul’s family came to know the Fogelpole family well during his many trips into the cave in the coming years. 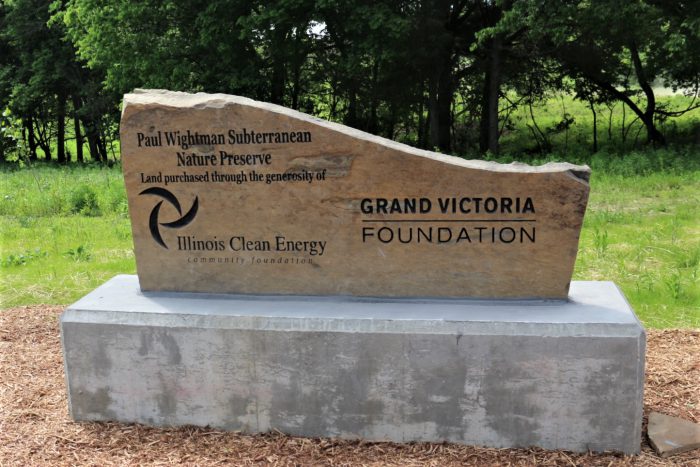 It was later, after his ordination in 1955 that Fr. Paul, along with some of his students, would return to Fogelpole Cave and begin the years-long process of mapping some 8 miles of passages in the system. The cave is now part of a 27-acre nature preserve owned by the Illinois Department of Natural Resources. The cave is currently closed to any outside visitors due to the epidemic of white-nose syndrome which threatens the existence of the several species of bats which inhabit the cave. Human visitors could inadvertently carry the disease (deadly to bats but harmless to humans) to the Fogelpole bats, or out to other bat colonies. 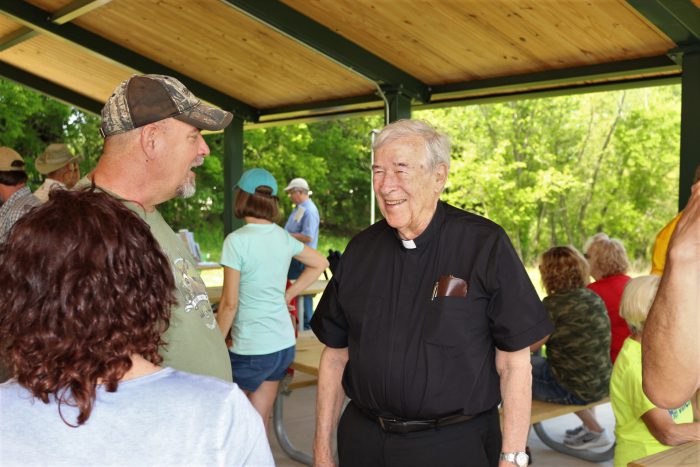 Fr. Paul Wightman, OMI visiting with the many well-wishers at the dedication

That preserve upon which the Fogelpole Cave sits is now surrounded by a larger, more visitor-friendly nature preserve which has been named in honor of Fr. Paul’s legacy of exploration and preservation of the caves of Monroe County: The Paul Wightman Subterranean Nature Preserve. The new preserve is a project of a local group of dedicated conservationists, the Clifftop Alliance. Clifftop (Conserving Lands In Farm, Forest, Talus, Or Prairie) is a grassroots nonprofit, nonpartisan organization founded in 2006 with the mission of: “…partner land-holders, communities and other governmental and non-governmental organizations to focus on conserving, preserving and protecting the Mississippi River Bluff lands of Monroe, Randolph and St. Clair Counties, Illinois.” 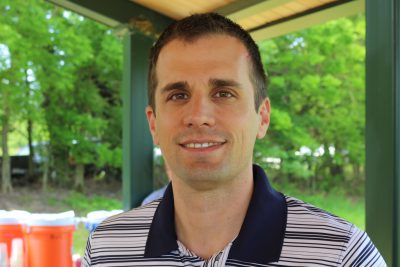 According to Clifftop’s current president, Jared Nobbe, the group partners with businesses, foundations, and donors to identify and purchase “high-values conservation property” in Monroe County for preservation. Clifftop’s first major project was the purchase of the 475-acre White Rock property in 2010. Clifftop describes White Rock as, “…a mosaic of hill prairies and limestone glades, a large swathe of upland forest which is home to several threatened or endangered species.” White Rock now offers visitors opportunities for hiking, bird-watching and wildlife photography. 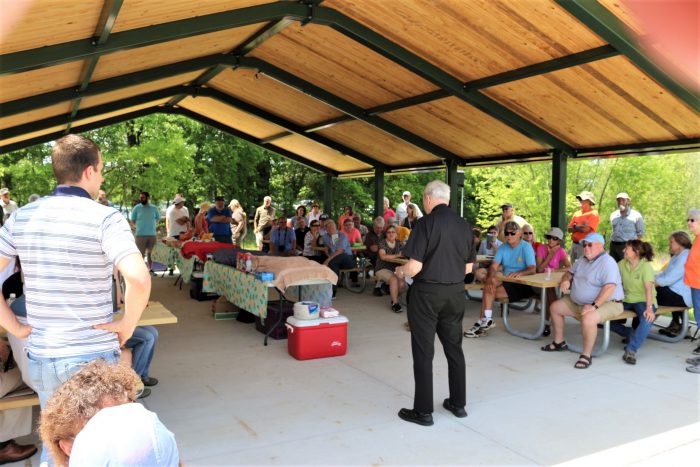 The new Wightman Preserve was made possible through Clifftop’s purchase of the 535-acre Seibert Farm in 2014. The property encompasses the Fogelpole Cave site and overtops much of the cave’s groundwater-system. The Paul Wightman Subterranean Nature Preserve features five hiking trails including one that is disability-accessible along with the William Zimmer Family Pavilion for picnics, and restroom facilities. 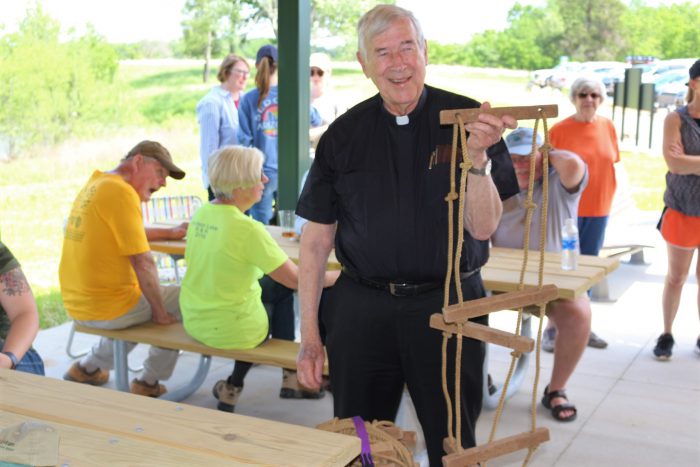 Fr. Paul showed one of the “tools of the trade,” a rope ladder to the crowd.

At Saturday’s gathering and ribbon-cutting, Fr. Paul expressed his gratitude to the crowd and entertained them with stories of beginning his cave-journey back in 1949. At age 90 Fr. Paul doesn’t explore caves anymore, besides, he’s still pretty busy serving five rural parishes in and near Ava, Missouri.

Nevertheless, thanks to the Clifftop Alliance, Fr. Paul’s legacy as a pioneer in the exploration and mapping of Illinois’ largest cave is assured with the opening of the  Paul Wightman Subterranean Nature Preserve.

For more information about the Paul Wightman Subterranean Nature Preserve or the Clifftop Alliance, contact them at cliffmbr@htc.net 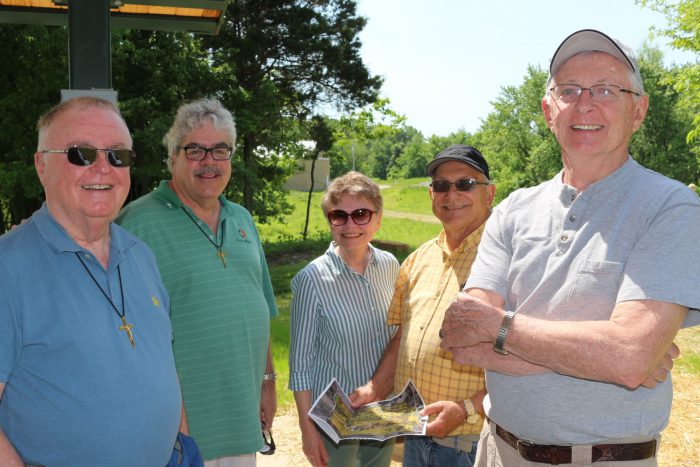