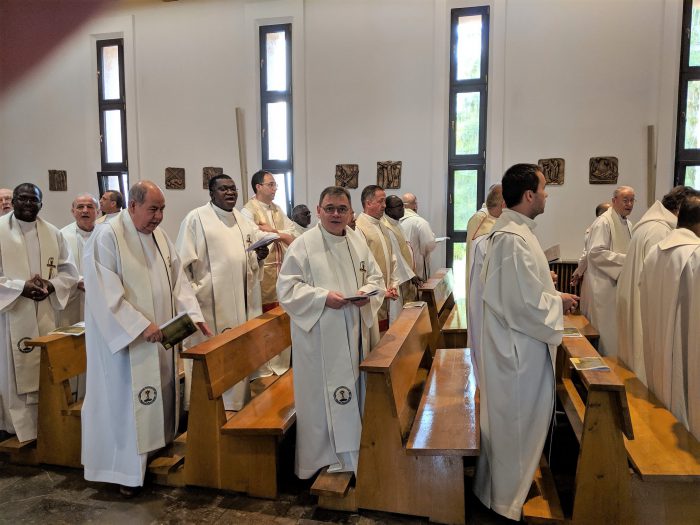 Over 80 Oblates concelebrated the Closing Mass of the Interchapter at the Oblate Scholasticate in Obra, Poland.

Two short video “featurettes” from activities around the recent Oblate Inter-Chapter Meeting in Poland. First, as he does wherever he goes, Most Rev. Louis Lougen, OMI, shared the Cross of St. Eugene de Mazenod with a group of Oblate Associates.

For the past 200 years, the Oblate Cross of St. Eugene de Mazenod has been is passed on from one Superior General to the next. When Fr. General met with these Polish lay associates, they got the rare opportunity to kiss and be blessed with that same cross.

The Oblate Cross of St. Eugene de Mazenod is passed on from one Superior General to the other, over the past 200 years. When Fr. General met with Polish lay associates, they got the rare opportunity to kiss and be blessed with that same cross.

Fr. Fernando Velasquez, OMI, a member of the U.S.Province currently attached to the General Administration in Rome, spent part of his time at the recent Inter-Chapter in Poland producing video features about the the meeting. In this 3-minute video, he briefly takes us inside the three translator booths at the meeting. With Oblate leaders from all over the world in attendance, three “official” languages were chosen for the meeting: Spanish, French and English.  All reports were given in one of those languages which were simultaneously translated into the other two for the delegates.

As Fr. Fernando shows us how the translators do their work, we catch a glimpse of two more U.S. Oblates who attended as official translators: Fathers Antonio Ponce and Tom Ovalle.

Enjoy Fr. Fernando’s light-hearted look at the individuals who performed this critical function at the international event.