St. Albert, Alta. _ The remains of three pioneers of the Church in Western Canada have been laid to rest in new graves at St. Albert, the historic heart of Catholicism in Alberta.

Bishop Vital Justin Grandin, Father Albert Lacombe, and Father Hippolyte Leduc were members of the Oblate Missionaries of Mary Immaculate, a French order of priests who came west to serve the First Nations and Metis people and the European settlers who followed. The original mission at St. Albert was founded in 1861 by Father Lacombe, and the Oblate Fathers have served the parish ever since.

Grandin was the first Bishop of the St. Albert Diocese, precursor to the Archdiocese of Edmonton, and the two priests were central figures in the development of parishes, hospitals and schools in the diocese. 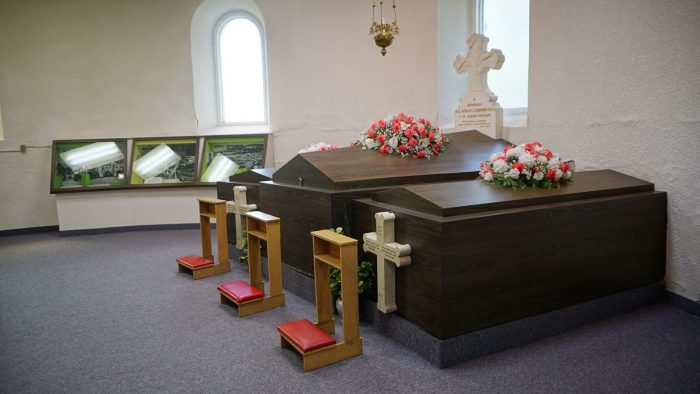 The crypts of Rev. Albert Lacombe, Bishop Vital Grandin and Rev. Hippolyte Leduc are seen prior to the move.
(Lincoln Ho, Grandin Media) 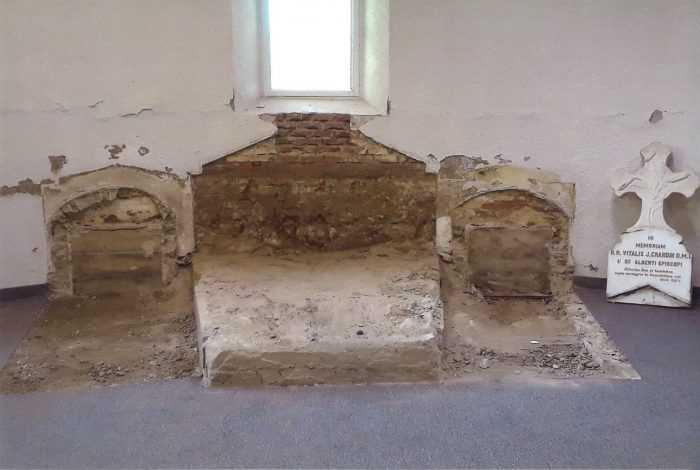 The graves of Father Lacombe, Bishop Grandin and Father Leduc are removed. (Courtesy of Aimee Anderson)

For more than 100 years, the remains of Grandin (1906), Lacombe (1916), and Leduc (1918) had been interred in the crypt beneath St. Albert Church, site of the original St. Albert Cathedral on historic Mission Hill. Although burial crypts are common in European churches, they are relatively rare in Western Canada.

The crypt was part of popular tours every summer, along with the Father Lacombe Chapel, which was constructed in 1861 by Lacombe with local Métis residents and is recognized as the oldest building in Alberta. Every Catholic child who grew up in the area likely visited at least once. The crypt was also a special point of prayer for the hundreds who attended the annual St. Albert Pilgrimage, which marked its 80th anniversary in 2018. And it was a unique source of pride for members of the St. Albert Parish.

But it was only accessible only from the outside and had deteriorated due to moisture seepage and lack of air circulation. Repairs would be costly – and involve moving the caskets.  So the Oblates wanted to transfer them to the nearby St. Albert Cemetery, which has a section reserved for their priests and brothers.

It wasn’t a universally popular decision. Some thought the move would destroy an important part of Alberta’s francophone history. Some thought the crypt should be repaired, whatever the price. Others felt it was simply wrong to disturb the dead.

Aimee Anderson was aware of those deep feelings when she was tasked with coordinating the transfer of the remains. A funeral director with Connelly-McKinley Funeral Homes, she had been appointed to a new role as Director of Catholic Relations in 2014 and developed expertise in meeting the particular funerary requirements for diocesan clergy and religious priests and sisters.

“Professionally, as a funeral director, I couldn’t imagine being involved in anything of this scope and magnitude,” Anderson said. “But that’s little. For me spiritually, it was unbelievable.”

“Whenever we have a disinterment, it’s a big thing for a funeral director, because in our whole lives we try to convey to families how much we value and respect the human remains following death. We do embalming, we dress them and casket them – we treat the remains with such dignity and respect. A 30-year-interment is old, but this was over 100. It was my first – I can’t imagine being involved again in anything of this magnitude; I was so honoured.”

She was also mindful of the current controversy over Grandin and his role in the establishment of Indian Residential Schools.

“Who knows what was said, what was exchanged, what was experienced?” she said. “Judging with today’s eyes is so different, because that many years ago people came from a place of ignorance, even though they were religious, and I think they really believed their call was to civilize people. Evangelization and civilization were kind of entwined in strange ways – not just here, but all over the world. There was that need to make people more like yourself.”

When she was first entrusted with a key to the crypt in September 2018, her first thought was to ask for divine guidance. “I wanted to go in alone and I just wanted to pray. I wanted to pray that if this is not the right thing, if we’re not supposed to be disturbing this, I needed a sign of some sort that it was not going to happen.”

As it turned out, the move was put on hold for several months. Because Grandin had been a bishop, his remains were the responsibility of the Archdiocese of Edmonton. And because he had been declared venerable, Archbishop Richard Smith had to secure permission for the transfer from the Vatican Congregation for the Causes of the Saints, and ensure that a detailed list of procedures for handling the remains was followed. Among the requirements was that “publicity regarding the event is to be avoided in every way.”

It was April 2019 by the time the authorization was settled and Anderson could start the practical work, which included getting the city permits to open the graves and move the remains. But when the funeral directors crew arrived to move the caskets of Lacombe and Leduc, they were met with a surprise. Leduc’s casket was above ground, but Lacombe’s had been buried 1½ metres below, so another crew from Edmonton Catholic Cemeteries was quickly summoned to excavate.

“You couldn’t get a machine down in the crypt; they literally came down with shovels and buckets,” she said.

Lacombe’s grave had been severely compromised by water seepage, but once the crew located fragments of a casket, the funeral directors took over again and gathered the pieces, the few remaining bones, and the surrounding dirt.

The remains of the two priests were quietly buried in new graves on May 8. With that done, work began on Grandin’s tomb, which was constructed from large river rocks and mortar and topped with a thick slab of marble. Anderson worked closely with Rev. Adam Lech, who had been delegated by the Archbishop to oversee the transfer. 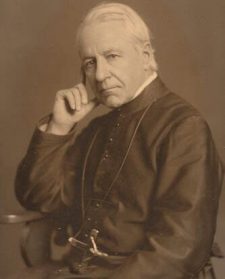 “There were so many protocols in terms of how his remains were to be moved … and I took this very, very seriously,” Anderson said.

“It was a very prayerful process, and I felt that all the people who came to work with me in this process were so unbelievably respectful and reverent, people who are not necessarily Catholic but were so mindful of what they were doing and what piece they played in this part of history. That was a real gift for me to see.

Once the casket was removed from the tomb  ̶  witnessed by Father Lech  ̶  it was sealed and conveyed to the funeral home. There the remains were carefully verified by a medical examiner and placed in a new casket, which was bound with ribbons and seals guaranteeing that nothing had been added or taken away. That part of the process was formally witnessed by a tribunal of 11 people, including priests, professionals, and lay people. Some artifacts that had been on top of the casket, along with a few Grandin artifacts the Oblates had discovered in 1938, were placed in a custom-built miniature casket that would be buried in the new grave.

“As it turns out, my husband builds these, and he was so honoured to make this for Bishop Grandin,” Anderson said. 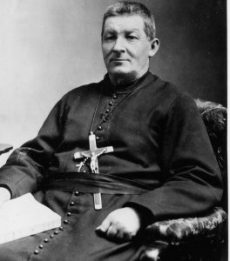 On May 27, Bishop Grandin was buried next to the two priests after a service attended by representatives of the Oblates, the Archdiocese, Connelly-McKinley, and the Alberta Francophone Historical Society. Rev. Alfred Groleau OMI offered a reflection and blessed the grave, Father Lech read from Scripture, and a couple of seminarians working summer jobs at the cemeteries served as pallbearers.

For Anderson, who has worked as a funeral director for 11 years, the project was nothing less than transformative. Her eyes filled with tears as she recalled the cemetery service; finally, she felt affirmed in her role in whole process.

“I felt very strongly the support of the souls of those three priests, that they were OK with what we had done. Because it’s invasive  ̶  can you think of anything more invasive than being dug up after you’ve been laid to rest? And I was gifted, or granted, that unbelievable peace and certainty that they knew from where they were, their souls were totally at peace … with what we had done.

“I felt that peace just rain down as they were being laid to rest. I don’t know how that can’t change your life. It changed my life.” 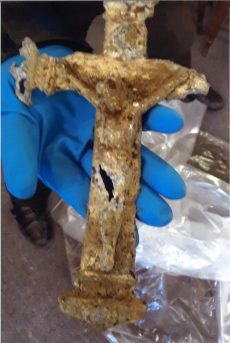 This cross was buried with Father Albert Lacombe. (Courtesy of Aimee Anderson)

The last of the three stone markers was placed on July 26. The new graves are situated next to a road through the cemetery, will allow easier access for disabled people and all those who come to visit and pray on Mission Hill.

That section of the St. Albert Cemetery is now home to the graves of two Oblates who have been recognized by the Church for their ‘heroic virtues,’ meaning that their lives demonstrated consistent efforts to grow in holiness. Bishop Grandin was declared venerable in 1966 and Brother Anthony Kowalczyk in 2013. A venerable person is required to have two miracles attributed to their intercession before the Church recognizes them as a saint.

Brother Anthony, sometimes referred to as ‘God’s Blacksmith,’ served much of his life as a beloved gardener and handyman at Edmonton’s College St-Jean, which is now the French faculty of the University of Alberta.